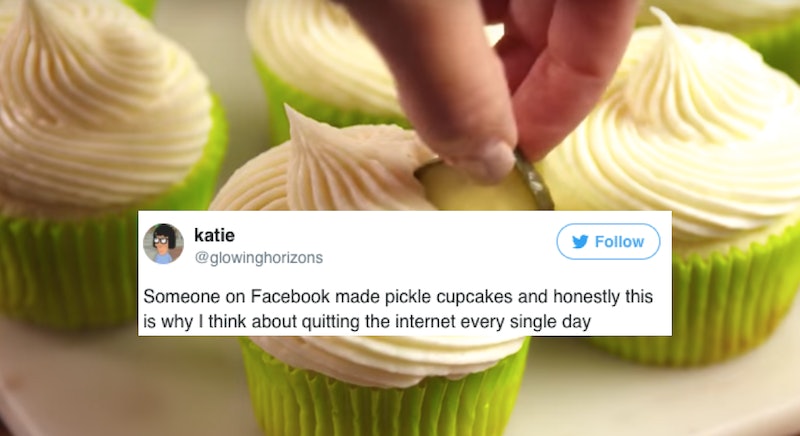 The past few years have marked unprecedented innovation in dessert. The Dawn of the Cronut in 2013 ushered in the Era of Bizarre Hybrid Desserts, from the spaghetti donut to the cupcaron to donnoli (oh my!). Four years on the other side of this era, we as a species have pretty much smushed together any kind of hybrid dessert conceivable — or at least, we thought we did. Today we were all introduced to the real dill of dessert mashups, which may make even the most hardened and experienced of junk food consumers do a double take: pickle-flavored cupcakes.

The recipe, shared by Delish in a video earlier this week, can only be described as nutritional whiplash. In high speed motion, you basically watch everything you've ever known about dessert get shattered right in front of your (kind of literal) salad in just over a minute. The recipe, which aims to combine sweet and salty flavors, calls for ordinary cupcake ingredients combined with sour cream, pickle juice, and actual chopped up pickles, and whiskey. As someone who once worked in a cupcake shop and ate enough bacon-infused cupcakes to say "don't knock it 'til you try it," even I had a momentary shudder of horror watching the moment the pickle pieces got dropped into that otherwise scrumptious looking batter.

WARNING: Your eyes cannot unsee what is about to happen to them.

Delish tops off the recipe with a pickle-flavored cream cheese frosting, and even uses a little pickle for garnish. They also advise that people who are perhaps a little less pickle prone either forego the pickle juice, or put in slightly fewer pickles. (I'm trying to keep an open mind here, y'all, but that just hurt me to type.)

It's a bold but decidedly controversial move; while some people are all for it, fans on both the pickle side and the cupcake side are calling foul. (For the record, I'm #TeamCupcake, and pickles do not deserve her.) The recipe has only been up for three days now, but it has inspired enough Twitter rage to last a lifetime. Brace yourselves, friends. The tweets are coming.

Where words fail, emojis save the day.

When You Can't *Quite* Decide How You Feel

The trouble with something like this is you never know until you try it ... and trying it means you have to actually make it.

HOW MANY PEOPLE WILL PICKLE CUPCAKES HURT?

Adding this to my carefully curated "Ways To Get Revenge Without Looking Vengeful" list, right under subtweeting and leaving rambling voicemails to someone I usually text.

A PSA To All Of Humanity

I personally thought we had gone too far as a species when we all started walking into traffic playing "Pokemon GO" last summer, but this counts, too.

Only the strongest-willed taste buds shall survive.

^ This human right here is braver than I am.

The pickle renaissance has, at least according to one person, officially gone too far. (Pickle juice soda, anybody?)

Hey, at least one person made these and survived to tell the tale!

In any case, Delish seems to be well aware of the controversy surrounding their recipe, given the subtitles on the video — but if the internet has taught me anything, it's that viral baking videos in high speed motion rarely disappoint. Let's all end 2017 on an i-dill note: as people who are brave enough to try pickle cupcakes, and relish every moment.