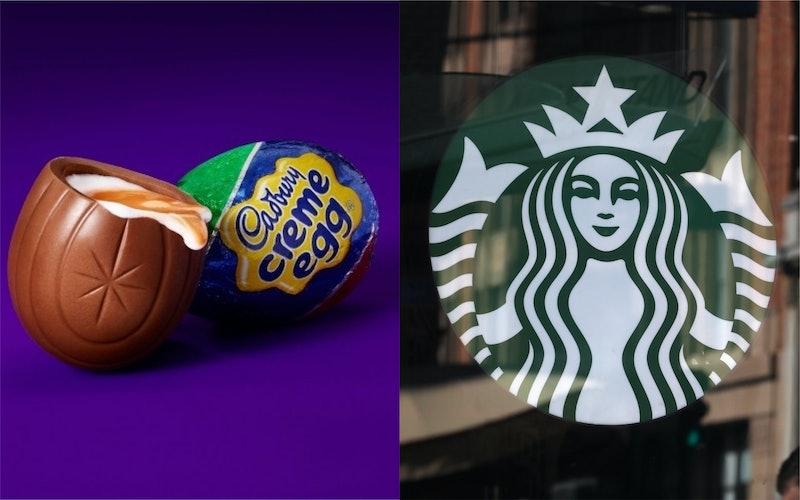 Not too long ago, I spotted something intriguing on the Leaf Rakers Society Facebook page: A photo purporting to show a Cadbury Crème Egg-flavored Frappuccino. Naturally, I decided immediately that I needed to know how to order a Cadbury Crème Egg Frappuccino, so I did a little investigating. And hey, guess what? It turns out that the recipe for the Cadbury Crème Egg Frappuccino is available on the Starbucks Secret Menu website. Provided that your local Sbux has all the ingredients necessary to make it, you, too, can order yourself a Frapp that reportedly tastes just like the chocolatey, egg-shaped Easter treat that arrives on shelves each spring. Sometimes, the internet truly is a magical place.

Initially launched circa 2012 (according to its WHOIS records, at least), the unofficial Starbucks Secret Menu website gathers together all sorts of spectacularly-themed treats you can get at Starbucks by placing particular orders — treats that might taste like anything from Captain Crunch to Butterbeer. But although the website has a wide range of drinks on it, including hot and cold options, tea- and coffee-based drinks, and lattes and Refreshers (hi there, Pink Drink), it’s probably best known for its Frappuccino recipes. And to be fair, it’s hard to turn down the appeal of a Peanut Butter Cup Frapp… or the, uh, uniqueness of a Skittles-flavored Frapp.

To each their own.

The thing to remember about the Starbucks Secret Menu, of course, is that it’s by no means official. The website is full of fan-submitted creations, so as a result, you can’t just go up to a barista at your local Starbucks and ask for a Secret Menu drink by name. (Since it’s not a drink Sbux’s baristas are trained to make, odds are they won’t even know what it is, let alone what goes into it.) However! Thanks to Starbucks’ endlessly customizable menu, you can get yourself a Cadbury Crème Egg Frapp (or any other drink on the Secret Menu)… if you place the right order with the right specifications.

The Cadbury Crème Egg Frapp’s recipe, which arrived on the Starbucks Secret Menu sometime around 2013, is a bit complicated, so if the idea of walking up to a barista and verbally communicating the whole thing is intimidating to you (it certainly is to me), you might think about ordering via the mobile app instead. Then you can just go pick up the drink when it’s ready without ever having to talk to a soul.

Here’s what to order for a Grande-size Cadbury Crème Egg Frappuccino: