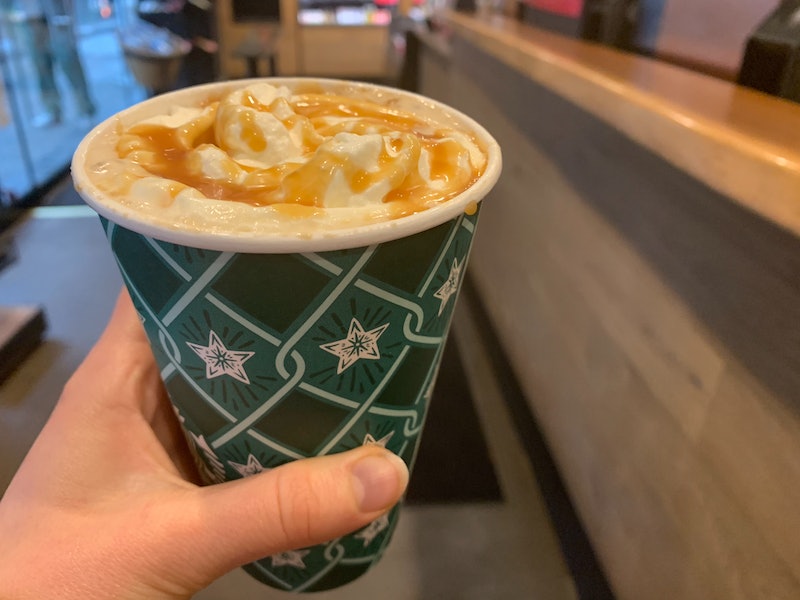 There is very little that a human could ask for that Starbucks does not already provide. The chain has basically covered breakfast, lunch, dinner, noonsies, elevensies, and every other meal, both human and hobbit, with its vast menu; it has come up with an array of drinks so plentiful that it has covered every enchanted creature from the Unicorn, Mermaid, and Witch Frappuccinos; it carries everything, it seems, but one thing — a cookie butter latte. But as is turns out, you can order a cookie butter latte at Starbucks pretty easily; you just have to know how to ask for it. And thanks to a recent "secret menu" reveal, that is exactly what I did.

The "secret menu" at Starbucks is probably the least secret thing on the internet by now, especially since innovative Starbucks drinkers add things to it on the daily. Drinks on the "secret menu" are basically just customizations to existing drinks involving Starbucks' arsenal of syrup, whipped cream, topping, and base options. While there are more than a few cookie butter latte suggestions, one of the best comes by way of a reddit thread on r/starbucks, where a Starbucks employee shared a combo for cookie butter bliss for the masses.

Here's what you can order, per the post: "A soy white chocolate mocha with two pumps white chocolate, one pump toffee nut, and one pump cinnamon dolce. Whipped cream, and caramel on top."

Of course, there's no ~right~ or ~wrong~ way to order off the "secret menu," but the customization suggestions for cookie butter seem to involve toffee nut and cinnamon dolce specifically, which makes sense for the caramel-y, gingerbread-like taste of cookie butter.

Enter my one-woman mission today to cookie butter or bust.

Since this does involve so many customizations, here is my advice: order from the Starbucks app. Here's how to do it.

Pull Up The White Chocolate Mocha

From here, you can toggle all of the different options.

For this, it meant altering the milk, toppings, and drizzle options (and, since I'm lame, switching it to decaf). The screenshot above is how it looks in the end, per the first redditor's suggestion.

On second thought, perhaps human beings were not meant to wield this kind of power.

I have to say, it really does taste like cookie butter, so props to the suggestions from the reddit post. At least, it tastes like cookie butter in the first few sips; after that it sort of takes on that ambiguous hot sugar coffee taste that all syrupy drinks do. I think if I had the chance to do this all over again — which, considering the customizations on this brought it to over $7 (!!), I probably shan't — I'd lean a little more into the cinnamon dolce syrup, and probably dust it with some cinnamon over at the counter, too. But as is, it was pretty delicious — the caramel drizzle on top really enhanced the cookie butter-ness, too, once it melted into the drink.

Anyway, no need to thank me for my heroics — just maybe send me a loud ping so I wake up from the sugar crash that's about to hit in three ... twooooo ...