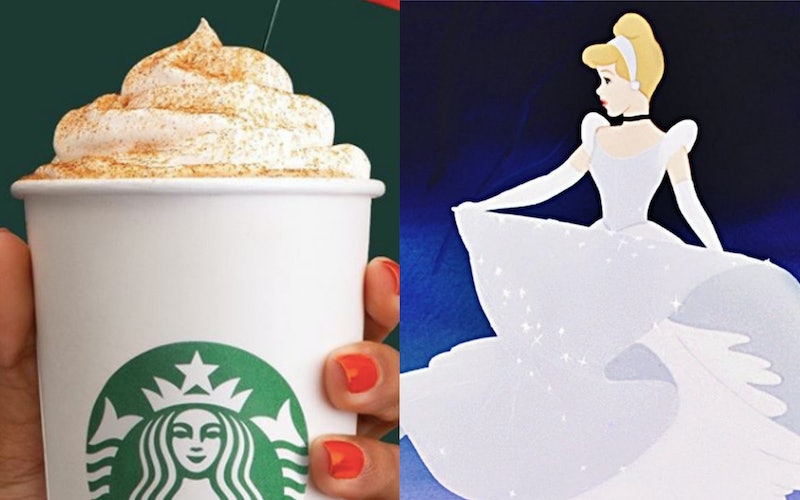 One of Starbucks’ advantages as a coffee purveyor is the flexibility of its drinks menu. No matter which way your tastes lean, you can customize virtually anything to make the perfect drink for you — a quality which has led to the creation of countless “secret menu” drinks you can get at Starbucks, as long as you know exactly what to order. The one catch, though, is that the ingredients have to be in season—so if you’re going to learn how to order a “Cinderella Latte” at Starbucks, as it’s known, you’re going to have to act fast: Since it uses the Seattle-based coffee giant’s fabled Pumpkin Sauce, you can only get it for as long as the Pumpkin Spice Latte is around.

The Cinderella Latte isn’t totally new; typically credited to Instagrammer HappiestTeesOnEarth (which, it should be noted, is the Instagram account for a delightful apparel brand full of Disney-inspired designs), it started making the rounds last year, during the 2018 Pumpkin Spice Season. According to a post on the HappiestTeesOnEarth Insta page published in October 2018, they came up with the drink as part of a series of Disney-inspired beverages they created during their seven years as a Starbucks barista in the Seattle area. The Cinderella Latte got its name from its use of Pumpkin Sauce and White Chocolate Mocha Sauce — wrote the Instagrammer, “the white pumpkin reminded me of Cinderella’s coach.”

The drink picked up a bit of steam around the internet at that time, appearing both in posts made to the Starbucks Leaf Rakers Society Facebook group and on regular websites ranging from Barista Life to The Kitchn. And now that it’s officially Pumpkin Spice Season again, the unofficial drink has made quite the comeback — leading, of course, to many questions about how exactly one orders it.

As is always the case with “secret menu”-type drinks, though, you can’t just walk up to the counter at your friendly neighborhood Starbucks and ask for a Cinderella Latte; since it’s not an official company recipe, your barista probably won’t know what you’re talking about. But thanks to Starbucks’ eminently customizable menu, it’s not at all difficult to get your hands on a Cinderella Latte — if you place the order correctly.

There are loads of other ways you might order the drink, too, of course; the important thing is its sauce choice: You can’t have a Cinderella Latte without Pumpkin Sauce and White Chocolate Mocha Sauce. Beyond that, though, it’s totally up to you; heck, you could even try ordering a Pumpkin Spice Crème Frappuccino with White Chocolate Mocha Sauce included to create a coffee-free version of the whole thing. No matter what you do, though, it’s bound to be delicious.