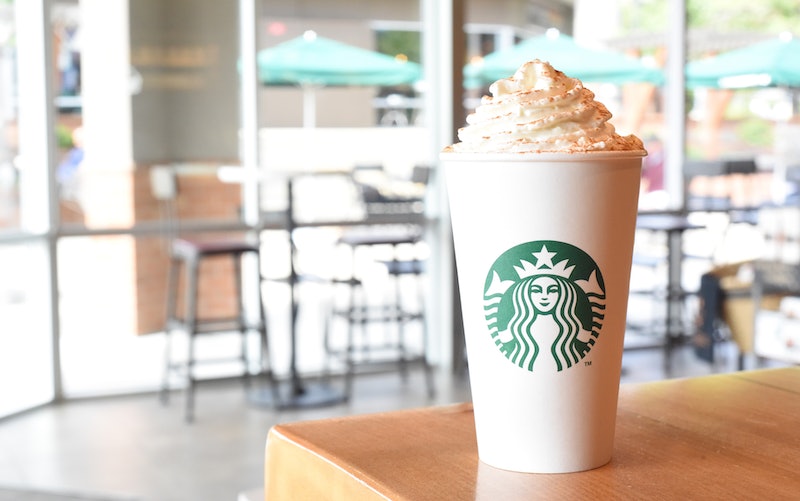 Well, fall-loving friends, it’s official: The Starbucks Pumpkin Spice Latte’s 2019 release date has been announced. The coffee giant’s autumnal espresso beverage (and all of its variations) will be returning on Aug. 27 — just a little under a week away. It might not quite be sweater weather yet (I don’t know about you, but where I am, it’s still 90 degrees most days), but, I mean, let’s go ahead and get Pumpkin Spice Season started anyway. It is, after all, the most wonderful time of the year.

Starbucks started teasing the beloved beverage’s return on Aug. 6 in a series of riddles posted to the Leaf Raker’s Society Facebook group. (Remember the Leaf Raker’s Society? The closed “secret” group debuted in anticipation of 2018’s Pumpkin Spice Season — and, lo and behold, it’s still very much active a year later. It is also one of my favorite corners of the internet. Fellow Leaf Rakers, I salute you.) Released once a week for three weeks, each riddle’s solution turned out to be a number — and when all three numbers were put together, they revealed the PSL’s arrival date for 2019: 8/27, or Aug. 27.

Although Starbucks’ version of the Pumpkin Spice Latte is now celebrating its 16th full season, the fervor surrounding its annual release date announcement — not just the release date; the actual announcement of the date itself — is a more recent development. Beginning in 2011, the company began creating “special online experiences,” as a press release later put it, that granted fans the ability to order the drink before its official release date. The gamification of the PSL’s arrival kicked up even more in 2014, when the official Pumpkin Spice Latte Twitter account was created to facilitate an online scavenger hunt which, when completed, yielded that year’s early access code.

As time has gone on, Starbucks has upped the ante a little more each year, coming up with gimmick after gimmick to build as much anticipation for the PSL release date announcement as we’ve all historically experienced for the PSL itself. In 2015, those who gained entry to the mysterious Orange Sleeve Society were gifted with little, knitted, orange coffee cup sleeves that essentially functioned as sweaters for your PSL. In 2017, a Facebook Live video that streamed continuously for days heralded the “hatching” of the Pumpkin Spice Latte. In 2018, there was the Leaf Raker’s Society, which some view as the natural progression of 2015’s orange sleeve stunt. And in 2019, we’ve had three weeks of riddles to solve.

Does two times make a trend? Not necessarily. If the company does something similar next year, though, I would argue that yes, it’s a trend.

But honestly? I’m not mad about it. I love fall. I love pumpkin. I love warming spices. And I love coffee. Yes, seasonal and holiday “creep,” as it’s called, can sometimes be an issue — but, you know, let’s just let everyone who loves fall, and pumpkin, and warming spices, and coffee, and PSLs enjoy their beverages freely. Sometimes it’s the little things, you know?

The Starbucks Pumpkin Spice Latte will return to participating stores for a limited time on Aug. 27. In the meantime, you can also pick up a whole bunch of Pumpkin Spice products right at the grocery store. Happy Pumpkin Spice Season!