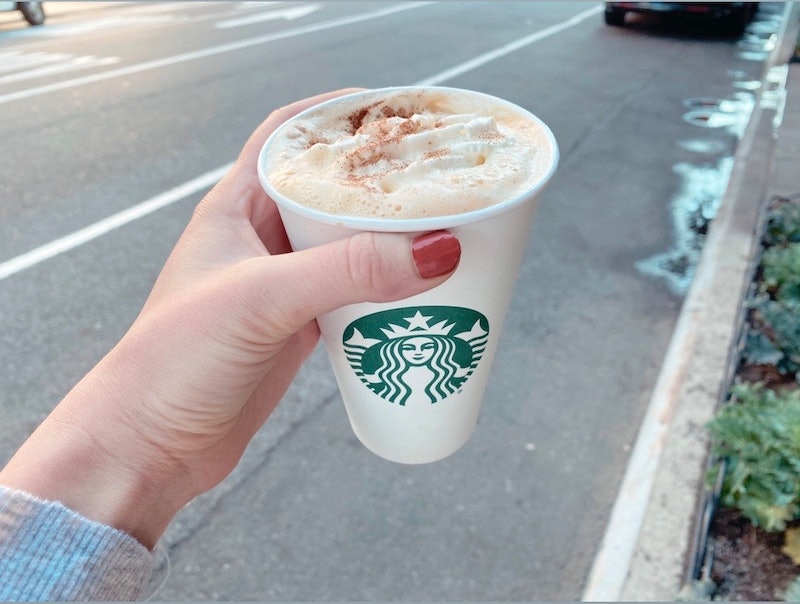 Fall may be in full swing now, but its delicious pumpkin bounty has only just begun. If you're also at the point where your organs are just swimming in the pumpkin sauce from the PSL and loosely held together by the remnants of a pumpkin scone, allow me to introduce you to the nail in your autumnal coffin: the Starbucks Pumpkin Birthday Cake Latte that you can all too easily order from the Starbucks secret menu. It's basically what would happen if the PSL and a slice of birthday cake copulated and its offspring was immortalized in hot beverage form.

Starbucks has plenty of "secret menu" items, but this latte differentiates itself in two major ways: One is that it will, unfortunately, only be available in fall, or for as long as the pumpkin sauce supplies at your local Starbucks last. The other, much more fortunately, is that this secret menu item is super simple to make, and won't put any undue pressure on your barista when you ask for it — so long as you are super succinct.

If you're ordering the Starbucks Pumpkin Birthday Cake Latte from the app, it takes care of that for you. All you have to do is pull up a Pumpkin Spice Latte on the in-app ordering menu, and make a few careful swaps. For a Grande, there are four pumps of pumpkin sauce included. To make it a Pumpkin Birthday Cake Latte, delete two of the pumps of pumpkin sauce, and add one pump of vanilla syrup, and one pump of hazelnut syrup. (You'll also see that I added some Cinnamon Dolce Sprinkles to mine, which is also a festive birthday cake-esque option at your disposal.)

Here's a screenshot of what it should ultimately look like if you order it from the app.

If you're ordering in person, just ask for a Grande PSL, but ask for two of the pumpkin sauce pumps to be swapped out for a pump of vanilla and a pump of hazelnut.

We went ahead and ordered ourselves the Starbucks Pumpkin Birthday Cake Latte, and the consensus is that it is delicious. The vanilla really gives it that perfect "birthday cake" taste, and the slight hazelnut of it really amplifies the vanilla. It's just as sweet as the PSL is on its own, but with an interesting new flavor profile that makes the pumpkin in it less aggressive.

If you're looking to cram as many fall-flavored beverages into your mouth as you possibly can before winter is upon us, then you should know that this is the mere tip of the iceberg for Starbucks lovers this year. Starbucks recently published a post with fall drink hacks that included how to order a Caramel Apple Pumpkin Spice Drink — essentially a shakeup of Starbucks' most underrated (and admittedly not caffeinated) offering, its Caramel Apple Spice Drink. Also on the list of pumpkin spice drinks worthy of your attention this autumn is the Great Pumpkin Latte, a version of the PSL based on the beloved Peanuts comics that swaps out half of the pumpkin sauce for toffee nut syrup (run, do not walk, y'all). Also soon to disappear at the stroke of midnight? The Cinderella Latte, which also subs out some pumpkin sauce in favor of White Chocolate Mocha sauce.

Just be sure to get your pumpkin spice-loving self over to Starbucks sooner rather than later — once the chain finishes up with the pumpkin sauce for the season, these drinks will poof into magical pumpkin dust.

More like this
Dunkin’s Pumpkin Spice Latte Is Officially Back This Week
By Mia Mercado
I Tried The $20 TikTok Viral Oishii Strawberries — Here's What I Thought
By Sophie Hanson
The 8 Best Chew Bones For Puppies, According To A Vet
By Andrea Hannah
Lotus Biscoff Does A Biscuit-Chocolate Hybrid Now
By El Hunt
Get Even More From Bustle — Sign Up For The Newsletter