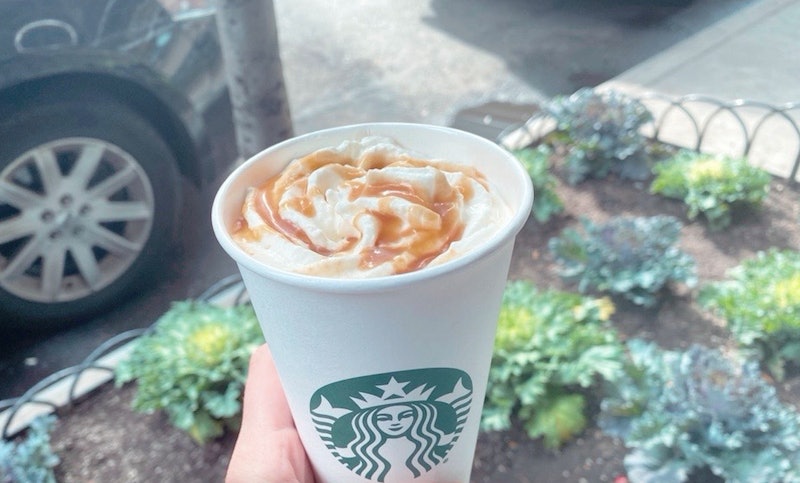 Just when you think we've outspiced ourselves for the season, it turns out there's yet another delicious pumpkin-themed drink you can get. It's technically on the "secret menu" at Starbucks, but its spot just got deliciously blown up by Starbucks itself — the Caramel Apple Pumpkin Spice Drink at Starbucks is apparently so special that the company wrote about it in a recent post on Starbucks fall drink hacks for 2019. It's basically what happens when you mash two of the best parts of fall into a cup and then pour a boatload of whipped cream and caramel onto it, and luckily, it's ridiculously easy to ask for.

If you're not already familiar, Starbucks offers a Caramel Apple Spice Drink, which is "steamed apple juice complemented with cinnamon syrup, whipped cream and caramel sauce drizzle." It probably doesn't get as much love because it isn't a coffee or tea drink, and also doesn't have caffeine, which usually earns a Starbucks drink top billing. But don't sleep on this delicious twist on cider — not only is it delicious on its own, but it can be customized into a Caramel Apple Spice Pumpkin Drink so delicious that you might never want regular cider again.

There are two versions you can get. Starbucks recommends simply ordering a Grande Caramel Apple Spice Drink and asking for two shots of pumpkin sauce in it. Alternatively, since the drink already comes with four pumps of cinnamon syrup in it, you could ask for the barista to swap two of the pumps of pumpkin sauce. Either way, you end up with this yummy (and, as always, super Instagrammy) concoction.

I went ahead and ordered the drink myself (because journalistic integrity, y'all), and we ordered it the way Starbucks recommended. It is every bit as sweet as you'd expect it to be, it isn't an overpowering sweetness — the pumpkin flavor does a subtle but effective job of adding some depth to the flavor of the apple juice and cinnamon syrup. Plus, is it just scientific fact that all drinks taste better with a glob of whipped cream and caramel on top, which I will argue is essential to this fall drink experience.

This is far from the only drink on the Starbucks secret menu for fall this year. Pumpkin lovers went wild for the Cinderella Latte, another customized drink that swapped out some of the pumpkin sauce in a PSL for White Chocolate Mocha Sauce. Another popular favorite of this year was Bustle's own Great Pumpkin Latte, based on the beloved Peanuts comics, which swapped out some of the PSL's pumpkin sauce for toffee nut. And if that isn't enough to get you in the spooky season, there's a Jack Skellington Frappuccino, an Oogie Boogie Frappuccino, and a Sally Frappuccino from The Nightmare Before Christmas to tide your spooky sweet tooth over.

In the meantime, you can also check out Starbucks' other fall drink hacks on its website. Just remember to order them sooner than later — once the pumpkin sauce is gone for the year, so are all the autumnal drink twists that come along with it.

More like this
Are We Drinking Rosé All Wrong?
By Sheila Yasmin Marikar
TikTok's Favorite Bartender Thinks Mimosas & Bloody Marys Are Out For Brunch
By Alexis Morillo
If Your Refrigerator Is A Mess, These 25 Organizing Products Can Help
By Courtney Young
Here’s What Sarah Jessica Parker’s Canned Cosmo *Actually* Tastes Like
By Emma Garza
Get Even More From Bustle — Sign Up For The Newsletter