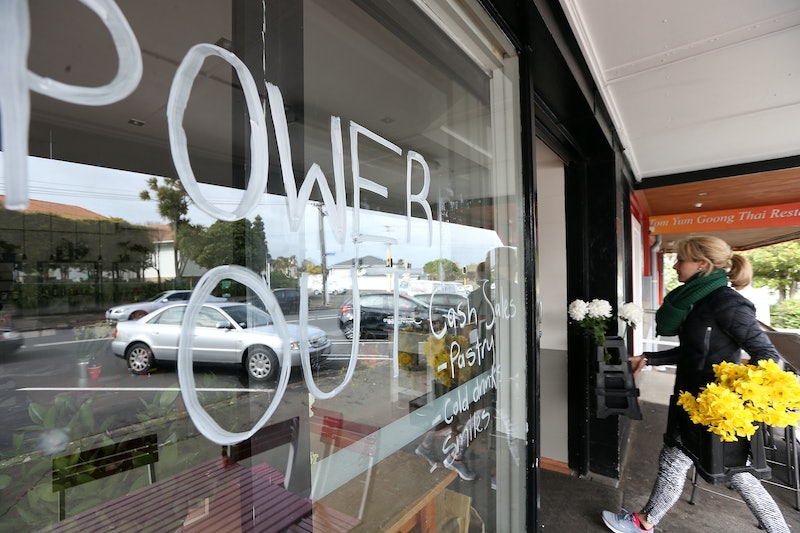 While power outages due to weather are common, preemptively shutting off power ahead of bad weather in order to prevent an additional disaster is rare. But after 2018's devastating California wildfires, that's exactly what power companies are doing. If you live in one of the areas affected, knowing exactly how to prepare for mandatory power outages ahead of time is key.

The Los Angeles Times reported that California electric company PG&E planned the largest proactive power shut off ever in an attempt to reduce the chances of high winds and electrical equipment starting a fire. "As we have said throughout this process, PG&E shares the court’s focus on safety and recognizes that we must take a leading role in reducing the risk of wildfire throughout Northern and Central California," PG&E told the Los Angeles Times in an emailed statement. The move comes after the utility company said damage to its equipment could've contributed to some of the deadliest wildfires in history. In particular, the Camp Fire, which began Nov. 12, 2018, completely destroyed the Northern California town of Paradise and killed more than 85 people.

Many people in Northern California were not prepared for the latest outages that have already begun, and The New York Times described mass chaos as people scrambled to get supplies and protect everything from frozen breast milk to millions of dollars of research at UC Berkley. The paper reported that 2.5 million people in Northern California could be affected as power is turned off and restored based on wind conditions.

Most recently in Southern California, a new wildfire dubbed the Saddleridge Fire ignited Oct. 10, 2019 in the San Fernando Valley outside of Los Angeles, and power companies in the area say there's a chance residents' power could be shut off, potentially affecting 170,000 people, USA Today reported. In addition, more than 34,000 people living in San Diego are also ask risk for power shut offs.

Most people don't realize how much they rely on electricity until it's gone. After a series of earthquakes earlier this year where I live in California, for example, I realized I was not at all prepared for an emergency. I have since put together a disaster kit that will allow me and my pets to survive for several days without electricity. By doing a little preparation in advance you can avoid panicking when the lights go out. Here's how to prepare:

More like this
Ashamed Of Your Screen Time Stats? Here's How To Change That
By Alexis Morillo
6 Anti-Police Brutality Organizations You Can Support Right Now
By Syeda Khaula Saad and JR Thorpe
These 4 Zodiac Signs Make The Best Bridesmaids
By Nina Kahn
These Artists Are Reimagining Black History Month To Create A Better Future
By Katie Mitchell
Get Even More From Bustle — Sign Up For The Newsletter
From hair trends to relationship advice, our daily newsletter has everything you need to sound like a person who’s on TikTok, even if you aren’t.