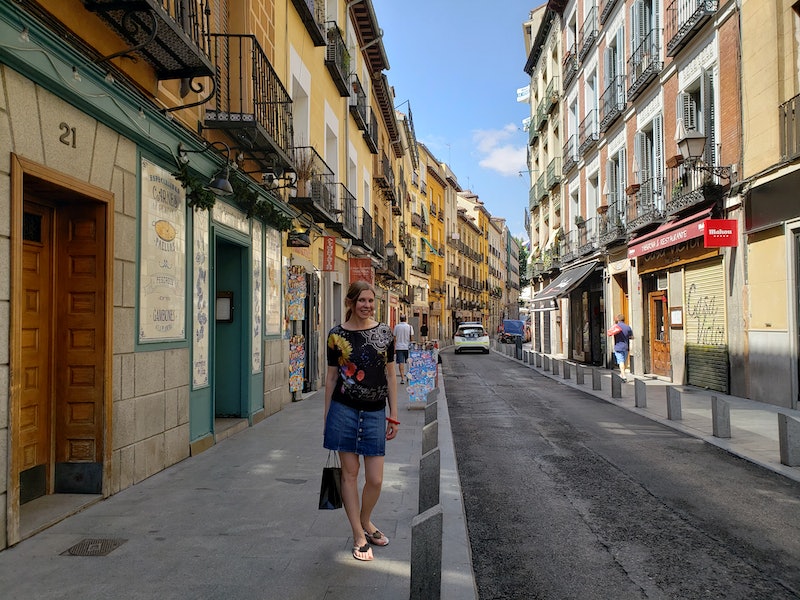 Although it’s the type of city you may want to spend as much time as possible in, if you only have a weekend in Madrid, you can still see a lot of the city.

On a Saturday night, I was surrounded by 101 shades of ham — from bubblegum pink, like in America, to a dark maroon tone that Madrid’s known for — jamon serrano and jamón ibérico. Men behind butcher counters sliced the meat right off the bone. It was standing room only at the Museo del Jamon (Museum of Ham), which has become an iconic chain, yet I mostly heard people speaking Spanish around me. The only tourists I saw were those in my SANDEMANs Tapas Tour — and, in case you’re a vegetarian like the guy next to me was, they serve plenty of fresh bakery bread and local cheese, too.

On the tour I tried Spanish tortilla, a local staple, almost like quiche and made from potatoes and eggs, as well as croquettes. I drank tinto de verano with it, which looks like sangria, but has different ingredients. Instead, the former is made from red wine and Fanta soda and it quelled the perpetual thirst that comes from the 100-degree temperatures that are common during Madrid summers.

We stopped hole-in-the-wall restaurant, which looked like an art studio, bright colors everywhere, and had about 10 tables. It served as our introduction to paella, which has a rice base with an assortment of seafood and chicken and, like tapas, a must-eat dish while in Spain.

If you're in Madrid or a day or two, the two-hour tapas tour is perfect for introducing you to local foods while also introducing you to a local person, your tour guide. But before you start drinking and filling up on tapas, there are other things you should do during your short stay in Spain’s capital city.

I'd been to Madrid in the winter before, but this visit was in July after Barceló Torre de Madrid offered me the opportunity to stay for the weekend. The affordable boutique luxury hotel, is just a few steps from the “Broadway” of Madrid, Gran Via, a street full of everything from theaters to your favorite shops. Aside from getting a room with an amazing view of “Broadway,” the décor, too, is so welcoming that you almost don’t even want to leave the hotel.

But of course, I did venture out into the city. Here are the things I did and that I’d recommend if you have just a couple days in Madrid.