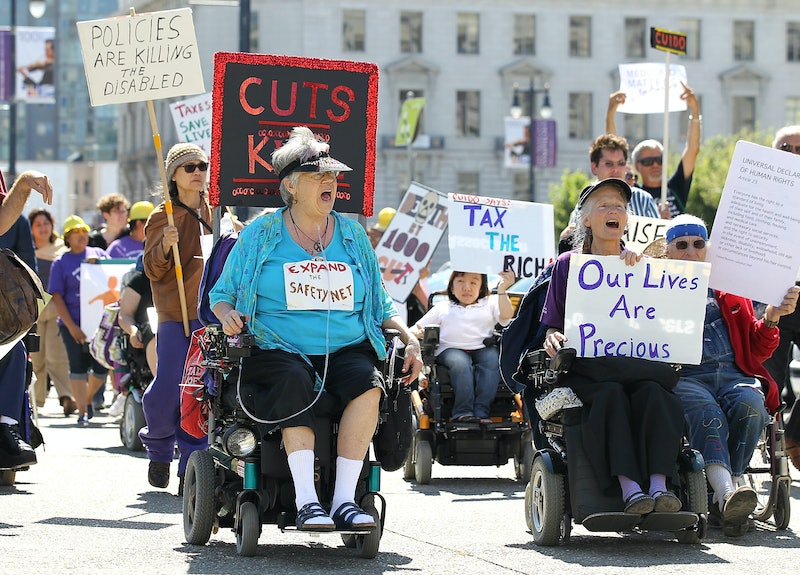 In his first week in office alone, Donald Trump has signed numerous executive orders that have dire consequences for millions of Americans. It's more important than ever now to stand up for all people at risk under his policies, including the disability community. There are many ways to support disabled people under Trump and his administration, which has shown very little regard or care for what is at stake for one of the most overlooked marginalized groups when it comes to discussions of diversity and inclusion. As someone who's lived with a disability for 24 years, I'm absolutely enraged with the way Trump and his administration have been treating my community's needs — and, to be perfectly honest, I'm terrified of what the next four years might bring.

Consider, for example, the Affordable Care Act: During his first week as president, Trump took the initial steps toward repealing repealing the ACA, a decision that could potentially take away health care coverage from 18 million people who need it (not to mention the fact that health care should be a fundamental right, not a privilege). While it's not yet clear exactly what Trump is planning to replace the ACA with, Tom Price — the president's nominee for the Department of Health and Human Services — has previously made suggestions for a health policy where people with "pre-existing conditions" would have a difficult time getting health coverage. As TIME recently explained, Price's "continuous coverage" provision would mean that "if you have a pre-existing condition but haven't had a recent gap in your health coverage, insurers could not discriminate against you" — but if your coverage lapses, it could be much harder to get covered again later. Although this would of course be a concern for many people, people with disabilities would be particularly vulnerable in this situation.