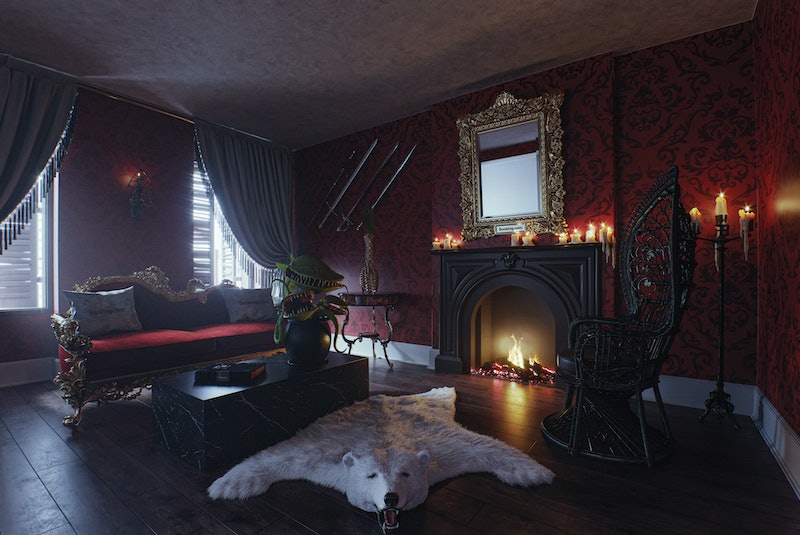 If you’ve ever wanted to spend the night in the Addams Family’s mansion, I have excellent news: You can now! In honor of the new animated Addams Family movie, which hits cinemas on Oct. 11, Booking.com has recreated the creepy, kooky, mysterious, and ooky family’s home in a new listing located in New York — but there’s a catch: Bookings will only be available for four nights at the end of October. Reservations will open up at 12 p.m. ET on Oct. 28, so put a reminder in your calendar and set an alarm; those four nights are likely to go incredibly quickly.

Created by cartoonist Charles Addams, the Addams Family — patriarch Gomez, matriarch Morticia, their children Wednesday and Pugsley, relatives Uncle Fester, Grandmama, and Cousin Itt, other assorted friends and loved ones, including Lurch the Butler and the disembodied hand/family pet Thing — took a satirical look at the American family in the 20th century. Originally appearing as single-panel comics in The New Yorker beginning in 1938, the off-beat and hilarious family have gone on to become a staple of American pop culture; from their hit television show during the 1960s to the series of feature films that took them to the big screen in the 1990s, the Addamses have proven themselves to be timelessly relevant — and now, they’re back again. In the animated Addams Family flick scheduled for release this week, though, they’re tackling a horror unlike any other they’ve faced before: Moving to New Jersey.

So, to celebrate, Booking.com has a fun new property on offer for four days, and four days only: The Addams Family Mansion. Situated in Brooklyn’s Clinton Hill neighborhood, it brings the Addams’ home to life—and yes, you’ll actually be able to stay overnight in it. It is perhaps worth noting that the exterior of Booking.com’s version of the Addams’ home doesn’t look quite as mansion-like as the spooky family’s abodes usually do; however, affordably-priced mansions are hard to find in Brooklyn, so this oversight can perhaps be forgiven. Besides, it is still a delightful-looking, 19th century townhouse — and at 3,700 square feet, it is far, far larger than your typical New York apartment. (For comparison purposes, the New York Post reported in 2015 that the average studio apartment in New York is just 550 square feet.)

With a total of three bedrooms, the Addams Family Mansion can accommodate up to four guests. The Master Bedroom — which, naturally, is the room which Gomez and Morticia would call their own — boasts a king-size bed with a spectacularly gloomy canopy and some, uh, snakes (made of rubber, probably); Pugsley’s Room features a queen-size bed, a bear trap, and a number of explosive devices (all hopefully non-functioning); and Wednesday’s Room sees you sleeping in a twin bed with a pretty gnarly-looking guillotine positioned where most other beds feature a regular headboard. All of the rooms also house tons of macabre toys to play with, from haunted-looking dolls and dollhouses to literal balls and chains.

There’s a drawing room, too, of course; wallpapered in red damask, it’s decorated in “true Addams Family fashion,” as the Booking.com listing puts it, including an elegant red and gold sofa, swords on the walls, a bearskin rug, and a selection of Morticia’s prized carnivorous plants. Other bells and whistles include “spooky snacks,” branded amenities, and a screening of the new Addams Family movie itself. And, of course, since you’ll be located in one of Brooklyn’s most vibrant neighborhoods, you can always venture outside the mansion to take part in any other spooky fun that might be going on elsewhere during your stay.

Reservations will open at 12 p.m. ET on Oct. 28 for stays on Oct. 29, 30, and 31, as well as Nov. 1 — and, alas, those four nights are the only nights that this creep-tastic property will be available. But, hey, if you miss out, you can always console yourself with a stack of “Wednesday’s Web-Cakes,” AKA buttermilk pancakes topped with icing made to look like a spider web; IHOP has an entire Addams Family-themed menu available until Nov. 3. Or, if the idea of icing-topped pancakes doesn’t do it for you, you can always drown your sorrows in a cup of Morticia’s Haunted Hot Chocolate if you like.

You’ve got options, is what I’m saying.

If you do want to throw your hat in the ring for a night at the Addams Family Mansion, head to Booking.com to check out the listing. Good luck, spooks!

More like this
This Creepy TikTok Trend Encourages Out-Of-Body Experiences
By Kaitlyn Wylde
What Is The Forest Personality Test? The TikTok Trend, Explained
By Georgina Lawton
TikTok Is In Its Elle Woods Era
By Meguire Hennes
13 Selfie Instagram Caption Ideas That Exude Main Character Energy
By Jessica Booth and Emma Carey
Get Even More From Bustle — Sign Up For The Newsletter