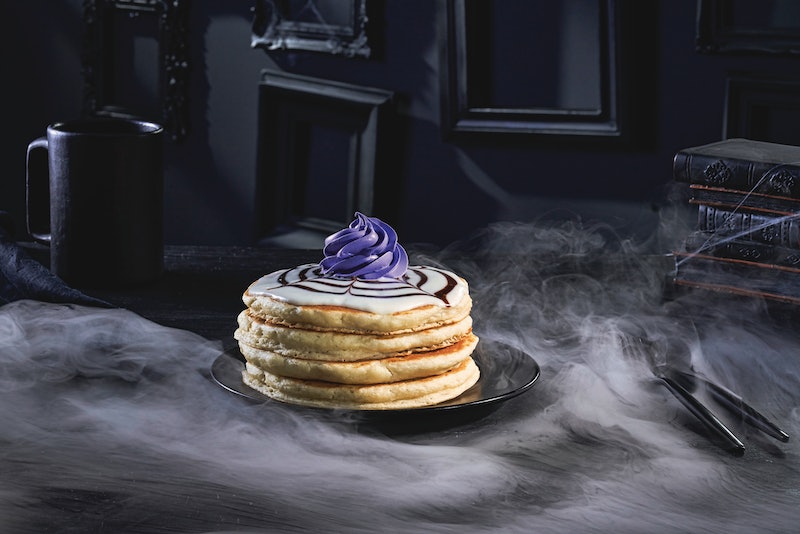 Calling all breakfast enthusiasts who also happen to be all together ooky: An entire Addams Family menu just launched at IHOP, and it’s full of delightfully spooky treats. Did you, like myself, grow up cultivating a Wednesday Addams aesthetic which you have somehow managed to adapt into a somewhat acceptable adult persona? Then these pancakes are for you. The menu arrives on Sept. 16 ahead of the new, animated Addams Family movie hitting theaters in October; what’s more, it’ll be available through Nov. 3, allowing you to indulge in the spookiest of breakfasts throughout the entire Halloween season. Yes, please.

Based on the characters originally created by cartoonist Charles Addams and published regularly in the New Yorker between 1938 and 1988 — and, subsequently, the live-action television series that ran on ABC from 1964 to 1966, numerous animated incarnations, and, of course, the now-iconic Addams Family movies of the early 1990s — the 2019 film will see the creepy, kooky, mysterious, and spooky family finally hit the big screen again (the last time they hit the cinema was for 1993’s Addams Family Values). This time, they’re moving to New Jersey — which, to be honest, seems like a place the Addamses would find just weird enough to make for a comfortable home — and simultaneously dealing with a greedy and obnoxious reality TV host and prepping for a major family celebration.

As has become the norm for high-profile animated films, the voice cast includes a number of notable names, including Oscar Isaac as Gomez, Charlize Theron as Morticia, Chloe Grace Moretz as Wednesday, Finn Holfhard as Pugsley, and Allison Janney as Margeaux Needler, the villainous reality TV host. It’s scheduled to hit cinemas on Oct. 11 — and IHOP’s Addams Family menu will be launching about a month before that in honor of the whole thing.

Said Alisa Gmelich, IHOP’s vice president of marketing, said in a press release provided to Bustle, “Halloween, and the months leading up to it, are filled with such unadulterated fun for families, so it made perfect sense for IHOP to get in on the action.” She continued, “The quirkiness of The Addams Family matches our own playfulness as a brand, so a partnership with MGM felt like a great fit.”

The result, as Gmelich describes it, is a collection of IHOP’s “most quintessential menu items” — think Buttermilk pancakes, omelettes, and milkshakes — with “a signature Addams Family twist.” Said Gmelich, “Our culinary team had a lot of fun playing around with distinctive flavors and eye-catching colors to create a menu that will be delightfully spooky and delicious to families of all ages, including grown-up kids, all month long.” The Addams Family menu will be available starting on Sept. 16 and trucking on through Nov. 3.

The lineup includes a little something for everyone, whether you’re into sweet breakfasts or savory ones — or both! On the sweet side of things, we’ve got Wednesday’s Web-Cakes, which top a stack of IHOP’s signature Buttermilk pancakes with cupcake icing, a web drawn on top of said frosting with Hershey’s chocolate syrup, and violet whipped topping. Meanwhile, on the savory end, we’ve got Gomez’ Green Chili Omelette, which fills and tops a fluffy IHOP omelette (fun fact: IHOP adds a touch of pancake batter to the eggs when they make omelettes; the result is an omlette that’s almost as fluffy as their pancakes usually are) with marinated pulled pork, jack and cheddar cheese, fire-roasted peppers and onions, green chili verde sauce, and a dollop of sour cream. And if you like both savory and sweet items in your breakfast choices, you can have 'em both at the same time with the Kooky Kids’ Combo: It consists of a Wednesday’s Web-Cake, a scrambled egg, and your choice of either one bacon strip or one pork sausage link. (Yes, it’s on the kid’s menu, but that doesn’t mean you can’t order it as an adult. Related: Ask me about the time two weeks ago when I absolutely had a Happy Meal for lunch.)

But that’s not all that’s on the IHOP Addams Family menu; you’ve also got two drinks — or desserts, depending on how you feel about these kinds of items. First, there’s Uncle Fester’s Chocolate Ice Scream Shake; then there’s Morticia’s Haunted Hot Chocolate. To be fair, both of these items look like typical IHOP items dressed up with violet whipped topping and a Hershey’s chocolate syrup drizzle — in the case of the shake, it’s a chocolate milkshake, while in the case of the hot chocolate, it’s “toasted marshmallow hot chocolate” — but, I mean, purple whipped cream goes a long way toward spooking something up, as far as I’m concerned. So, uh… consider me sold.

IHOP is no stranger to movie tie-in menus — particularly movie tie-in menus pegged to computer animated kids’ flicks. In recent years, the all-day breakfast chain has featured everything from the Minions to various Dr. Seuss characters like the Grinch and the Lorax. I do have to say, though, that the Addams Family menu appeals to me far more than, say, the Grinch menu did; then again, that’s probably because I have some really weird hobbies and am therefore endlessly amused by the idea of edible spider web-adorned pancakes.

Oh, and hey, the infamous IHOP Kids Eat Free promo will be coming back while the Addams Family menu is on offer, as well. At participating locations between 4 p.m. and 10 p.m. every day through Nov. 3, kids age 12 and under are eligible for a free entrée from the kids’ menu with the purchase of one adult entrée. So why not give your favorite Halloween-loving kid the gift of a stack of spooky pancakes this fall? After all, you get to enjoy the fun, too.

Now, if you’ll excuse me, I have some Web-Cakes to order…