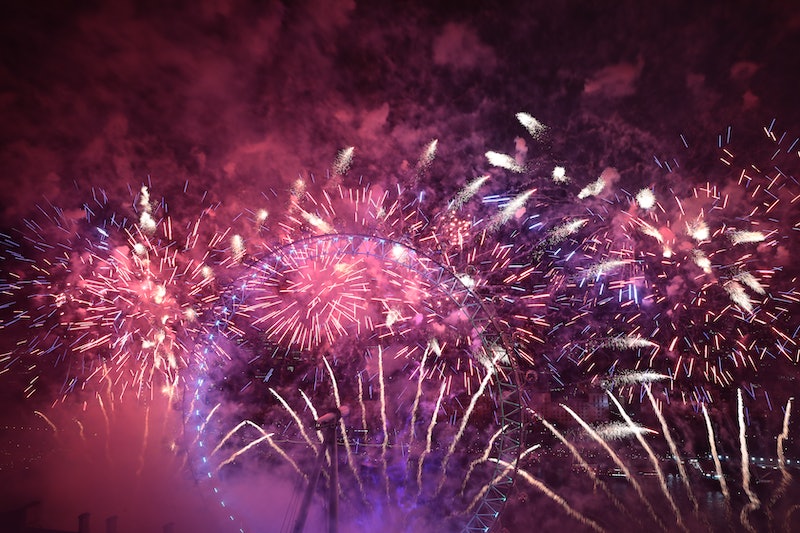 The biggest fireworks show of the year is nearly here — the 43rd Annual Macy’s 4th Of July Fireworks — and it's always the best way to end the summer holiday. While there are likely fireworks going off all over the country, one of the biggest displays is in the Big Apple. If you're not in New York City, where the fireworks are launched, or if you don't have a television, you might have to make alternate arrangements to watch the big show; but don't worry, because streaming the Macy's 4th Of July Fireworks is really quite simple.

The actual fireworks will begin about 9:20 p.m. ET According to NBC New York, the fireworks themselves will launch "from the Brooklyn Bridge and four barges along the lower East River." If you have a TV, tune into NBC about 8:00 p.m. ET for the big show before the show, which includes performances by Brad Paisley, Luke Bryan, Derek Hough, Ciara, Khalid, and Maren Morris, and a new version of "Somewhere Over The Rainbow" that Jennifer Hudson arranged just for this very moment in commemoration of The Wizard Of Oz's 80th anniversary.

The theme is an ode to American cinema, so that will fit somewhere in there, too.

No TV? NBC will have a livestream of the festivities on the NBC app and the station's website, but the caveat is that you still need a cable login in order to see the spectacular. Borrow one from a friend? If the music and hosts hobnobbing before the fireworks isn't exactly your thing, EarthCam.com will show the fireworks in their entirety — and nothing but. Simple and to the point! You can also see the fireworks using whatever you usually use to stream live television, so long as you can watch NBC on them.

If you're a local New York resident or if you'll be in town for the big day, you can see the fireworks in person. The best spot is probably a friend's rooftop, if we're being honest, where you can get above the fray and the crowds. According to Newsweek, the actual best spots for in-person viewing are on the elevated portions of the FDR Drive.

You can enter on Broad Street and Water Street; Pearl Street and Dover Street; Robert F. Wagner Sr. Place and St James Place; and Montgomery Street and Cherry Street, but get there early — it's going to be crowded.

Going in person has its pros and cons — the pro is that you're in the presence of an amazing national event, but the con is that it's busy and there are always a ton of people. Staying in and finishing off the barbecue leftovers and avoiding mosquitoes (because you know they're out there) is obviously the best way for any couch potato to spend the holiday. However you spend the day, tuning into the Macy's 4th Of July Fireworks is always a fun and festive experience for Independence Day. In fact, it's downright un-American to do anything else.

More like this
Here’s How 'House Of The Dragon' Diverges From The Book’s Timeline
By Allyson Johnson
Everything To Know About 'And Just Like That...' Season 2
By Jack Irvin
Does The 'Echoes' Ending Mean There Will Be A Season 2?
By Kadin Burnett
Kylie Jenner Was Almost Named After *Another* Iconic American Family
By Grace Wehniainen
Get Even More From Bustle — Sign Up For The Newsletter