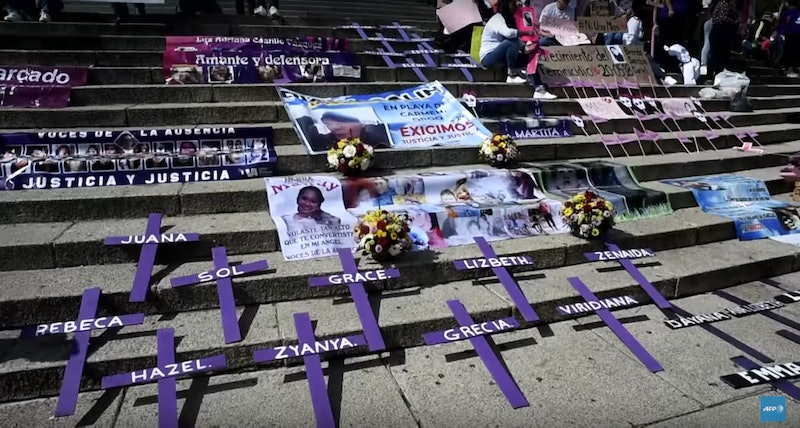 Beginning on Aug. 12, a movement has been growing in Mexico's capital — and the protesters' goal is gender equity and protection under the law. Revolución diamantina, also called the glitter revolution, is a women-driven protest against the staggering rates of violence against women in Mexico. And if you want to help push back against this violence, there are a few ways you can support Mexico's glitter revolution, even if you live far away.

The glitter revolution was borne out of the devastating fact that thousands of women in the country are murdered every year by someone they know, according to the Organization for World Peace; approximately 1,812 women were killed between January and July of this year, alone. And thousands more are victims of domestic abuse and violence. What's more, the organization notes that only 15 of 33 Mexican states mention femicide (also known as the killing of a woman or girl, for gender-related reasons) within their criminal codes. Therefore, many crimes go unpunished.

The protests are a response to this violence, which has persisted for years — but they're also inspired by a more specific incident that took place on Aug. 3. Per Slate, a 17-year-old girl was allegedly sexually assaulted in northern Mexico City by four police officers.

She tried to report the alleged rape the next day, the publication reports, but had to wait several hours for medical authorities and finally left with her family before the examination could be done. Days later, the girl reported the alleged rape again, but by then there was no physical evidence of it. According to Slate, the allegedly involved officers were put on a brief administrative leave; city Attorney General Ernestina Godoy then said, “Without a proper case file to make a clear claim [of rape], we will not be manufacturing culprits."

According to The Guardian, the movement was coined "revolución diamantina," or the "glitter revolution," after protesters tossed pink glitter at a Mexico City official on Aug. 12 during a demonstration in response to how the rape allegation was handled. One activist and graduate student, Sandra Aguilar-Gomez, spoke to the publication about the emotional momentum of the protests. She said, “I can tell you that the [demonstrations] won’t stop. I’m certain they won’t stop. They have had enough.”

Here's how you can help support the movement to end femicide in Mexico, even if you live thousands of miles away:

More like this
At 14, Tatiana Maslany Was Obsessing Over Tamagotchis & The Spice Girls
By Gabrielle Bondi
Scotland's First Period Dignity Officer Has Sparked Backlash
By Darshita Goyal
Beyoncé & Madonna’s “Break My Soul” Remix Honors A Group Of Black Icons
By Stephanie Topacio Long
Ben & Jerry’s & Tony’s Chocolonely Are Launching 4 Responsible New Flavours
By Sophie McEvoy
Get Even More From Bustle — Sign Up For The Newsletter