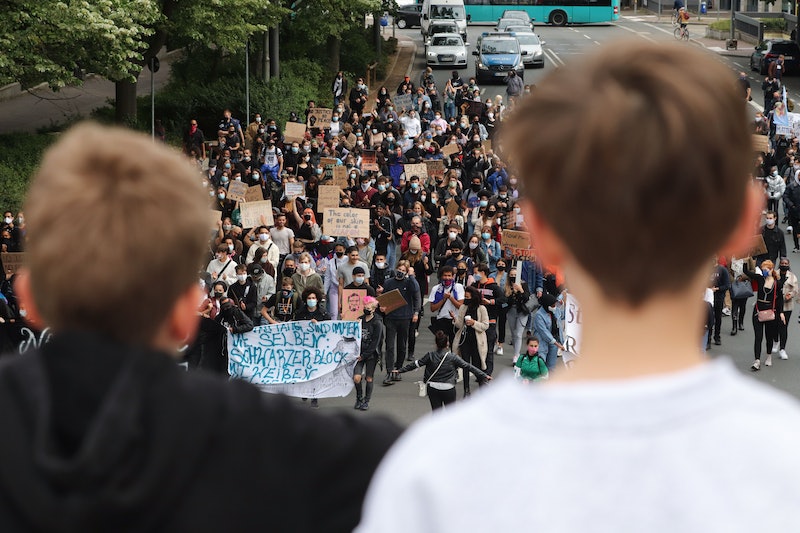 When former Minneapolis police officer Derek Chauvin kneeled on the neck of George Floyd for eight minutes and 46 seconds, it inspired an outcry that put America’s deep, traumatic, systemic issues with race and anti-blackness in stark relief. And, for many white and non-Black people of color, that stark relief has led to a reckoning. What have I done? And what can I do moving forward?

If you’re a white or a non-Black person of color and the national conversation has entered your home — and your workplace, social media feeds, and group chats — you might be wondering how to actually have these hard conversations. You might be scared of ruining relationships or saying the wrong thing or that you just don’t know enough about the topic yet. But that's OK, and you can work through it.

Jordan Pickell, MCP, RCC, a clinical counselor who focuses on the impacts of trauma, violence, and oppression, previously told Bustle that while actively working through our own feelings about these conversations is hard, it's really important.

“So much of anti-racist work starts with our close relationships but, even more, that it starts with ourselves," Pickell says. "We put a lot of pressure on ourselves to say all the things, so we say nothing. It's important to find ways to say something, even if it’s imperfect.”

She also recommends having a few go-to responses “in your back pocket” for when certain topics come up. For example, if someone you love says, “Yeah, but all lives matter!” you could say, “Absolutely! But Black lives are specifically at risk, so that’s what we’re focusing on and talking about when we say Black Lives Matter.”

Every conversation starts with someone who’s willing to speak up. And that someone can — and should — be white and non-Black people of color speaking with our peers. With that in mind, here are some more tips on how to talk to your partner, friends, and coworkers about the protests, race, and anti-blackness.

For some couples, this most recent Civil Rights movement has brought up some major ideological differences. Maybe you’ve just realized that your partner is super focused on the property damage from protests and isn’t able to see that it’s not the biggest issue right now. If that's the case, then it’s time to have a dialogue with your partner.

But that’s really scary. Pickell points out that our significant other is often the closest relationship we have; our “safe harbor” from a scary world. As a result, having really difficult conversations — and conversations about race and racism are important, heavy, and intense — can feel extremely threatening.

“In those relationships, it would be really important to have a way to work through conflict in a way that both people feel like they can engage, think clearly, and that they’re respectful of each other,” Pickell says. “Use those tools that you usually use when you’re working through conflict — whatever works for you as a couple.”

Now is the moment to pull out all of the tools that help you have constructive arguments. Maybe you need to yell, walk away, and then have a more level conversation later. Maybe you, like some friends of mine do, always hold hands when you’re having an argument. Maybe you need to pause and do some research on your own and send it your partner's way after because pulling up all the facts is really hard when you're emotional.

How To Talk To A Friend Who Thinks “All Lives Matter”

Pickell says that, in a similar vein to couple relationships, friend relationships are 100% voluntary. They’re also often treated as less permanent than family relationships. But they’re really important, deep relationships that people are rightfully scared of rupturing — and it’s that fear that keeps us from having the hard conversations.

Pickell points out that in this socio-cultural moment, people are “quick to end relationships — friendship in particular — when there’s a challenge.”

Rather than immediately cutting off a friend who drops “All Lives Matter” into the conversation when you start talking about the protests, Pickell suggests keeping the lines of communication open. Speak from your own experience. Ask questions about theirs. And go into it with the intent of keeping your relationship — and the conversation — going.

“Because if our goal is to upend systems of oppression, we can’t shift people’s perspectives if we aren’t in relationships with them and engaging them,” Pickell says.

If in the course of those conversations you realize that your friend just isn’t a caring person or your values are too far apart to meet in the middle, Pickell says, then it’s “completely fair to end the relationship.” [But give it a shot first.] cut

How To Talk To Your Coworker Who Makes Problematic Comments

How To Talk To Your Siblings About White Privilege

Siblings are family, but they're also often our friends and peers. So start by owning your own mistakes, the way you would with a friend. Say, "I totally get why you don't believe in white privilege. I didn't either, until..." Ask them about their own experiences, listen, and then connect their experiences with the point you're trying to make.

Then offer to direct them toward resources. Explicitly give them permission to talk it out with you, without judgment, as they start the learning process. This is one relationship where being open, communicative, and non-judgmental can go a really long way.

And if you're having trouble pulling up facts in the moment, don't be afraid to take a break and come back to it.

"One thing I'm working on: instead of getting frustrated that I'm doing a bad job making my point, or conveying information, is to pause and say, 'You know what, I'm articulating this badly. And I don't have information to back it up off the top of my head. Let me send you some articles about it.'" Lauren, 34, tells Bustle. "Because 'I know I've read about this repeatedly, I just can't cite specific examples, just believe me' is not necessarily the best tactic."

If you're scared to get started on these conversations, remember: This issue isn't abstract. Remember George Floyd, Breonna Taylor, Trayvon Martin, Michael Brown, and the thousands of other killings of Black people in this country. America still struggles with white supremacy, and Americans refuse to acknowledge white privilege. And then take a deep breath, turn to your loved one, and speak up. It's the only way forward.

More like this
8 Charities To Donate To During Black History Month
By Alexis Morillo
Why We Love Investigating Friendship Breakups
By Carolyn Steber
I Spent 2 Years Trying TikTok’s Dating Advice
By Kailynn Johnson
5 Signs You Have A Toxic Relationship With Yourself
By Lexi Inks
Get Even More From Bustle — Sign Up For The Newsletter
From hair trends to relationship advice, our daily newsletter has everything you need to sound like a person who’s on TikTok, even if you aren’t.