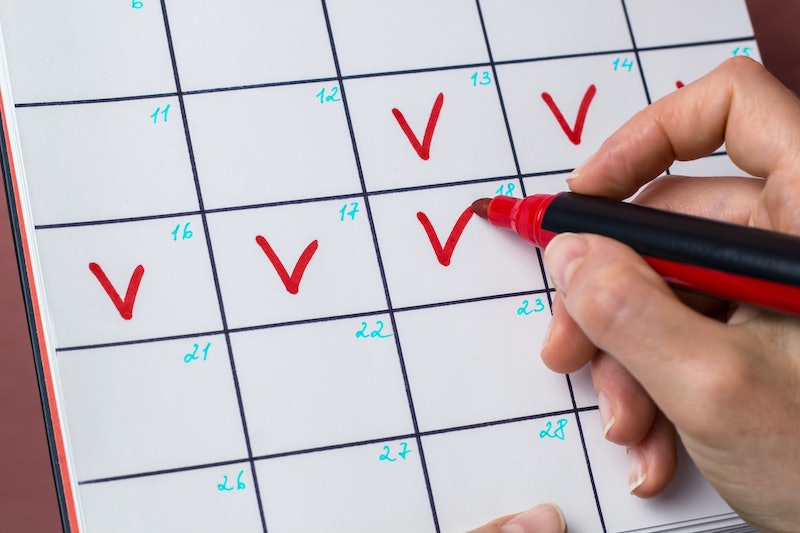 Recently, you may have noticed a couple of viral articles highlighting that the effectiveness of the morning after pill partially depends on whether you have already ovulated that month. Many, including myself, did not know this. (Shockingly, no one had ever told us.) Feminist anger aside, I was more concerned with how I could track my menstrual cycle when I don't have periods AKA the most obvious indicator of what's going on when. In fact, how could anyone who doesn't experience regular bleeds?

The reason I haven't had a period for a good couple of years is because I take a progestogen-only contraceptive pill (mini pill) every single day, 9 p.m. on the dot. From the get-go, it put an end to any period signs, including stomach cramps and bloating. Crucially though, it means I couldn't tell you where my cycle's at right now, even if you offered me a million pounds.

This pill isn't the only form of contraception that halts periods. People who decide to skip their combined pill break (which is perfectly fine to do) won't experience withdrawal bleeds each month. Other contraceptives, like the implant and the hormonal coil, can also alter period regularity, per the NHS.

This isn't a huge problem in the majority of cases. If you're using regular or long-lasting contraception, you're unlikely to care much about the fertility benefits of menstrual cycle tracking. And most hormonal contraceptives work to prevent ovulation, upending your natural cycle and reducing the need to closely follow the inner workings of your body.

But ovulation — which usually happens in the middle of your cycle, per Healthline — is not always suppressed (especially if you don't take your pill correctly). Around 40 percent of mini pill users will continue to ovulate, according to the American College of Obstetricians and Gynaecologists. However, its other effects — which include thickening cervical mucus — help to prevent pregnancy too.

"If used perfectly, both [pills] are 99 percent effective [against unwanted pregnancy], says Dr. Shree Datta, consultant obstetrician and gynaecologist at The Lister Hospital and MyHealthcare Clinic. But "typical use", she adds, usually means the combined pill is 91 percent effective and the mini pill 87 percent effective.

The potential problem comes when you forget to take your pill and go on to have sex. Depending on which pill you take, mini pills come with a three-hour or 12-hour window, per the NHS. That means you're not protected if you take it either three hours or 12 hours late. If you have sex in the period between missing your pill until two days after reliably taking said pill again, you may need emergency contraception.

("Women should avoid unprotected sex for seven days after a missed [combined contraceptive] pill or use alternatives such as condoms," notes Dr. Leila Frodsham, consultant gynaecologist and spokesperson for the Royal College of Obstetricians and Gynaecologists.)

Your first thought is likely to be the morning after pill. Thanks to journalists from Refinery29 and BBC Three, the fact that the morning after pill will not prevent pregnancy if you have already ovulated, and were fertile at the time of intercourse, is now drilled into my skull. But it's unknown to many others who may use it.

When I asked a friend if she knew of a way for a non-period-haver to track ovulation, she shook her head. We both concluded that it must be impossible; another female health minefield opening up before our very eyes.

It's hard enough to track with a period. As Dr. Datta tells me: "A regular period is generally a good indicator that you have released an egg at ovulation — if you’re looking to get pregnant, but this doesn’t necessarily tell you exactly when you’ve ovulated.

"Remember this is influenced by several factors including your lifestyle, age, and stress, so cannot always be accurately predicted simply by using your diary. Indicators around ovulation time include an increase in basal body temperature and breast changes such as swelling or tenderness." But, she adds, even these "are non-specific and can be influenced by external factors."

For those who aren't having periods or experiencing irregular ones, "it's very difficult to track ovulation," Dr. Datta says. And for those on hormonal contraception, there is no reliable way to track your menstrual cycle.

"The very role of hormonal contraception is to alter your hormones," she notes, adding: "There is little evidence to confirm other reliable signs to know where you are in your cycle when taking these medications. Of course if you have a regular menstrual cycle at the time of starting hormonal medication, that’s a possible indicator, but over time that becomes less reliable.” According to Dr. Datta, the only reliable ovulation-testing method is a blood test.

If there's a chance you could have ovulated but you don't have a clue when, be wary of using the morning after pill. (Even certain medications and your weight can impact its efficacy, reports BBC Three.) While sexual health clinics usually provide detailed information, busy pharmacies may not. And information within the pill's leaflet, if included at all, can easily be missed or misconstrued.

An emergency IUD is the most effective emergency contraception option, states sexual health charity Brook. A caveat here too: it needs to be fitted within five days of unprotected sex or up to five days after the earliest time you could have ovulated. But it can even replace your regular contraception or, if preferred, be removed by a trained professional.

"Overall, the IUD is more effective than the emergency pill at preventing pregnancy after unprotected sex, as it works by creating a toxic environment for sperm and so is less reliant on the timing in your cycle," notes Dr. Datta. Plus, it "should still work even if you have ovulated."

"If you are looking for additional contraceptive support while on a contraceptive pill, I would recommend the use of a condom which will also protect you from most STIs and STDs," finishes Dr. Datta. "You may also want to consider discussing your contraceptive options with a gynaecologist such as an IUD, contraceptive injection, or implant to find out which option is best for you."

I suppose the motto of all this is: To give informed consent, women need to be informed. Not with cherrypicked information, but with all the information relevant to them. Because when a person takes a pill reliably, the last thing they expect it to do is fail.

More like this
The Case For Following A Menstrual Cycle Workout Plan
By Emma McGowan and Carolyn Steber
Pret & Costa’s Coffee Is The Strongest On The High Street, According To Which?
By Sam Ramsden
Here’s What TikTok's "Mascara” Trend Is *Really* About
By El Hunt
Ben & Jerry’s New Sundae Flavours Are A Chocoholic’s Dream
By Sophie McEvoy
Get The Very Best Of Bustle/UK
Sign up for Bustle UK's twice-weekly newsletter, featuring the latest must-watch TV, moving personal stories, and expert advice on the hottest viral buys.