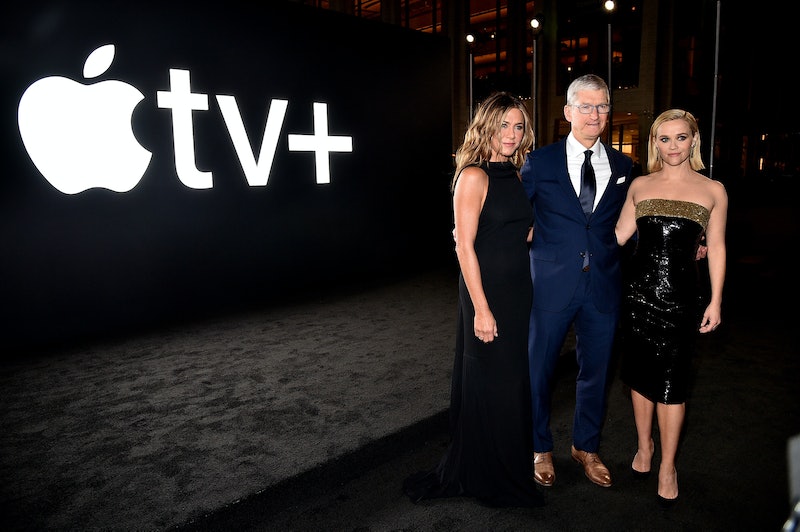 On Nov. 1, Apple TV+ officially launched, offering a handful of original series helmed by high-profile celebrities like Jennifer Aniston, Steven Spielberg, and more. But it's not enough just to own an Apple device, if you want to access all of this new content. In order to use Apple TV+ and watch its new series, you're going to have to do a tiny bit of work — but it will likely take a minute or less.

According to Apple, how you activate and watch Apple TV+ depends on the device you're using. If you're using it on an iPhone, iPad, or iPod Touch, then all you have to do is download the Apple TV app. If you're watching it on a computer, then you can go to TV.Apple.com using an internet browser. And if you're watching it on a television, then you can watch it through an Apple TV streaming box, the Amazon Fire TV, a Roku streaming player, or a select handful of Samsung TVs with the Apple TV app.

As USA Today reported, Apple TV+ will be available on other smart TVs in the near future, including Sony, LG, and Visio. But it's not just about having the right app or website link: you're also going to have to create a subscription account.

The good news is that the subscription costs of Apple TV+ are really low: it'll run you $4.99 monthly, unless you take advantage of one of Apple's signup deals, in which case it'll be totally free for a year. Per Apple, you might be eligible for a free year of Apple TV+ if you recently purchased a device with that offer; many Apple products including iPhones, iPads, and Mac laptops offer that promotion if you bought them after Sept. 19. Even better, up to six family members can use the same Apple TV+ subscription, and those family members can stream Apple TV+ from six different devices simultaneously, if they want.

There's also a great deal available for students: if you're using a student subscription plan for Apple Music, then you'll get Apple TV+ at no additional cost. That means you'll have access to the whole Apple Music catalog as well as the entire Apple TV+ catalog at the rate of $5 a month.

Once you have an Apple TV+ subscription, you'll have the option of watching all of the original series, movies, documentaries and more that are available on the streaming network, commercial-free. You'll also have the option of downloading the shows to watch offline, too, so you won't have to worry about connecting to wifi to get your fix.

Apple has already announced many of the shows, documentaries, and movies that are available to stream immediately. They include the full first season of Dickinson, a television series starring Hailee Steinfeld about the life of Emily Dickinson; the first three episodes of The Morning Show, a drama series starring Aniston and Reese Witherspoon; a new series starring Oprah Winfrey in which she speaks with authors for her famous book club; and more. Now, all you have to decide is which device you'll be streaming Apple TV+ through.