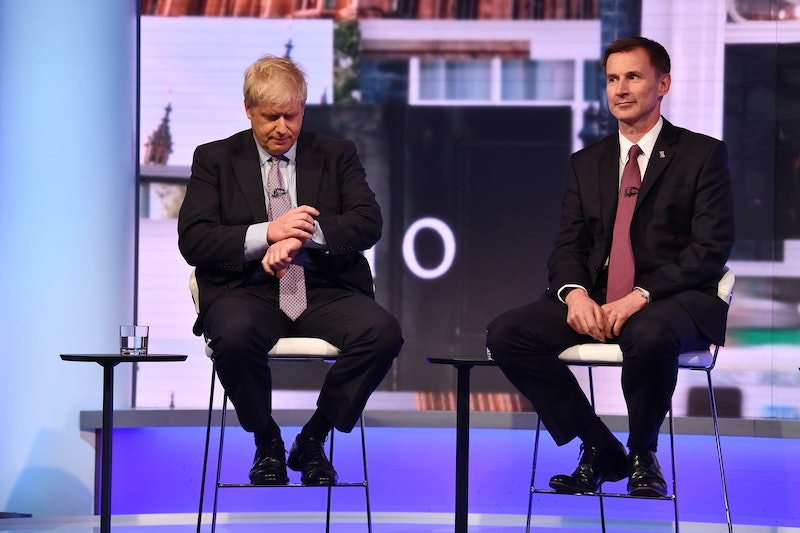 The Conservative leadership race has finally reached its last stage. Now, only two candidates remain: Boris Johnson and Jeremy Hunt. But deciding who will come out on top isn't a right afforded to every UK citizen. If you're a little confused by proceedings (and let's be honest, British politics hasn't been easy to understand as of late), here's how to vote for the next Prime Minister.

First things first, you never actually vote for the prime minister per se. During a general election, votes are cast for your local politician. Whichever party ends up with the most seats in the House of Commons usually forms the government, and the leader of that party becomes the new prime minister.

But the rules are a little different when the existing prime minister resigns. When that happens, the prime minister's party begins the search for a new leader. Whoever wins the most votes in the leadership contest then automatically becomes prime minister (as long as the Queen approves).

Although there is a final leadership vote, not all UK citizens are eligible to have their say. Only official members of the party in question can vote. So in the current case, only Conservative party members will receive a postal ballot.

If your next thought was to immediately sign up as a Conservative member, there's a catch. Not only do you have to pay (£25 a year for standard, £5 for people under 23, and £15 for former or current armed forces), but you also have to have been a member for a minimum of three months to cast your vote.

Unfortunately, that means any non-members won't be able to choose either Johnson or Hunt in the upcoming leadership vote. The two are preparing to embark on a "hustings" tour, visiting numerous locations across the UK to give their views to party members. The first event will take place in Birmingham on Saturday, July 22, with the final date scheduled for Wednesday, July 17 in London. (Northern Ireland is yet to be confirmed, but all other dates can be found here. Members can also sign up to attend their local meeting here.)

Not even the 160,000 Conservative party members got the chance to choose Johnson or Hunt as their final candidates. That was left to current MPs. But in the final vote, which is believed to start on July 6 and end on July 21, all party members will receive a postal ballot. Whoever receives more than 50% of the vote will be declared party leader in the week beginning July 22, reports the Telegraph.

Theresa May will then visit the Queen at Buckingham Palace to officially resign as prime minister, reports Metro, before recommending the new Conservative leader as her replacement. If the Queen agrees, that individual will take on May's role.

The next general election isn't scheduled until 2020, but that doesn't mean an earlier one couldn't be held. There are two ways to trigger this: a motion of no confidence passed in the government by a simple majority followed by 14 days without a confidence motion in a new government being passed, or a general election motion that is agreed by two-thirds of the total number of seats in the House of Commons.

As the Guardian reports, Labour leader Jeremy Corbyn urged for an immediate general election to be called following May's resignation. "The prime minister is right to have resigned. She has now accepted what the country has known for months: she cannot govern, and nor can her divided and disintegrating party," he said in a statement. "The last thing the country needs is weeks of more Conservative infighting followed by yet another unelected prime minister. Whoever becomes the new Conservative leader must let the people decide our country’s future through an immediate general election."

Johnson is both the favourite for MPs and party members, according to a recent survey by the ConservativeHome website, with almost 62% of respondents saying he was their preferred choice. Only 11% opted for Hunt.

The UK will have to wait a further month to see who really will reign supreme.