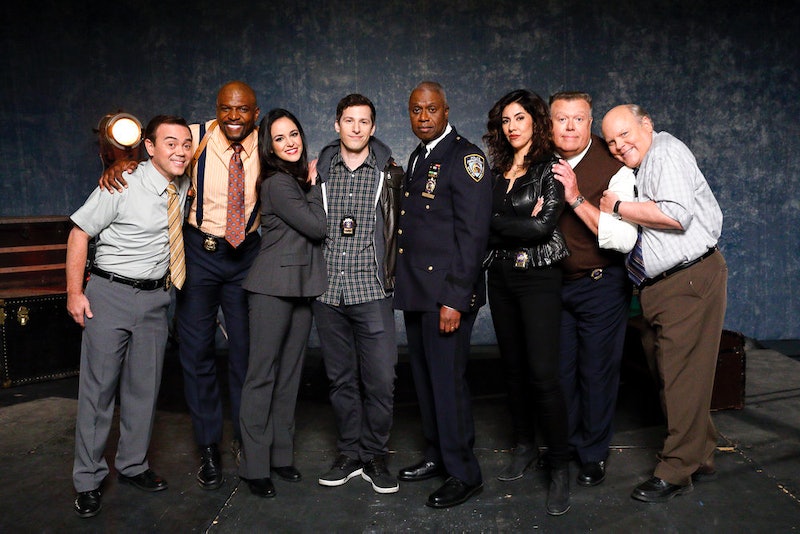 Brooklyn Nine-Nine is basically the Golden Retriever of TV comedies. It's goofy and loving, and it's totally reliable — always there to cheer you up at the end of a long day. Ever since it landed on Netflix UK a few years ago, the cop comedy has accrued a growing UK fanbase, hitting the funny bone of plenty of Brits. Now that it's back on US screens again for a sixth season, you're probably wondering how to watch Brooklyn Nine-Nine season six in the UK. Jake Peralta's calling, and it's time to goof out again.

In the US, Brooklyn Nine-Nine finds its home on NBC, but here in the UK, you've been able to rely on E4 to roll out the seasons, and fortunately, that's not changed for number six. The show premiered on E4 on March 28, with Digital Spy announcing the news shortly before on March 13. So if you've yet to cop on to the new season (sorry), then you're not to be blamed. This one's come around pretty speedily.

As of writing, E4's just aired the fifth episode, so if you want to catch up before the next one airs, then you'll have to be quick, as episode six lands on Thursday, May 2 at 9 p.m., according to the All4 site.

If that's too much of a rush for you, then you have the episodes at your disposal for a month after each episode airs on All4. Or there's Netflix. However, if this is your preferred way of diving into the precinct's shenanigans, then you might have to wait a while. What's On Netflix predicts that season six probably won't arrive on Netflix UK until at least Spring 2020.

That timing would follow suit with the previous seasons' rollouts. As What's On Netflix writes, since season five came to E4 on March 8, and didn't appear on Netflix until a year later on March 9, you can probably expect a similar pattern this time around. I've checked in with a Netflix rep to see if they can give anything away, and I'll let you know if and when I hear back.

So, the future's looking bright for Brooklyn Nine-Nine, which comes as a relief, especially when it seemed so uncertain not so long ago. When Metro revealed that Fox had axed the show on May 10, 2018, this sixth season was looking unlikely. That was until the show's diehard fans had a total meltdown about it. They raged the house down, which influenced NBC's decision to renew the show, as Variety reports. “It’s been one of our great joys as a network to give Brooklyn Nine-Nine a second life,” Lisa Katz and Tracey Pakosta, the co-presidents of scripted programming at NBC Entertainment, told Variety in Feb. 2019.

The network hasn't left any room for worry, as it already assured fans of a season seven, as Digital Spy reported at the beginning of the year. And with fans being as fanatic as they are Brooklyn Nine-Nine, I'm guessing there'll be plenty more where that came from.