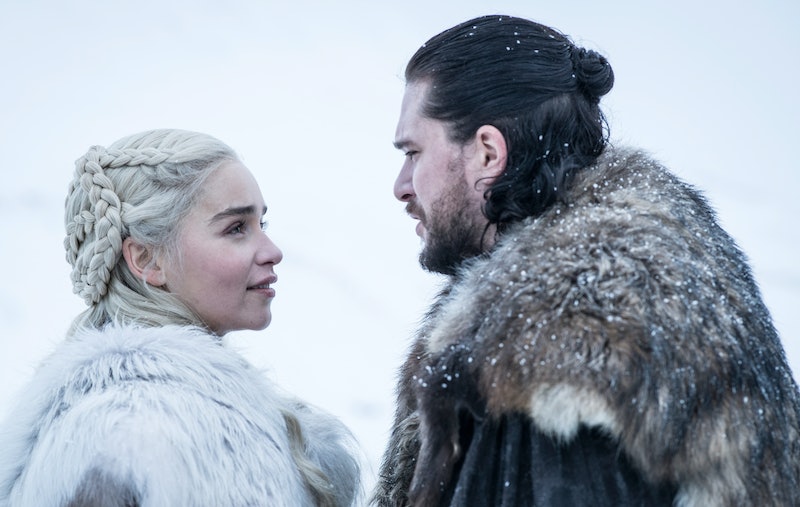 The clocks may have sprung forward over the weekend, but winter is still coming thanks to the upcoming premiere of the eighth — and final — series of Game of Thrones. Set to be the television event of the decade, you'll definitely want to clear whatever plans you have this month because this is one experience you do not want to miss. Get those viewing parties ready, because here's how to watch Game of Thrones in the UK.

According to the Telegraph, the final season of Game of Thrones will start on Monday April 15 at 9 p.m. on Sky Atlantic (Sky channel 108), a day after the season premieres in the U.S. However, if you don't want to cut yourself off from all forms of communication on Monday in an effort to avoid spoilers from our pals across the pond, Sky Atlantic is actually simulcasting the first episode when it airs in the States on Sunday April 14. And, according to the Express, they'll be doing this for all the subsequent episodes too. So get ready for a few weeks of late Sunday nights!

It just means that you'll have to stay up until at least 3 a.m. on a Sunday night to watch it. But in my opinion, a late night sounds a hell of lot better than spending an entire day panicking over spoilers, TBH.

The excitement is more than palpable for the final season of GoT, but if you're not as caught up as you'd like to be, there is still time to catch up with the past seven seasons before the eighth airs (just). NOW TV has all the previous seasons available to watch, so if you have the attention span of a saint and are able to plough through 67 episodes in the next two weeks — go wild. (Or, if you're brave enough to watch all seven seasons without taking ANY breaks, it would only take you two days and seven hours, according to culture site Fortune. Your pick.)

GoT fans have been waiting a long time for news of what the eighth and final season will hit their screens, and HBO has really been keeping them on their toes.

Fast forward to Nov. 2018, the GoT team let fans know that the final season would be airing in April 2019 in tweet that had a teaser trailer accompanied by the caption: "Every battle. Every betrayal. Every risk. Every fight. Every sacrifice. Every death. All #ForTheThrone."

Then, in Jan. 2019, GoT fans were finally put out of their misery, with an exact premiere date being revealed. Phewf!

According to Variety, GoT season seven was the show’s highest-rated yet, breaking all sorts of records in telly land. Speaking about the specific numbers, Variety wrote: "The season finale was watched by 16.5 million viewers, including people who watched the episode as it aired and night-of streams. Of those, 12.1 million watched the episode as it aired, making it the most-watched episode in series history." My guess is season eight will prove just as popular.

The eighth season of Game of Thrones premieres on Monday, April 15 on Sky Atlantic at 9 p.m.