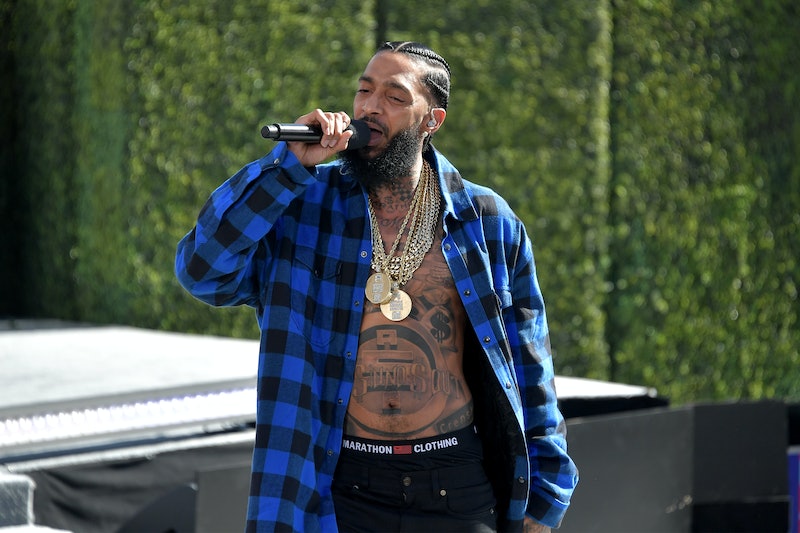 More than a week after rapper and community activist Nipsey Hussle died at age 33, the world is saying goodbye. For those who can't be in Los Angeles to honor the late rapper on April 11, though, there are ways to watch Nipsey Hussle's memorial service, a celebration of not only him but the causes he championed in his too short life.

On Thursday, Hussle's "Celebration of Life" memorial service will take place at the Staples Center in downtown L.A. from 10 am to noon PT. It's only the second time the iconic venue has been used as a memorial space for an entertainer (the first was Michael Jackson in 2009). The service will be followed by a funeral procession through South Central Los Angeles, past Hussle's The Marathon clothing store and ending at a funeral home in the Crenshaw district, according to USA Today.

According to Deadline, the service will be broadcast on local L.A. stations Fox 11, NBC 4, ABC 7 and KTLA, as well as KTLA's website and Facebook page. Fan will also be able to watch Hussle's memorial service on BET. On Twitter, the network announced they will livestream the event on BET.com and BET's Facebook page at 1 pm ET/10 am PT. Those looking to pay tribute will also be able to stream it via TIDAL.

"We are honored to bring the Celebration of the Life & Legacy of Nipsey Hussle to fans across the globe via livestream," TIDAL tweeted on April 10. The service will be available for TIDAL members and non-members alike.

On March 31, Hussle (né Ermias Asghedom) was fatally shot outside his Marathon Clothing store in South Los Angeles. Police later arrested Hussle's suspected murderer, Eric Holder, who has pleaded not guilty to the attack, which left two other men injured.

Throughout his life, Hussle represented his community through philanthropy efforts and business ventures, which included Marathon Clothing and Vector 90, a STEM center for families and children's organizations to help them get interested in science and math. He also owned Steve’s Barbershop, a cell phone shop, several restaurants, Marathon Studios and his own record label, All Money In Records, according to ABC News.

Hussle worked to end gang violence, having been involved with the Rollin' 60s, a Crips gang in Los Angeles, in his youth. It's something he spoke about in his music, including his 2018 album Victory Lap. It was was reported that before his death, Hussle was scheduled to meet with the police to discuss how to keep kids from joining gangs.

Hussle, who's survived by his two children and partner Lauren London, was so important to his community that days after the rapper's death, Los Angeles City Councilman Marqueece Harris-Dawson tweeted that he will "submit a motion" to the city council to rename Crenshaw Boulevard and West Slauson Avenue, near where Hussle was killed, “Nipsey Hussle Square.”

His work in the neighborhood is now also a part of the congressional record thanks to Democratic Rep. Karen Bass, who represents Hussle's neighborhood. According to ABC News, Bass took the floor of the House and spoke of what Hussle meant to his community.

"Nipsey Hussle will be remembered as a visionary, as a protector, as an inspiration, as a philanthropist, as a father, as a brother and as an unabashed son of South Los Angeles," she said. "For all he was given, he gave back. And for that legacy, South Los Angeles has been changed forever."

That's also how Hussle's friends and family want his legacy to be. "I would like for him to be remembered as a humble, spirited, respectful man," Hussle's mother Angelique Smith told the Los Angeles Times, "who had, since his childhood, had an extraordinary and unlimited intellectual capacity."

While Nipsey Hussle may be gone, his friends and family hope he and the causes that meant so much to him won't be forgotten.

More like this
What Song Does Eddie Play in 'Stranger Things'? Metallica’s “Master Of Puppets” Ignites The Season 4 Finale
By Alyssa Lapid
Fans Think Beyoncé’s “Break My Soul” Is Calling For A New Great Resignation
By Sam Ramsden
Tamra Judge & Vicki Gunvalson Gave A Hopeful “Tres Amigas” Update
By Brad Witter
Everything You Need To Know About The 'Knives Out' Sequel
By Grace Wehniainen
Get Even More From Bustle — Sign Up For The Newsletter