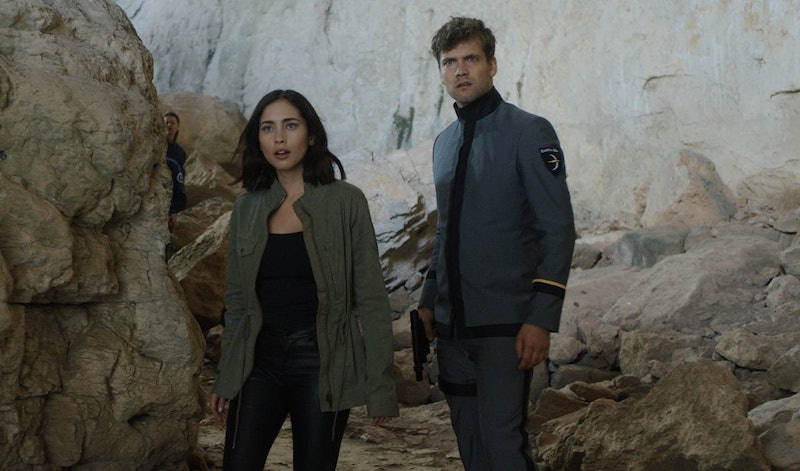 The post-apocalyptic sci-fi series Pandora follows the story of a woman who embarks on a new life at Earth’s Space Training Academy, where she acquires the skills to defend the galaxy from both human and extraterrestrial threats. The new series currently airs on the CW Network over in the U.S., and if this exciting new series tickles your fancy, you might be wondering how to watch Pandora in the UK. Well, I've done some digging on your behalf, and here's everything you need to know.

As it stands, an official UK airdate is yet to be announced, however according to the Express, the new series will likely be made available on Netflix worldwide at a later date — which has previously been the case with other shows to emerge from the CW Network. So, those of us in the UK might be able to watch this brilliant new series quite soon indeed, however just to be sure, I have reached out to Netflix for further comment and will update with any new information once it becomes available.

According to Deadline, Pandora is set in the year 2199 and tells the story of Jax, a young woman who lost everything following the death of her parents. Jax later discovers a whole new life at Earth’s Space Training Academy, a place where she finds new friends and is taught to defend the galaxy from both alien and human threats. However, secrets about her own identity begin to emerge, and whilst uncovering the truth, she must decide whether to be a saviour or destroyer of humanity. Jax's character is described as smart, inquisitive, empowered, and quick-witted — and although traumatised by the death of her parents, her world will once again be turned upside down after discovering that her entire life has been a lie.

The series is produced by U.S. TV veterans Mark A Altman, Steve Kriozere, Thomas P Vitale, Chris Phillip, and Karine Martin — and according to Deadline, when discussing the challenging casting process of Pandora, executive producer Altman revealed, "The biggest challenge of casting a new drama is to create an exciting, diverse family of actors. And I cannot imagine a more dynamic or talented group of actors than the cast of Pandora. I can’t wait for audiences around the world to meet this incredible ensemble this summer."

So, Pandora might not yet be available to watch in the UK, however, if previous CW shows give us any indication, we could soon be treated to a Netflix release of this thrilling sci-fi action series. Finger crossed.

More like this
Everything To Know About The 'Daisy Jones & The Six' TV Series
By Maxine Harrison and Brad Witter
The Song At The End Of 'The Last Of Us' Ep 1 Has A Deeper Meaning
By Sophie McEvoy
'The Last Of Us' Has Officially Been Renewed For Season 2
By Darshita Goyal
'Boiling Point's TV Sequel Is Set To Deliver A “Rollercoaster Of Emotions”
By Catharina Cheung and Sophie McEvoy
Get The Very Best Of Bustle/UK
Sign up for Bustle UK's twice-weekly newsletter, featuring the latest must-watch TV, moving personal stories, and expert advice on the hottest viral buys.