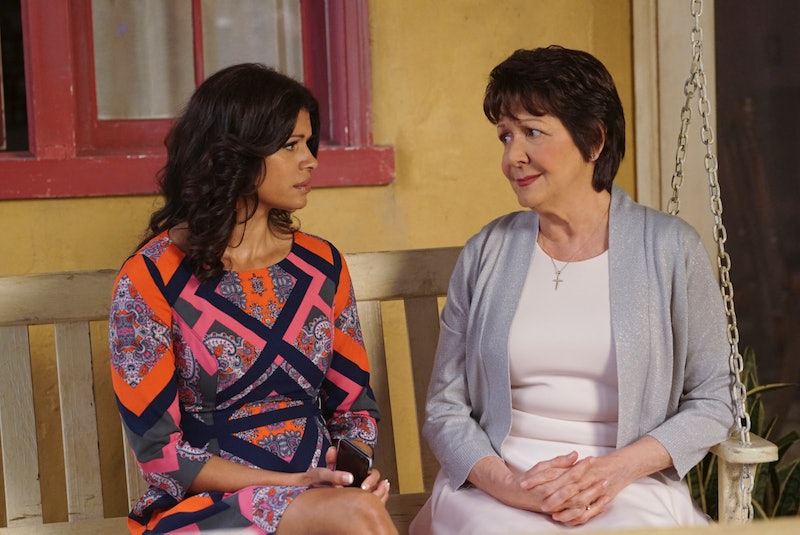 Spoilers ahead for Jane The Virgin. With the knowledge that more people are going to die in Jane the Virgin, it's anyone's guess as to who's about to kick the bucket in the coming episodes. And while Season 5 has been drama-filled (Michael's return from the dead! Alba and Jorge! Mateo's ADHD! Petra and JR's breakup! This Is Mars!), there haven't been any notable deaths so far. As a result, fans should be on their toes for the remainder of the series. And while it's unclear who will die in Jane the Virgin Season 5, fans can speculate about who it will be.

In its five seasons, the Jane the Virgin death count has been impressive, with characters like Roman Zazo; Rafael and Luisa's father, Emilio Solano; Michael Cordero (supposedly); Petra's sister, Anežka; her one true love, Scott Archuletta; Rafael's adopted mother, Elena Di Nola — the list goes on and on. And the Jane writers room isn't done offing people just yet.

"There are deaths," Jane the Virgin showrunner Jennie Snyder Urman told TVLine back in March, referring to the show's final season. "It's a telenovela. People are going to have to die." So while these undisclosed deaths are inevitable, that doesn't make the news any easier to stomach. And since there are only seven episodes left in Season 5, including this week's installment, it's only a matter of time before a character (or two, or three) bites the dust. Here are some of our best predictions as to who Snyder Urman may be referring to.

Although Xo's breast cancer is currently in remission, it could certainly return again. It would be a heartbreaking storyline but one that's entirely plausible.

Speaking of cancer, Rafael's could return before Jane the Virgin is over. While that would be devastating news for #TeamRafael, it would make some amount of sense to kill off Jane's other love interest (we did think Michael was dead for quite some time, after all) in order to even the playing field, so to speak.

It would be so satisfying to finally see this villain taken down for good. As several fans predicted, Sin Rostro and Michael's fates may be intertwined. If that's the case, they may go down killing each other (sorry, #TeamMichael).

Rafael's sister is always getting into trouble, and now that Luisa is helping Rose again, it's anyone's guess as to what her future holds. While Sin Rostro would never hurt her on-again, off-again girlfriend (that we know of), Luisa could still get caught in the crossfire somehow.

I would throw my remote out the window if Jane's abuela died, but it's certainly possible — especially if there's a large time jump.

Could Jane's ex-husband die for real this time? While Rose is still in prison, she has her henchmen keeping tabs on everyone in Luisa's orbit. And while Sin Rostro claimed that she wasn't targeting Michael anymore, that doesn't mean that he won't go after her. As Reddit user hannahmiyeko predicted, Michael will die killing Rose, which would be a bittersweet ending. But let's hope that fans don't have to watch Michael die twice.

Is River Fields really over her co-star, like she claimed in "Chapter 93," or is she still hell-bent on vengeance? If she's still upset with Rogelio for rejecting her advances, Jane's dad should watch his back.

It would be heartbreaking — but poignant — for our beloved protagonist to die before the series end. While it's unclear how it would happen, there could be a time jump in the series finale, which would allow audiences to see the Villanueva at the end of her life. After all, it seems pretty obvious by now that Mateo is the narrator, so perhaps the whole series is a posthumous tribute to his beloved mother.

So while this death news is doubtless troubling for Jane the Virgin fans, they should take some comfort in knowing that they don't have to wait on pins and needles too much longer. The series is set to conclude on July 31, per IMDb, which means that Jane the Virgin will tie up its loose ends before too long — in a manner that's sure to be equal parts dramatic, heartfelt, and shocking. It is a telenovela, after all.