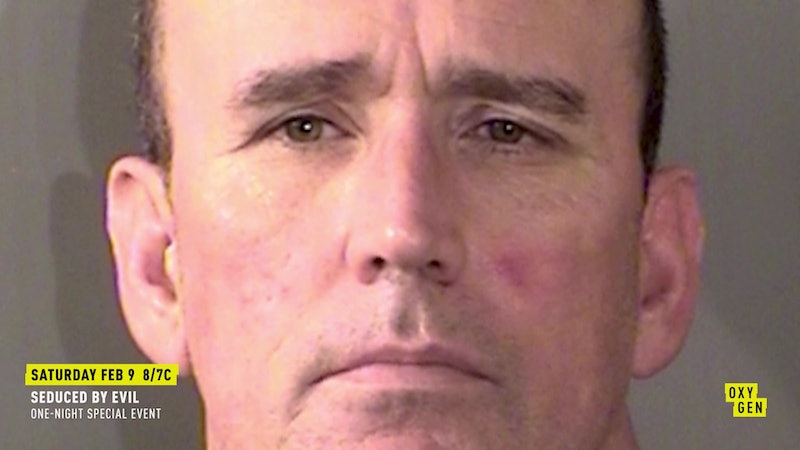 True-crime fans, gird your loins, because just when you thought you had heard it all, another story about a truly messed up situation comes veering round the corner and onto our TV screens. Can I get a hell yes from the morbidly fascinated? Looks like U.S. network Oxygen have done it again with their latest creepy AF documentary. But how can you watch Seduced By Evil in the UK?

Seduced By Evil follows the story of conman Derek Alldred, who managed to maintain multiple relationships with numerous women he met via online dating sites, eventually convincing them to part with their money and belongings. This stone-cold a-hole would literally drain these women of everything they owned (including credit cards, retirement savings, and social security numbers, according to the Star Tribune) and then move and change his name before picking up another innocent victim. Along the way, Alldred posed as a navy pilot, a professor, an attorney, a doctor, and a firefighter, among other personas, in an effort to seduce these women, the Daily Mail reports. In August 2018, Alldred was sentenced to 24 years in federal prison for fraud and identity fraud.

I am sad to say that, unfortunately, Oxygen isn't available to UK viewers (tears), but the Alldred case is one you have to learn about, so cross your fingers that it comes across the pond sometime soon.

Alldred's behaviour has been compared to that of John Meehan, the titular bad guy in Dirty John.

Dirt John, which was made by the L.A. Times, was a massive hit and, y'all, if you haven't listened to it, it's about time you get to it because OMG it's great. I will warn you that there are some spoilers ahead.

So, Meehan is described in this podcast as this smooth, charismatic guy who successful business woman Debra Newell met on an online dating website. He seemed slick AF, kind, caring, nurturing, and everything she ever could have dreamt of. A doctor, a proud Christian, and family man — one hundy percent her type on paper. So she completely falls for him and even ends up marrying him. However, her family instantly dislike him and feel very uneasy about their mum dating this creep. Turns out their misgivings were completely correct and Newell finds herself being completely manipulated, turned against her own children, and alienated from all those close to her.

The podcast was such a hit that it even got made into a TV series. Dirty John is based on the OG podcast and stars Connie Britton as Newell and Eric Bana as Meehan. It aired back in November in the U.S., leaving British fans hungrily anticipating its arrival on UK shores. And, y'all, good old Netflix has your back on this one. It isn't out yet, but all you romance cynics will be absolutely delighted to hear that Dirty John is set to air on UK Netflix on flipping Valentines day. IKR? So effing LOL of them.

So, yeah, sadly it isn't time for Seduced By Evil yet but, y'all, worry not, the world is a dark place and there are plenty of other true-crime stories for you to fill up on in the meantime.