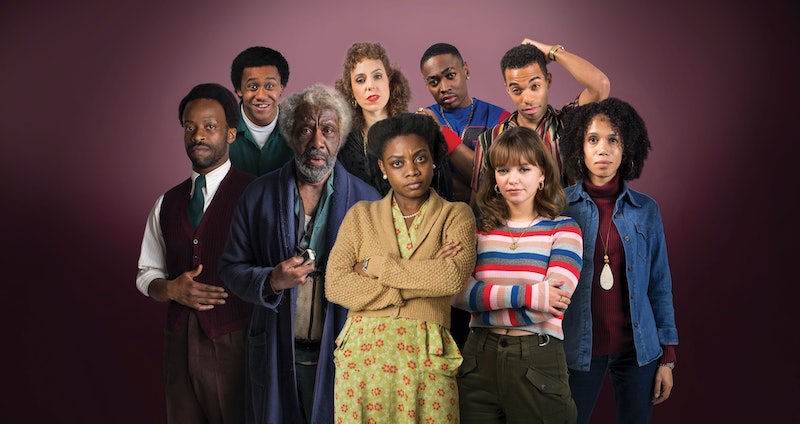 The BBC has announced a new eight-part series, Soon Gone: A Windrush Chronicle, that will tell the story of Afro-Caribbean community through a series of monologues. The series, which is set entirely in the front room of a British home, will celebrate diversity and cultural identity through the perspective of Afro-Caribbean stories, and will shed light on how the Windrush generation helped shape our society. But when does the series start? And what channel will it be on? Here's how to watch Soon Gone: A Windrush Chronicle.

The Windrush scandal was brought to the public's attention in April 2018 when the Guardian published an article, "The Children Of Windrush: 'I’m Here Legally, But They’re Asking Me To Prove I’m British.'" The article exposed the fact that many of those who arrived (or whose family members arrived) legally in Britain on the Empire Windrush ship to work in post-war Britain were facing deportation. Despite these people being British citizens under the 1971 Immigration Act, the Home Office did not keep a record of everyone who came, and many had not applied for passports so they were not naturalised citizens. The reason why this scandal was so deeply devastating was because many of the Afro-Caribbean immigrants who were facing deportation were elderly and had no family left in their mother countries, but were now being made to feel unwelcome in the country they had called home for 50 years or more. Former Home Secretary Amber Rudd has since said "sorry" for the appalling way in which members of the Windrush Generation were treated, but this apology has done little to fix the damage and trauma the scandal caused.

Soon Gone: A Windrush Chronicle will be broadcast on BBC Four in pairs of fifteen-minute episodes, according to the BBC. The show is the creation of Kwame Kwai-Armah, the artistic director at the Young Vic, and Lenny Henry's production company Douglas Road. Speaking to Digital Spy about the show, Henry said:

"We were talking about Windrush a lot in the Douglas Road offices, we thought it could be a good way of not just involving the deportee and detainee stories but another way of communicating stories about our culture for a broader audience."

For Kwei-Armah and Henry, the new series feels personal in many ways. The two have Caribbean roots and have spoken about their personal experiences, with Henry talking about how his mother was racially abused when she first moved the the UK, and Kwei-Armah telling the Times:

“It’s a thing that’s really close to my heart. With the scandal last year, this has been puncturing the consciousness, but I’m seeing the last remnants of that generation leave us in transition. We’re trying to find a way of honouring them, honouring their journey and their tenure.”

The first episode of the series airs on February 17, according to the BBC, and will begin with a monologue from the character of Eunice (played by Danielle Vitalis), who arrives in Britain on Empire Windrush in 1949. The role holds particular significance for Vitali, whose grandmother came to the UK as child. The actress told Elle UK:

"It wasn’t until I finished filming and I was telling my grandma about the monologue and, specifically, the part where my character talks about coming off the boat and being cold. She said: 'That happened to me! My mum had to put tights on me in a cubicle in a department store.'"

Digital Spy reports that, during the series, viewers will hear from eight family members, starting with Eunice in the 1940s and ending Eunice's great granddaughter Michaela in 2019.

The show is set to pay homage to the Britons who came here on Empire Windrush, and to explore the ways in which Caribbean and British culture has fused together. Even the title, Soon Gone, is a subtle, subversive play on the Jamaican patois phrase "mi soon come," meaning "I'll be there soon."

Soon Gone: A Windrush Chronicle will begin on February 17 at 10 p.m. on BBC Four.