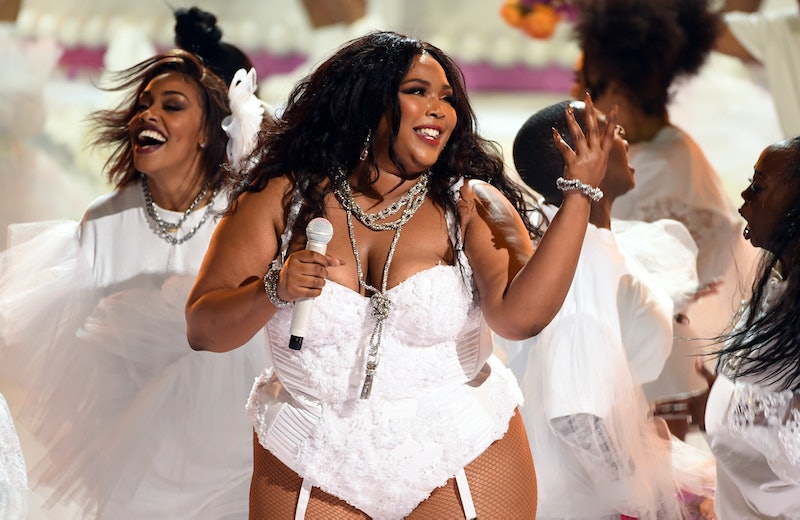 For most, awards season consists of the Oscars, Emmys, and Golden Globes — but there's so much more out there. The awards shows that happen in the latter half of the year may even be more fun. If you want to watch the 2019 VMAs red carpet to find out if you're more of a MTV type of award show person than a formal Oscars kind of watcher, the network has you covered.

This year, the MTV VMAs are being held in New Jersey, and the show itself will air live on multiple television networks including MTV (duh), MTV2, BET, VH1, CMT, Comedy Central, Logo TV, Paramount, and TV Land. If you've got access to any of those channels, you're in luck. While seeing the show itself is a must given the long list of performers and presenters as well as the nominees themselves, you also don't want to miss the VMAs red carpet.

According to E!, a live pre-show is set to begin airing at 7 p.m. ET, an hour before the official show will be going live. You can check out the red carpet pre-show on MTV, but if you don't have access to a television at the time, don't worry. The VMAs red carpet pre-show will also be live streaming on MTV Live. For those who don't have cable, Twitter is the place to be. The Hollywood Reporter reports that the red carpet will be streaming there as well.

While sure, the award ceremonies of the first half of the year are star-studded, the MTV VMAs are where celebrities come to let lose, hang out, and see some killer performances. This year, the list of talent that's heading to New Jersey for the show is next level. While the presenters are all great, all you really need to know is who's performing to make you want to tune into the show.

Lizzo, hot off the rise to smash-hit status of her song "Truth Hurts," is set to take the stage. Given her next-level rendition of the song at the BET Awards this year, you may not even be ready to see her at the VMAs.

A familiar face will also be making a return as a performer at the 2019 MTV VMAs. Taylor Swift's new album Lover debuted on Aug. 23, just in time for her to roll up at the show to perform. While the "You Need To Call Down" singer hasn't revealed what she's performing, according the People, she did let slip that she's not just performing but opening the show.

Then, there's Missy Elliott who may just be the most exciting part of the whole show. The music icon is receiving the annual Video Vanguard Award from MTV, and according to AV Club, she'll be performing at the VMAs for the first time in 16 years.

If you want to catch all the action, tune into the 2019 MTV VMAs red carpet at 7 p.m. ET on MTV, MTV Live, or Twitter. Then, make sure you stick around for the show itself at 8 p.m. ET you definitely don't want to miss these stars.