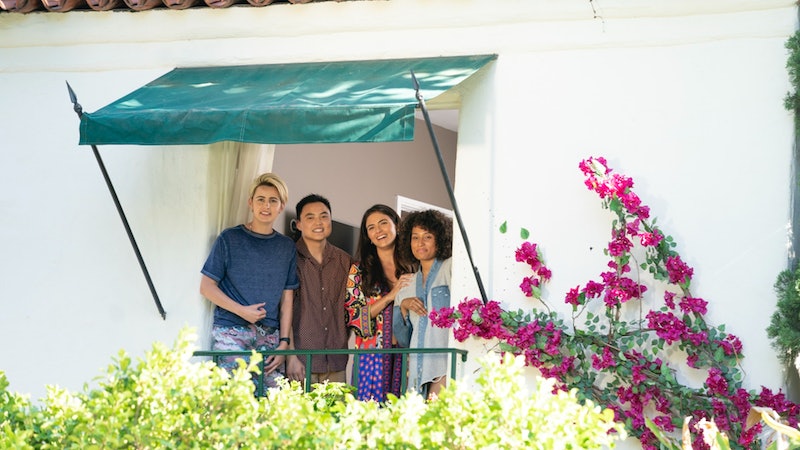 Set more than ten years after the show's original run, The L Word: Generation Q is poised to revive the groundbreaking U.S. series. The rebooted drama follows a group of female friends, the majority of whom are lesbians, and given the significant cultural impact of the series first time around, fans are surely wondering how to watch The L Word: Generation Q in the UK.

According to the Guardian, the new series recently made its debut over in the states, and is expected to arrive in the UK at a later date. So, with no official UK release date confirmed as of yet, I have reached out to Showtime for comment, and will update with any new information the minute it becomes available.

Moving away from the show's original West Hollywood setting, The L Word: Generation Q takes place within the Los Angeles suburb of Salt Lake. As the Gay Times reports, the series welcomes the return of Jennifer Beals as Bette, Katherine Moenig as Shane, and Leisha Hailey as Alice — all of whom lend their talents behind the scenes as executive producers. As well as returning faces, audiences can also look forward to several new additions to the drama's cast, including Arienne Mandi as public relations rep Dani Nùñez, Leo Sheng as social worker Micah Lee, and Jacqueline Toboni as Sarah Finley — a religious woman struggling to come to terms with her sexuality.

The groundbreaking LGBT drama originally premiered on Showtime back in 2004, and enjoyed a respectable 5-year run before wrapping-up in 2009. The series went on to inspire various spin-offs, including The Real L Word docuseries, and L Word Mississippi: Hate the Sin. However, Generation Q promises to be the most significant revival of the original show to date, and the eight-episode sequel will once again follow the drama's central women as they experience love, heartbreak, sex, setbacks, and success in Los Angeles.

Now, bringing back any show from the dead is often a risky business, however, it would appear longtime fans have nothing to fear, because The L Word: Generation Q has been met with significant critical praise following its highly-anticipated debut. The drama currently boasts an impressive 81 percent approval rating on the review-aggregation website, Rotten Tomatoes — with one positive synopsis from Rolling Stone praising the show's accurate reflection of the diverse LGBTQ community.

So, we might still be waiting on that UK release date, but judging by initial reactions from across the pond, it appears fans of the original L Word have a lot to be excited about.