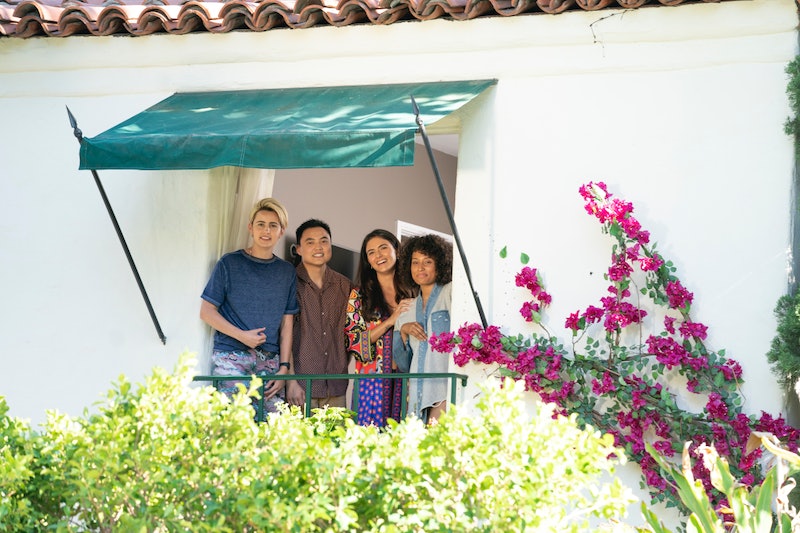 In the first 15 minutes of The L Word pilot, Shane (Katherine Moennig) breaks into her neighbor's pool to go skinny dipping. Fifteen years later, The L Word: Generation Q showrunner Marja-Lewis Ryan still can't stop thinking about it. Not because it's a sexy moment — though it very much is — but because it's the first time a then-teenage Ryan had seen queer women together onscreen just having fun. "Seeing large swaths of queer women onscreen together," Ryan tells Bustle, "there's something really delightful about that."

At its core, The L Word was a show that reveled in letting queer women know they're not alone. Now, Ryan wants Generation Q to help queer youth see there is a community out there for them, too. In Ryan's opinion, The L Word is an "aspirational queer narrative." You want to live where Bette and Tina live and dress how Alice dresses. But it's the friendships that Ryan, a born and raised New Yorker who moved to LA because of The L Word, found the most aspirational. "Not aspirational in an unachievable sense," she clarifies, "it's aspirational in that it's out there. You have to go to it."

The eight-episode revival picks up a decade after The L Word finale with OG favorites Shane (Moennig), Alice (Leisha Hailey), and Bette (Jennifer Beals) returning older, wiser, and definitely more woke. "To show them as having evolved within our community was really exciting to me," Ryan says, noting that The L Word ended six years before same-sex marriage was legalized in all 50 states.

Generation Q also introduces fans to a new batch of characters who are more fluid in how they define identity and sexuality, and who relate more to the Q word than the L one. For Arienne Mandi, who plays PR exec Dani Núñez, the term "queer" is "so wonderfully broad. It's like the idea that you can be whoever you want to be and love whoever you want," she tells Bustle. "It's like a new generation of people who are open-minded and just free."

For Rosanny Zayas, who plays Sophie, a television producer and Dani's partner, The L Word was the first time she saw a queer woman of color on television. "You watch shows like that and then your whole world opens up," she says. But while The L Word did so much for queer female representation, Zayas adds that "there are so many more people that should be seen and can be seen now." Generation Q is making sure of that.

Leo Sheng was 11 when he first saw Max, The L Word's first trans character, played by cis actor Daniela Sea. Like many other L Word fans, Sheng, who is trans, thinks the character was problematic. "It didn't set us forward in terms of positive representation," Sheng tells Bustle, but "Max was a product of a certain time." Sheng's character Micah, a professor of social work, gets to be a product of a different time, when a trans character can have a life that isn't solely focused on their transition.

"I think the fact that Micah being trans is not the crux of the storyline is a privilege," he says. "A big part of it is that he can move through the world as cisgender" — something he points out others in the trans community cannot always do. But Generation Q doesn't ignore Micah's transmasculine identity, either. "It's not [the writers] saying, 'We don’t care that you're trans,'" he says. "It's, 'We care and we value this piece of you and we want to show all the parts of Micah and of you that are relevant, not just you being trans.'"

With Generation Q, the hope is that everyone in the queer community will feel seen and appreciated for who they are. "For me," Sheng says, "queerness is about living your truth in a way that maybe doesn't align with heteronormative or cisnormative ideals. It's about unlearning those constructs and just being able to love and be who you are."

In many ways, that's still a radical concept in 2019, when all too often queer TV characters are still saddled with depicting the trials and tribulations that come with being queer, instead of being able to just live. Generation Q wants to make queerness feel less radical. "We don't have a straight girl coming into a queer space learning she belongs," Ryan says of her Jenny Schecter-less revival. "You're dropped into a super feminist, super gay world, without apologies or narrator or hetero perspective. That's what's different about 2019. Our audiences don't need to be guided anymore."

Having multiple queer characters allows for some "normalcy" in how they are depicted, says Jaqueline Toboni, who plays Finley, a queer woman struggling to reconcile her religious upbringing with her sexuality. Normal was always how Toboni, who was 14 when she got The L Word DVD box set, saw the show. Like Ryan, she found solace in these characters who seemed to be living the kind of lives she dreamed of. She's hoping Generation Q will have the same effect on teens who are still searching for their community.

"I just want to say to all the queer kids, there's a whole world of people out here waiting to love you," Toboni says. "All you have to do is find them." The L Word: Generation Q might be a good place to start.