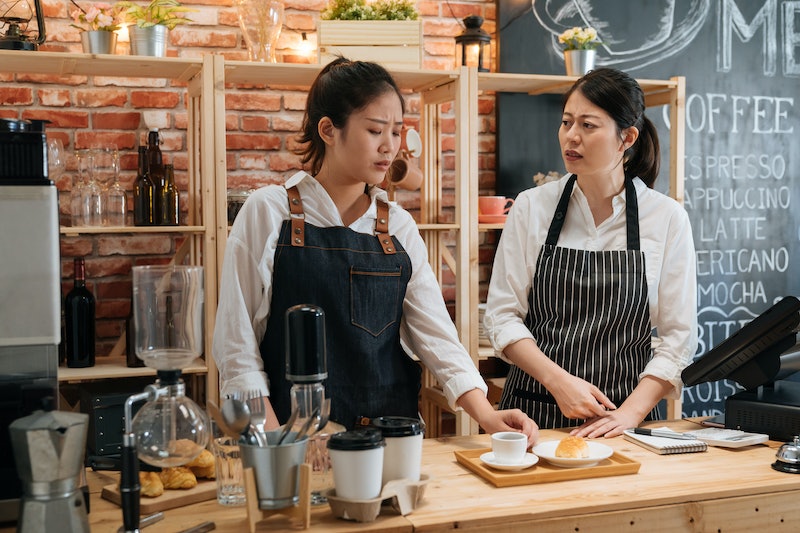 For better or worse, coworkers are often people you spend an enormous amount of time with, sometimes a lot more than your closest friends and family Now, if you happen to love everybody you work with, the heavens have smiled upon you. It can truly make all the difference. But on the other hand, if you have a bad apple in there, so to speak, or at least someone you don't mesh well with, it can sour the work-a-day world pretty quick. Knowing how to deal with a difficult coworker is basically an art, but there are definitely things to do when you and said colleague aren't getting along to change the situation.

First of all, do remember that if you have a lot of trouble with someone in particular at work, there is a chance, at least, that you aren't the only one feeling that way.

"Difficult coworkers often have a high turnover rate, so remember if you are in your job for the long haul, don't engage in any manner that is going to make your life difficult in the long run," counselor Lisa Choquette, owner of Vibrant Mind Therapeutics tells Bustle. "Intelligent and professional people learn about you through your actions. Continue to act with the respect you deserve and get back to enjoying your job."

Choquette says that overall, be as kind and polite as possible with your coworker, and even try to throw in some sincere compliments from time to time — as excruciating as that might seem. If it's just a matter of their bad attitude or work ethic, being as positive and non-reactive as possible is going to serve the situation.

"Difficult coworkers likely have insecurities which are fueling their behavior, so if you can try to ease their insecurities, you might ease their nasty behavior," Choquette says.

But more than anything, Choquette says, stay centered in what you are doing there. "Remember who you are and why you were chosen for your job. Your difficult co-worker may try to make you second guess yourself. Don't let them. This will only make you want to fight fire with fire and nothing good comes from that."

As for confronting the coworker — that could be a really worthwhile idea. First off, ask yourself if their behavior could directly affect you or interfere with you and your work. If so, Choquette says, you must be assertive.

"Talk to them about it directly. Stay calm. You might want to jot down what you'd like to say beforehand. Remember to sandwich any criticism between two compliments, and be open minded," Choquette says. "Maybe they have something worth hearing that could make you better at your job."

Beyond that, keeping your distance and not gossiping is important — as is documenting the negative and unprofessional interactions, Choquette says.

"You can journal your feelings in private when you get home, in therapy, or another safe place. But if needed, go to your next in command or HR with your documented facts and let them handle it," Choquette says. "Make sure you tell them you tried to go directly to the source already and it didn't work out. It doesn't look professional to skip that step, so be sure and try the avenues in your access first."

And no, it isn't always comfortable to have to take it to the higher-ups, and TBH, it's also not always necessary. Sometimes the fix really is between you and the other person, or it might even be closer to home. It might be in how you react and perceive things!

Psychiatrist Neelima Kunam M.D. tells Bustle that it is also always important to reflect inward. "One important step is to examine your own reactions to the coworker. Is there room to further reduce emotional reactions to what this coworker is saying/doing? Do they remind you of someone you haven’t gotten along with in the past? Are there triggers affecting your ability to stay calm?"

This is not to say it’s “all in your head” or that it’s “your fault” by any means, Kunam says. The goal is just to take time to clarify if any of these factors are worsening the situation.

Working it through with a therapist or even a friend can be helpful in asking yourself the right questions, too, Kunam says, as well as in getting objective ideas, and to have someone validate the experience you are having.

And as for a daily trick, speaker and personal development coach Jessi Beyer tells Bustle that one good rule of thumb that she lives by is the "five years, five minutes" rule.

"If it's not going to matter in five years, don't spend more than five minutes worrying about it. If your problematic coworker never refills the coffee machine, takes way too long at the printer, and doesn't have the best B.O. when they walk by your desk, it's probably something you can learn to let go with some deep breathing exercises," Beyer says.

But yeah, if they are impacting your ability to do your work successfully or threatening your future success at the company, that's something that would impact your life in five years, and therefore it's something you should confront now, Beyer says.

And listen, friends, know that struggles in the workplace are as common as having a hard time with family. But it doesn't have to be a stagnant situation! You can shift the dynamic.