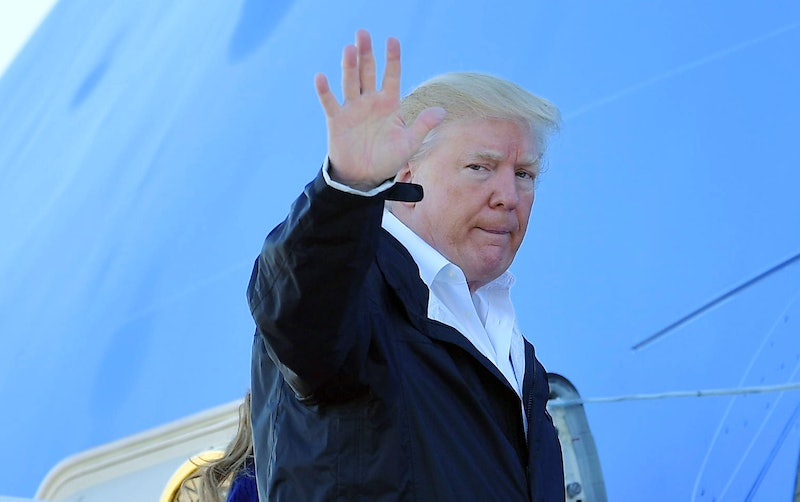 Pitting tragedies against each other can turn into an ugly game very quickly. Each unnecessary death has its own weight and its own grief attached. There's no need to compare scale or scope, but it's impossible to ignore the way our president handles them — especially the difference in Trump's response to the mass shooting in Las Vegas versus the storms that have ravaged Puerto Rico. It took him two weeks to organize a trip to Puerto Rico when his people were dying — but a trip to Las Vegas was organized almost instantaneously.

That's not the only difference, of course. Trump's attitude towards Puerto Rico has been nothing but shameful. Although Hurricane Maria's death toll technically is 17, the real force of it has yet to be known. The reason is simple: there's simply not the electricity, the water, or the basic needs to move on from this tragedy — let alone understand the scale of it. The morgues are full. It's unclear how many more will been found dead at the end of this. What is clear is that half of the people on the island don't have clean water, the vast majority of the hospitals are without power, and these people, these American citizens, need help. President's Trump's response was to not visit. It wasn't even to send a message of hope, support, and encouragement. It was to attack the Mayor of San Juan, Carmen Yulín Cruz.

From a golf course, he criticized the mayor of a city where people are dying. He did it over Twitter. The lack of respect, the lack of decency, is dumbfounding. Cruz, for her part, had bigger, less petty, priorities. “I don’t care," Cruz told Meet The Press. "He can attack me all he wants, you know, bring it on, I’m here, if it saves lives. If it gets the message in the right place, frankly my dear, I don’t give a damn.”

Then the Las Vegas mass shooting happened. Trump responded with some of his most restrained words, both on Twitter and in a statement. Announcements that he would visit Las Vegas followed soon after — he is scheduled to arrive Wednesday. "The crowd in Vegas are offered Mr Trump’s prayers; the thirsty Puerto Ricans had a golf tournament dedicated to them by a President who chose to spend the weekend at one of his luxury resorts rather than help them," The Guardian wrote. "They have no water? Let them drink from golfing trophies."

Does his lack of empathy when it comes to the victims in Puerto Rico make the victims of Las Vegas shooting undeserving of the President's attention? Of course not. But the sharp distinction in treatment cannot— and should not— be ignored. The people of Puerto Rico are already treated poorly. They don't even have the right to vote. And when tragedy struck, the President could not muster the humanity to show compassion. But when a largely white crowd at a country music festival is attacked, he could. He gave those deaths the respect that he didn't give the people of Puerto Rico. It may still have been be slightly disjointed, and in this case, overly religious, but it was the closest thing to presidential we've seen from President Trump.

He'll finally visit Puerto Rico on Tuesday, October 3. Two weeks after Hurricane Maria. Maybe he'll say the right things now that he's there, but even if he does, it can't take away his initial response. It won't erase the blatant inequality that he displayed and the way his reaction differed when the people affected were largely white and English speaking. Trump's behavior spoke volumes — and it won't go unnoticed.