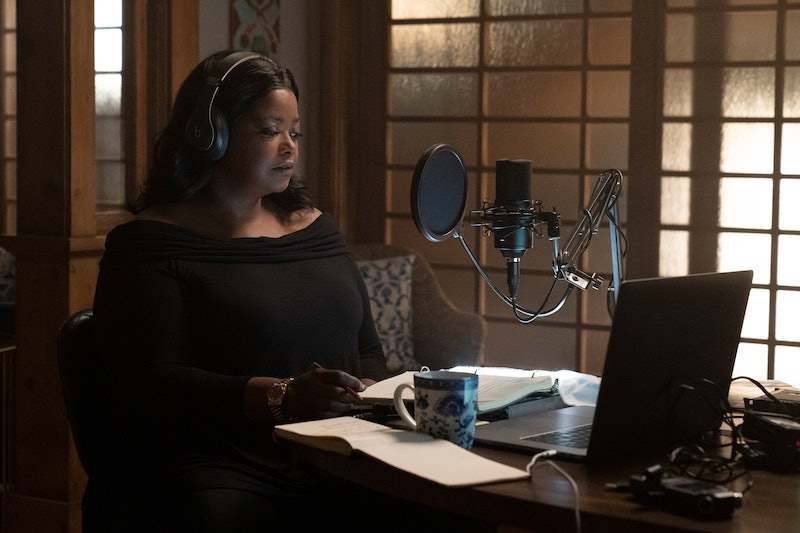 If there's one thing that brings people together these days, it's a good old fashioned murder story. Adapted from Kathleen Barber's novel Are You Sleeping, Apple TV+'s new crime drama Truth Be Told is a series invested in exploring the ins and outs of our long-standing public fascination with death — and how that can hurt the very victims involved. While the show itself feeds into our morbid obsession, it also critiques the ways in which we now consume real human tragedies and treat them, as show creator Nichelle Tramble Spellman tells Bustle, "like popcorn."

Thanks to the rise in popularity of podcasts like Serial and My Favorite Murder and TV programs like Making a Murderer and The Jinx, the true crime genre has become a prestigious pop culture phenomenon, spawning fandom names ("Murderinos"), endless Reddit theories, and Oscar-winning documentaries. While the interest in all things grisly is not new — there were lurid crime pamphlets by the mid-1550s in Britain — technology has allowed this collective hunger to expand. This has led to concerns around the effect that true crime stories may be having on our psyche — whether they connect us deeper to our humanity or disconnect us entirely — and whether enjoying them is even ethical. Consuming these tales can be cathartic and curiosity-fueling, but it's also voyeuristic, and in the absence of expert or first-person accounts, they may be wildly hyperbolic and misinformed.

"There isn't the strict set of rules around journalism [now]," Spellman says, explaining what first drew her to create the core drama of Truth Be Told and its not-always-above-board protagonist, Octavia Spencer's Poppy Scoville-Parnell. "There's always been muckraking and yellow journalism, but now with the internet, with social media, there's an opportunity for really untrained, unskilled people to give themselves that title." The podcast medium, Spellman explains, has allowed the line between professional journalist and amateur sleuth to blur, and consumers don't always understand that what they're listening to is more "opinion piece" than "hard news."

This is blurring is part-and-parcel of what made Serial so addictive, for example. Journalist Sarah Koenig (who served as a technical consultant on Truth Be Told) obtained first person accounts of a crime, but like a fan, she also speculated about the people who didn't speak to her for the show, and ran listeners through her own unverified theories.

True crime podcasts foster the intimacy of "insider knowledge," but at the same time, is it unethical to muse on a private citizen's innocence or guilt to avid listeners? As Michelle Dean writes in the Guardian, "You might think you are doing a simple crime podcast ... then you become a sensation, and the story falls to the mercy of the thousands, even millions, of bored and curious people on the internet."

Spellman, who started out as a novelist writing crime fiction, notes that by nature of their storytelling style, true crime podcasts often treat real victims like story characters rather than real survivors whose old wounds are being magnified and picked at. This is why Truth Be Told is so invested in exploring questions of accountability and appropriation, which Spellman approaches mainly through the character of Poppy, who is the very embodiment of these issues.

Described by Spellman as "a trained journalist who embraces the wild, wild west of current journalism," Poppy is a messy character who is forced to reckon with how her own sensationalist writing hindered a murder case 19 years ago. Her crime column about the murder of Chuck Burhman was instrumental in turning public opinion against Warren Cave (Aaron Paul), the Burhman's then-17-year-old neighbor, who was convicted based on scant evidence and sentenced to life in prison. After the veracity of a key piece of evidence comes into question years later — a testimony by Chuck's daughter Lanie (Lizzy Caplan) is deemed to have been coerced — Poppy realizes her life-altering mistake and strikes out to fix it, nearly 20 years later.

Poppy is "a little bit unethical. She's actually not nice," Spellman says of the print-journalist-turned-podcaster. One of the issues around true crime stories is how often the victim is dehumanized as people become interested in solving the crime — something Poppy herself is accused of doing in the pilot episode.

"What did my son want to become when he was growing up? What was his favorite subject in school?" Warren's mom asks Poppy after she springs the podcast idea on her. "You don't know, because you never wanted to know. Because that would've made my son a human being, instead of this twisted creature that you were so desperately trying to sell."

It's easy to see how Poppy's story captures the anxieties around the genre. Poppy's column skyrocketed her to fame, but a possibly innocent boy grew up in jail as a result. Poppy and her husband now live in an elegant Nancy Meyers-esque house in Marin County, but the real murderer may have gotten away. Poppy is plagued with guilt, and that speaks to very real concerns around the exploitative nature of true crime. How much are these stories actually about the victim, versus the presenter's burgeoning career? Is evidence being cherry-picked or distorted just so the creator can tell a compelling story?

As Alice Bolin writes for Vulture, "Highbrow true crime is often explicitly about the piece’s creator, a meta-commentary about the process of researching and reporting such consequential stories."

It's why Spellman made Poppy the protagonist of Truth Be Told, as opposed to Josie Burhman, Chuck's other twin daughter who narrates the novel.

"I thought that we had more of an opportunity to explore multiple families if it was told from the point of view of the podcaster," Spellman says. "Because as she digs into the victim's family and the accused's family, it starts to unravel and affect her own family. And so making the podcaster the center of the story gave us the opportunity to look at that ripple effect."

Issues arise when Poppy, in her drive to right her own wrong, begins causing problems — particularly for her own community in Oakland, which bears the brunt of the cops' anger when she begins to uncover police corruption. She's so ambitious and single-minded that she doesn't always stop to ask if what she's doing is objectively right, or just self-serving.

"I think that one of the biggest journeys of the series is 'Who is Poppy Parnell,'" Spellman says. "Because as we go forward through eight episodes, it ebbs and flows .... we'll get to a point where the audience feels like maybe they don't know her." Ultimately, Truth Be Told is just as much about the journalist as it is about the victim — which serves as its own commentary on the intertwined nature of true crime storytelling. And like most true crime, chances are you'll be hooked on Truth Be Told from the start.