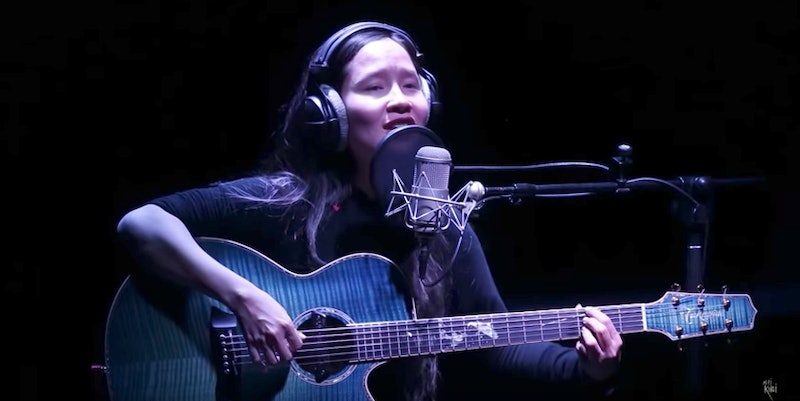 Mai Khoi may be pint-sized, but her lungs are Herculean. Perched on a makeshift stage inside a crumbling house in Hanoi, the 33-year-old pop star — who has millions of devout fans worldwide, has been dubbed “Vietnam’s Lady Gaga” due to her pink hair, in-your-face lyrics, and involvement with political activism, including meeting with then President Obama to discuss Vietnam's human rights problems. Chest heaving, nostrils flaring, guitar pounding, she sings a song that is as far as can be from the ooey-gooey, Splenda-sweet pop that Vietnam’s airwaves are known for. Here, in the land of state-approved singers, this gritty guitarist marches to a far more raucous beat.

“She’s got that 80’s Madonna swagger, self-secure woman, 'I know who I am' vibe,” says Mark Tarsia, a Grammy Award-winning producer who’s collaborated with Khoi in the past.

Today's concert is held in an abandoned building, and the vibe is very hush-hush. While Khoi's shows sell out from Sydney to Berlin, she's an outcast at home, banned from performing in her native Vietnam.

Still, the blacklisted Khoi is determined to raise a ruckus — flouting the law with invite-only underground concerts in dingy, pop-up studios. During a breathless break between sets, Khoi's booming voice wanes to a whisper. “Unlike other musicians here, we don’t ask for permission,” she tells Bustle. “We give voice to the unspeakable.”

But her bold performance isn’t going undetected. Outside, a plainclothes police officer lurks in the dark, just a few paces away.

When the show ends, Khoi is guzzling down a piping-hot bowl of post-concert bún riêu soup at a nearby noodle joint, despite the fact that it is 100 degrees out and the streets of Hanoi feel like a sauna. Seated across from her, I take in her electric pink lipstick and waist-length hair. She doesn’t look much like an A-list celeb — or a "wanted woman," for that matter — but then again, what does a "wanted woman" really look like?

This pop star is on a dangerous, dissident mission, which she lays out to me from the get-go. “[I want] to be free to say what I want, sing what I want, wear what I want, go where I want and not having someone looking over me and saying, you can't do that,” she says. These are all uncontroversial, garden-variety goals in democratic countries, like the U.S. or France; but in communist Vietnam, there’s nothing routine about them.

She darts her eyes left and right, and then leans in so close I can smell the broth on her breath. She slips me a few lyrics from her upcoming eighth album, Cuffed In Freedom, cautiously, like she’s telling an intimate secret. Her music has always been controversial — she had a hit in 2014 called “Selfie Orgasm" — but not as politically incendiary as new songs like "Re-education Camp" or "What We Want." As she quietly croons to me the forbidden verses — "Scream after scream in the streets / Green uniforms arresting people / Blood flows in front of me / My heart shrivels in pain " — I realize I’m witnessing, in real time, Khoi's ongoing transformation of a pretty pop star to a rogue activist.

"Now [that] people have a taste of freedom, they are going to want more."

Khoi spent her childhood years in Vietnam’s sleepy Cam Ranh Bay, where as a tween, she learned to play the keyboard alongside her father, a mild-mannered music teacher. After singing in teahouses and bars to make ends meet, she released her first album in 2004 with little fanfare. Then, in the 2010s, Khoi broke out onto the international pop circuit with edgy songs like 2014's "Saigon Boom Boom," which unabashedly broached taboo topics like love and promiscuity. In Vietnam's traditional culture, such frankness is a big, fat no-no. But her fans — found among the modern millennials who make up nearly 70 percent of the country's population — disagreed. She even won Vietnam Television’s Album of the Year Award in 2010.

But by 2016, Khoi reached a turning point. Though her work had not yet become political, the government began to shut down her shows due to her stage presence and sexually frank lyrics, which they did not approve. At this point, those risqué pop hits and catchy, K-Pop-inspired beats started fading to the background in favor of more American blues-laced music that focused on corruption, gender inequality and of course, "The Man," who clamped down on her artistic expression. Her earlier work was provocative, sure, but once her countercultural lyrics started touching politics — Vietnam's third rail — Khoi entered the underground.

Celebrity activists who attend protests or make red carpet declarations about their cause are a dime a dozen, but even the U.S. trend towards celebrity activism is only a recent phenomenon, says Jeetendr Sehdev, USC’s resident pop culture expert. In the past, a handful of ground-breaking U.S. stars took political stands — for instance, musician and actor Harry Belafonte was involved in the Civil Rights movement from the 1950s onward, and numerous Communist actors, writers and directors were blacklisted from working in Hollywood in the '40s and '50s during the McCarthy hearings. Today, taking up a cause or creating a new charity is a way to generate “a level of authenticity" with fans, Sehdev tells me over the phone. But Khoi's activism is a throwback to an earlier age, when being honest and outspoken about one's politics would ruin someone professionally. In an age where droves of celebrities in the U.S. and other democratic nations find that activism helps bolster their careers, Khoi's activism is sacrificing hers.

Over the past year, she’s been making the rounds at human rights forums and conferences around the world, most recently at the 2017 Global Media Forum in Germany. She's also rubbed elbows with the likes of Google’s Eric Schmidt and President Obama, making an impassioned plea for freedom of speech and artistic expression within authoritarian regimes. "Most activism happens online because it's the only space where you can speak freely," says Khoi. "Now [that] people have a taste of freedom, they are going to want more."

And last year, as election fever ran high in Vietnam, Khoi even traded the concert stage for the political podium, running for a coveted seat in Vietnam’s National Assembly, the supreme organ of state power, to be, as she puts it, “the voice of [the] youth.” Khoi says she considered the move “the responsibility of the famous," but also one of bigger ambitions: "to raise awareness about democracy and show people that political participation was possible." With her pop star status, Khoi's campaign spread like wildfire across social media. "I was also quietly confident that if I made it to the ballot, I would be elected... [but still] skeptical about the fairness of the electoral process," she says — and rightfully so.

In most countries, your chance of success as an upstart independent candidate is already slim. But in one-party Vietnam, simply running can be treacherous, says Thu-Huong Nguyen-Vo, a professor of Vietnamese politics at UCLA. Legally, anyone over 21 years old can take part in the country’s legislative elections which, since 2002, have allowed independent candidates. But in practice, those who do risk rejection, retribution, and being named a dissident — all for challenging the Communist Party. And in the decade and a half since independent candidates have been permitted, only seven have won any of the hundreds of seats in the National Assembly — and all seven of those candidates were party members. For all these reasons, the young and radical Khoi was doomed, long before her political campaign truly began.

Shortly after her political stunt, state censors disabled Khoi's social media accounts and pulled all her songs from the radio and TV as punishment. Since May 2016, Khoi has fallen from the glamour of pop star life and out of favor with Vietnam's government. She even claimed that her landlord pressured her to move out of her building at the behest of the police, though he didn’t respond to requests for comment. Even worse, Khoi claims she's also under constant surveillance — not officially under house arrest, but still closely monitored by the authorities. Her music career is stalled, since all Vietnamese singers must legally submit their lyrics and get approval for any performance or major media appearance from Vietnam’s Ministry of Culture, which didn’t respond to Bustle’s requests for comment. Cuffed In Freedom, her first political album, is her pièce de résistance — or her revenge — and will be independently released this year. But not in Vietnam.

Khoi faces an uphill battle. In recent years, this tiny Southeast Asian nation has jailed numerous activists and bloggers, rivaling neighboring China and Iran. Official stats are hard to come by, but nearly 100 people have been put behind bars, according to Amnesty International. Those who question government policies, expose official corruption or call for democratic alternatives to one-party rule risk an array of less-than-savory options: police harassment, detainment, surveillance and “kangaroo court” trials with no access to legal counsel, says Phil Robertson, Human Rights Watch’s Deputy Director in Asia. The latest example of this came in July, when a prolific blogger, Tran Thi Nga, was handed a nine-year sentence in prison after a one-day trial. Her crime: posting about political corruption and environmental abuse online.

Lately, “the Vietnamese government [has been] diversifying its approach to dissidents and activists," says Robertson — he says, dispatching ruthless, anonymous men to attack them. According to a 2017 report from the Human Rights Watch, these men wear civilian clothes, but brandish iron rods, belts and sticks to harass human rights campaigners, lawyers, activists and outspoken bloggers. It doesn’t matter who’s watching either — in the last two years, 36 documented cases of these attacks took place on crowded buses, in quiet cafés and in broad daylight.

Back at the concert, dozens of fans, friends and family pack into the second floor of a damp building on the outskirts of Hanoi, not far from Vietnam’s political nucleus. Instead of the usual vocal warmups, Khoi sucks down a cigarette before the concert to get in the zone. The pre-concert ritual works: on stage, she’s thrashing and tense. The sounds of bamboo flutes, harps and drums — a nod to Vietnam’s musical traditions — meld with wild guitar synths.

That’s when the raid begins.

A sea of army green surrounds the stage as 40 local gun-toting police officers storm the venue. Khoi gets off with a hefty fine this time, imposed by the municipal People’s Committee, which did not respond to Bustle's requests for comment.

Even in the face of obstacles, Khoi's voice will only continue to grow louder. "Show what you think, say what you see," she says "And that is the first step towards liberation, freedom for yourself."