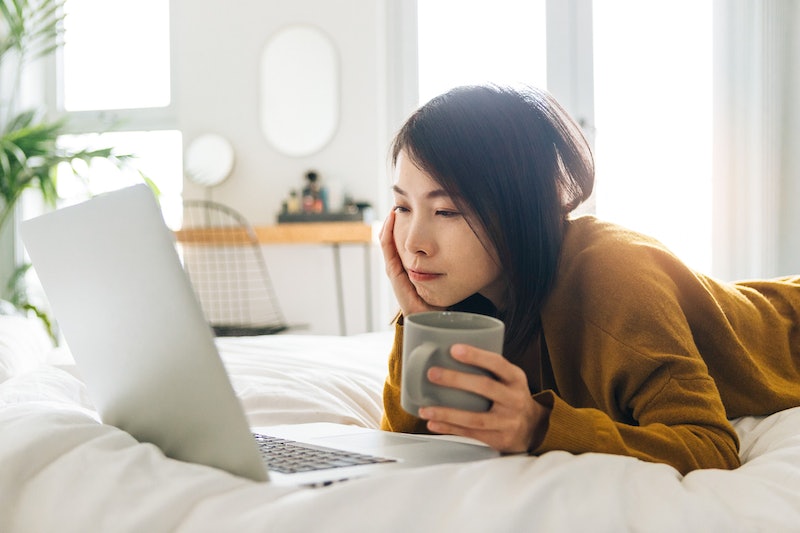 Especially if you were up late panicking about your big work project (or herding sheep on Minecraft), you might be tempted to sleep in the next day. It's an understandable instinct, but in the long run, that might not be what's best for your mind — even though it feels good to stay burrowed in your blankets. As far as your sleep schedule goes, waking up an hour later than usual can have a negative impact on your brain, as well as your overall health.

"Research shows that the timing of sleep may be just as important as how many hours we sleep," says Rose MacDowell, a sleep expert and chief research officer at mattress-reviewer Sleepopolis. While you might quickly forget your wide-eyed panic when you slept past your alarm, your brain will remember getting an extra hour of sleep. That might be a good thing if you're super tired, but it can wreak havoc on your attempts to form a consistent schedule. In other words, hitting snooze on Monday might make you a lot more likely to throw your alarm against the wall on Tuesday (and Wednesday, etc.).

Why You Waking Up Later

"Sleeping late can lower the sleep drive and make falling asleep the next night more difficult," MacDowell tells Bustle. When it comes time to wind down and get ready for bed, you'll find that you have more energy than usual, and you'll likely end up staying awake later as a result. This can throw off the next night and the next, and it can be tough to reset your brain and get back on track.

"Sleeping an extra hour can also lower sleep efficiency, which can cause similar effects to sleep deprivation," MacDowell says. "Sleep efficiency is the percentage of time spent asleep while in bed. Sleep is considered efficient when at least 85% of time in bed is spent asleep, and inefficient when less than 85% is spent asleep. Sleeping late can reduce sleep efficiency because time in bed increases and the circadian rhythm is disrupted [...] Numerous studies show that consistent sleeping and waking schedules are important for keeping the circadian rhythm regulated." One such study, published in the journal Scientific Reports in 2017, found that the more consistent your sleeping patterns are, the better your academic performance will be. The more you sleep in, the less efficient your sleep might become — which is bad news for the next early-morning study session you wanted to get in.

What Happens To Your Brain When You Wake Up Later

Sleeping later than usual doesn't just force you to rush to work — it also messes with your ability to stay focused on those spreadsheets. "If your sleep was interrupted several times during the night, for example, your brain may not be as sharp as usual, with a decrease in cognitive ability and in attention span," says Dr. Steven Reisman, M.D., who is board-certified in internal medicine. "It may adversely affect memory," which is why you might feel groggy and out of it, or possibly make silly mistakes in school or at work the next day."

While waking up late on occasion probably won't have a major impact on your brain, ongoing disrupted sleep can cause problems over time. "There may be a buildup of amyloid protein in the brain, which has been linked to Alzheimer’s disease," Reisman says. So even though it may be tempting to go to bed and wake up at different times each day, it's best to stick to a schedule as often as possible.

How To Establish A Better Sleep Routine

"It is advisable to wake up the same time each day because if one gets into a regular routine with a satisfying amount of sleep, you will likely feel more energized during the day," Reisman says. "The body's circadian rhythm or internal clock helps dictate when you are tired and awake and it is guided by variables such as light exposure and meal time. Once you have a regular ‘rhythm’, this will help in more restful and restorative sleep."

In order to avoid these disruptions to your regularly-scheduled focus, "go to bed and wake up at the same time, even on weekends," MacDowell says. "Reduce your exposure to light at night, particularly blue light from TVs and electronics. Try to go to bed earlier, and resist the urge to sleep in or alter your sleep schedule." By waking up at the same time every day, you'll be doing your brain (and your long-suffering morning alarm) a huge favor.

More like this
11 Exercises For Dowager's Hump That'll Help Your Neck Posture
By Carolyn Steber
Kourtney Kardashian’s Wellness Guru Shares Her #1 Tip For Better Health
By Taylor Jean Stephan
10 Primal Movement Exercises That'll Improve Your Mobility
By Carolyn Steber
Here’s What Health Means To People In 2023
By Isabella Biedenharn
Get Even More From Bustle — Sign Up For The Newsletter
From hair trends to relationship advice, our daily newsletter has everything you need to sound like a person who’s on TikTok, even if you aren’t.