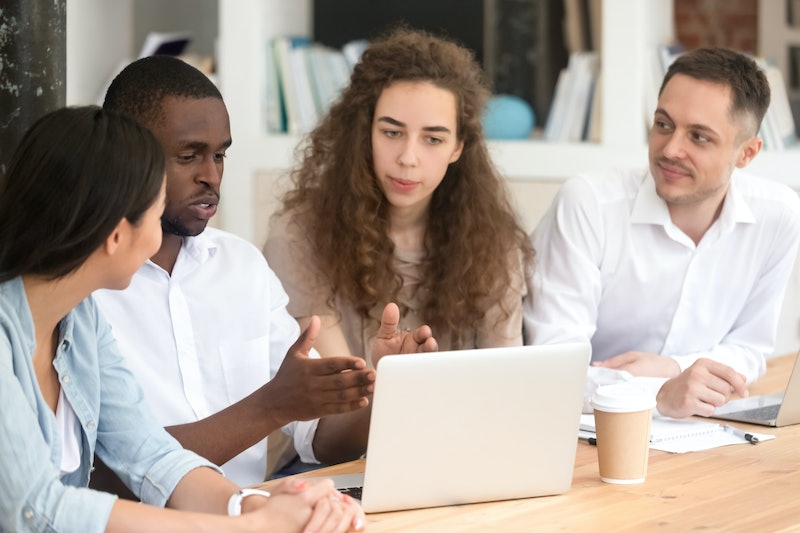 Whether you're a diehard astrology fan or not, it's super tempting to spend a significant amount of time researching the movement of the planets. This is especially true for Mercury retrograde aka the time when everything in your life can be turned upside down. And it's not just personal relationships that can be affected, but communication in the workplace too. So how can Mercury retrograde July 2019 affect your work relationships?

Well, it's all to do with what Mercury controls. As Susan Miller's Astrology Zone states, "Mercury rules all types of communication, including listening, speaking, learning, reading, editing, researching, negotiating, selling, and buying." If that wasn't enough the planet can also affect "all formal contracts and agreements as well as important documents."

When Mercury is in retrograde, communication can go topsy-turvy. As Refinery29 explains, a planetary retrograde means that a planet appears to be moving backwards for a few weeks. (In reality, it isn't; it's just an optical illusion from our viewpoint from Earth.)

Mercury's retrograde occurs around three or four times a year, notes Insider. The current one started on July 7, 2019 and is set to last until July 31, so you've still got a couple of weeks of potential chaos.

Poor communication and misunderstandings are the most likely effect. This could manifest in the workplace as an agreement that someone reneges on or a conversation that someone can't remember happening. To avoid the pitfalls of this, try and have important discussions in writing or, at the very least, follow up an IRL chat with an email confirming what was said.

Be careful what you say, too. Read everything over before you send it to check for mistakes and practice formal conversations so you can clearly get your message across. Some astrologers also recommend steering clear of gossip as there is a fair chance that the person will find out you were talking behind their back.

Try and put off any important decisions, too, whether they're made by you or by a colleague. "Decisions tend to be changeable" during Mercury retrograde, astrologer Constance Stellas told Refinery29. Deciding on the direction of a particular project, for example, could end up causing you unnecessary stress when minds are changed later on.

Some people may feel the effects of Mercury retrograde more than others. Astrologer Lisa Stardust previously told Bustle that fixed signs like Taurus, Leo, Scorpio, and Aquarius could see their careers affected the most.

But the period isn't all doom and gloom. Instead of taking on a new project and potentially facing problems, use the time to your and your colleagues' advantage by finishing off any outstanding tasks. Doing a spot of admin, like backing up important documents, is also worthwhile as is taking the opportunity to be more direct in your communication. So if you've been wanting to say no to a particular workplace request, now's the chance to do it.

And if you're still getting to grips with the ins and outs of Mercury retrograde, prepare yourself for the next one. It starts on Halloween 2019.

More like this
These 3 Zodiac Signs Could Write A Bestselling Novel
By Brittany Beringer
Why Blake Lively & Ryan Reynolds Seem Like A Perfect Match, According To Astrology
By Nina Kahn
TikTok Has A Genius Old School Hack For Saving Money
By Sophie McEvoy
Your 2023 Retrograde Calendar — & How Each Affects You
By Brittany Beringer
Get The Very Best Of Bustle/UK
Sign up for Bustle UK's twice-weekly newsletter, featuring the latest must-watch TV, moving personal stories, and expert advice on the hottest viral buys.