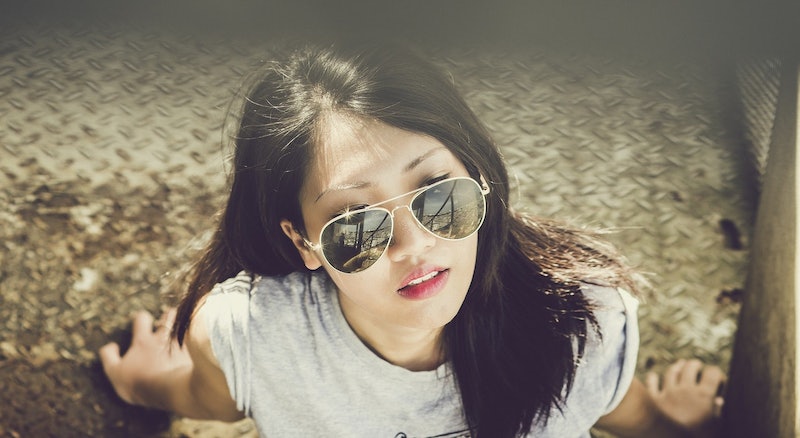 "Once we go through an eclipse, we can never go back to the former situation again, for the universe wants us to make progress, not go back to good old days," Miller explained in her guide to coping with eclipses. "That option is taken away, forever. No matter what occurs, it will become evident that the universe is intent on moving you forward. Eclipses often mark a major turning point."

While you might come to a realization during the solar eclipse, it's best to wait a little before taking any action. "The energy of an eclipse is at its strongest during the two days before and three days after its occurrence," Kate Hagerty, life-purpose and relationship-intuitive coach, explained on Soul Purpose. "Most astrologers will suggest waiting a week or so before making big decisions or taking drastic action so the eclipse energy can settle a bit first."

Stay Open To Receiving The Messages From The Solar Eclipse

Miller advised that any messages you receive during the eclipse should be taken seriously. "Realize that there is little or no chance of getting things reversed," she explained. "Eclipses demand that we forward, not backward to the way things used to be. Save your dignity and do not plead — eclipses are final. If you break up, don’t plead for the other person to come back."

Additionally, she echoed Hagerty and recommended that you wait to implement any big decisions you make during the eclipse. "Bide your time and act a few weeks after the eclipse, at a time when less static will fill the air."

If you're impatient like me, waiting to take action can be difficult, but remember that you're likely to experience extreme emotions during the solar eclipse, and decisions made in haste can't be undone. "As humans, experiencing all this can feel like upheaval, but eclipses are 'cruel to be kind,' and major growth can take place as a result," Hagerty noted. "This makes it a perfect time to leap forward into the new, even if we may feel cosmically 'love shoved' there."

This might sound a little like a mixed message. Basically you can decide to make a leap, which effectively closes a door to the past, but any actual leaping should be done after the pixie dust from this karmic phenomenon has settled, and illuminated your path forward.

Astrology King noted that the Aug. 21, 2017 solar eclipse at 28°52′ Leo falls very near to the brightest star of Leo Constellation, the fixed-star Regulus, which is favorable for confident and adventurous new beginnings. Additionally, the presence of Uranus will add excitement and enthusiasm to the mix, making success highly likely.

"The combined effects of Regulus and Uranus would suggest rapid bursts of interest and activity. Permanent change is possible, and in fact likely due to the aspect pattern formed by Mars, Jupiter, and Saturn," Astrology King explained. "This minor grand trine with Jupiter suggests long-term growth and happiness due to determined and sustained effort."

If you're on the precipice of something new, the solar eclipse could provide the support you need to decide to leap into a thrilling and unknown future, like jumping through a portal of glittery stardust. While this can feel scary, no one ever got everything they wanted by staying in their comfort zone. Embrace the excitement of new opportunities, and trust that — as long as your intentions benefit the greater good — the universe has your back.

Think of it kind of like a cosmic trust fall. You have to relax, and let go of self-destructive behavior, in order to ensure a soft landing into the open, supportive arms of the universe. And, you just might emerge energized like the bright star you are on the other side. Don't let self doubt dim your shine. Trust me, you've got this.