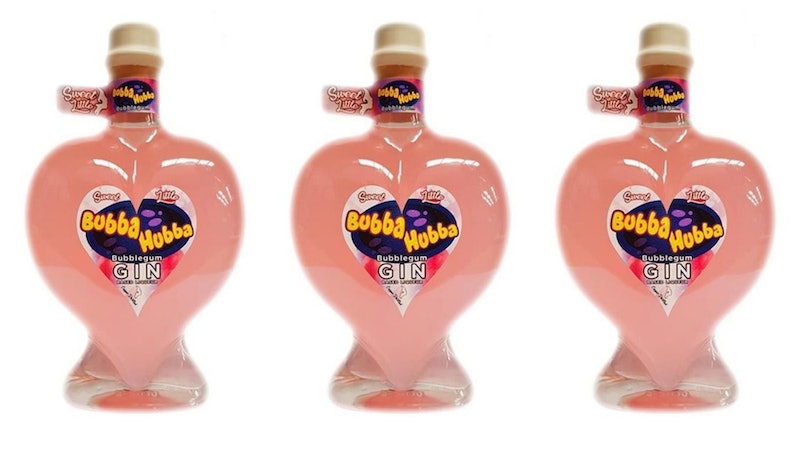 Getting a little rosé’d out? Good news: There’s a new pink, boozy drink in town that’s perfect for summer — and this one will get your nostalgia engines going, too: Hubba Bubba bubble gum-flavored gin liqueur is a thing now, thanks a UK-based company called Sweet Little Liqueurs and an online gin-focused retailer called Ginspiration. It is pink; it is bubble gum-flavored; it is boozy; and if you mix it with a little tonic and garnish it with a strawberry or sprig of mint, you’re looking at a delightfully cheerful summer cocktail. Honestly, one of the most enjoyable parts of the whole ‘80s and ‘90s nostalgia trend to me is seeing grown-up versions of the ephemera that populated my childhood, so I’m very much here for this — even though I’m not really into bubble gum or gin.

When it comes to bubble gum brands, Hubba Bubba was actually rather late to the game. The first commercial chewing gum was developed in the 1840s; the company perhaps most synonymous with commercial chewing gum, Wrigley, was founded in 1891; and bubble gum was invented in 1928 — but Hubba Bubba didn’t hit the scene until 1979, 50 years after bubble gum’s first appearance and over a century after the arrival of commercial chewing gum more generally. Still, though, it proved popular; initially only available in the United States, it spread to Australia, Canada, Croatia, Germany, and the UK in the 1980s. Weirdly, Wrigley also discontinued the production and sale of Hubba Bubba in the United States around that time. The gum was reintroduced to the U.S. market in 2004, however, where it has remained ever since.

Sweet Little Liqueurs, meanwhile, appears to be a new-ish company; it’s identified as such on its Ginspiration page, at least. Based in Manchester, UK, it specializes in unusual, copper-distilled gin liqueur flavors intended to “bring back childhood memories” — so, naturally, there’s a bubble gum-flavored variety named after Hubba Bubba.

The bubble gum flavor appears at almost every stage of the tasting experience, apparently; it presents on the nose, the palate, and the finish, according to the item’s product page. Suggested mixers include lemonade (by which I assume we mean Sprite or a similar fizzy, citrus-flavored drink, rather than lemon squash), prosecco, and of course tonic water — or you can go ahead and drink it neat.

Worth noting, though, is the fact that Sweet Little Liqueur’s Hubba Bubba creation isn’t strictly bubble gum-flavored gin; it’s a liqueur that uses gin as its base. That means it’s a lot sweeter and more concentrated than straight-up gin is — to give you a point of comparison, sloe gin and Pimm’s No. 1 Cup are both gin liqueurs — so, uh… just keep that in mind if you choose to drink it neat.

Given its decades-long absence right in the middle of prime nostalgia territory, Hubba Bubba occupies a unique space for U.S.-based adults: If you weren’t around during the ‘80s, you won’t have grown up with the stuff, so it won’t hit your childhood nostalgia buttons at all; however, if you were a tween in the early- to mid-2000s, then that’s where Hubba Bubba fits in your cultural landscape. (Me? I’m an older millennial, so I definitely remember Hubba Bubba being on shelves when I was a kid; personally, though, my bubble gum loyalty lay with Bubble Yum.)

Still, though — folks who were tweens when Hubba Bubba came back to the United States are adults now. That means that they’re drinking age, which in turn means that the boozy nostalgia hits all the right notes for both older and younger millennials alike. What’s more, Hubba Bubba has been pretty much continuously available in the UK since the time it went out of production in the United States, so it makes a certain amount of sense that Hubba Bubba-flavored gin would emerge across the pond, rather than here in the U.S. of A. I’ll admit that I probably wouldn’t drink this stuff myself, but that’s purely because — as I mentioned earlier — I am a fan of neither bubble gum-flavored things, nor gin. There’s still plenty of aesthetic appeal to the stuff even without drinking it, though: The bottle! The logo! The feels!

Oh, and hey, if you’re like me and don’t really dig on artificial bubble gum flavoring, Sweet Little Liqueurs has plenty of other nostalgia-inducing tricks up its sleeve. Jammy Dodger fan? There’s a gin liqueur for that. More into Custard Creams? There’s a gin liqueur for that, too. Longing for a blue raspberry ice lolly? Here you go. And — best of all — there’s even a color-changing option on the menu. Not unlike Old Curiosity’s color-changing gin, Sweet Little Liqueur’s violet-hued gin liqueur turns pink when mixed with tonic water. Just, y’know, in case you like your cocktails a little on the theatrical side of things.

Sweet Little Liqueur’s Hubba Bubba gin liqueur is out of stock at Ginspiration for the moment; also, Ginspiration only ships to the UK mainland. If you happened to be based over there, though, it’ll cost you between £22.99 and £29.99 for a 50cl bottle. (£22.99 is the sale price; it’s usually £29.99.) And in the meantime, you can try to get your hands on 3 Pugs Bubble Gum Liqueur instead — because yes, that is a thing. Have fun, kids!

More like this
TikTok’s Viral Tunacado Sandwich Is The Internet’s Favorite Lunch Right Now
By Alexis Morillo
Heinz Just Relaunched A Bean-Tastic '90s Fave
By Sam Ramsden
Pepsi’s Festive Flavour Is Finally Coming To The UK
By Sophie McEvoy
How Long Does Leftover Stuffing Last? Here's When To Toss It
By Chelsey Grasso and Alexis Morillo
Get Even More From Bustle — Sign Up For The Newsletter