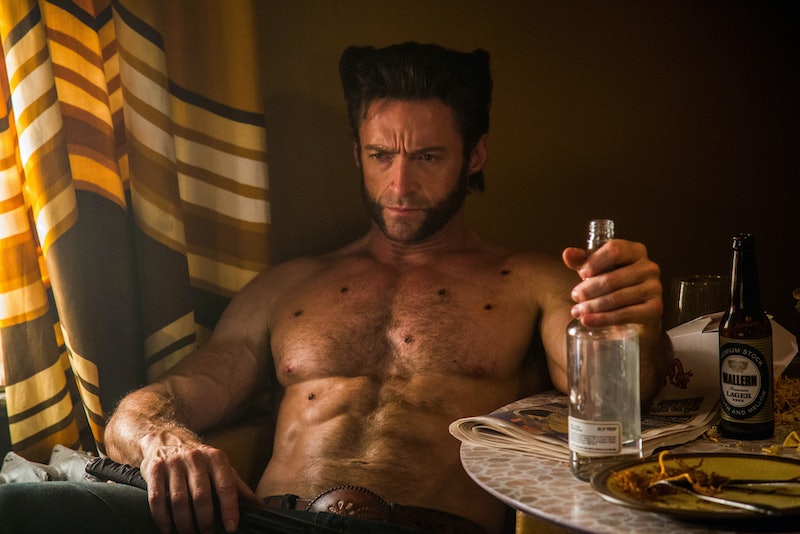 We've known for a while that Hugh Jackman intends to hang up his adamantium claws after the upcoming Logan, but some fans — including Ryan Reynolds himself — were holding out hope that Wolverine might be in Deadpool 2. Sadly, it doesn't appear that those hopes will come to fruition, since Jackman himself has finally spoken out and confirmed that Logan will indeed be his last time playing the mutant known as Logan. The conclusion to his spinoff trilogy will be the actor's ninth time in the role, and he has definitely earned a break at this point. Still, it's sad to think that we'll never see Jackman in his most iconic role again.

He addressed the Deadpool rumors in a Facebook live interview this week. "Look, if that movie had appeared 10 years ago, probably a different story," he said, as reported by Screen Rant. "But I knew two and a half years ago that [Logan] was the last one. The first call I made was to [director James Mangold]. I said, 'Jim, I got one more shot at this.' And as soon as Jim came up with the idea and we worked on it, I was never more excited. But, it feels like the right time." Despite his retirement from the superhero genre, Jackman still wishes Golden Globe nominee Reynolds all the best. "Deadpool, go for it man, do your thing. You don’t need me."

Hugh Jackman as an actor, and Wolverine as a character, have both been such a large part of the X-Men cinematic universe since its inception that it's almost impossible to imagine the franchise without him. Of course, the show must go on… but the question is, will the X-Men films now take place in a world without Logan?

As an integral member of the team of mutant superheroes, that seems like a dicey proposition. And considering the brand-name recognition that comes along with Wolverine, it seems unlikely that 20th Century Fox would simply let the character fade away into obscurity.

I know, I know; Jackman is Wolverine at this point. But before you go crying "too soon!," remember that Christopher Nolan's and Christian Bale's take on Batman was considered just as iconic after the conclusion of the Dark Knight trilogy — and that didn't stop Warner Bros. from resurrecting the character in a new incarnation just four years later. (Not to mention the revolving door of Spider-Men we've had over the past decade.) It's pretty much a given that the studio will want to recast Wolverine at some point… and they may actually have the perfect opportunity to do so coming up sooner rather than later.

What better way to introduce the world to a new Wolverine than by having him pop up unexpectedly in Deadpool 2? The spinoff is not just an incredibly hot property that would serve as a terrific launching pad for a new incarnation of a popular character. It's also the most meta franchise in the X-Men cinematic universe. The first Deadpool was filled with sly humor, references to other X-Men films, and fourth-wall breaking monologues.

It's easy to imagine the scenario: a new actor playing Wolverine pops up in the sequel in a cameo role, and only Wade Wilson notices and comments on his sudden change in appearance. This would be an easy and thematically appropriate way to hang a lampshade on the issue of the character's recasting and a get a new actor into the role without rewriting the continuity of the entire X-Men universe.

Given the fact that Deadpool 2 isn't scheduled for release until March of 2018 — and production doesn't even start until sometime this summer — that leaves Fox with plenty of time to do a stealth casting search for the new Wolverine and write him into the upcoming sequel. That solution would kill at least three birds with one stone, delighting fans with an unexpected cameo, seamlessly integrating the new version of the character into the existing continuity, and keeping one of their franchise's most popular heroes relevant post-Hugh Jackman's retirement.

Remember, if a new Wolverine appears in Deadpool 2… you heard it here first.