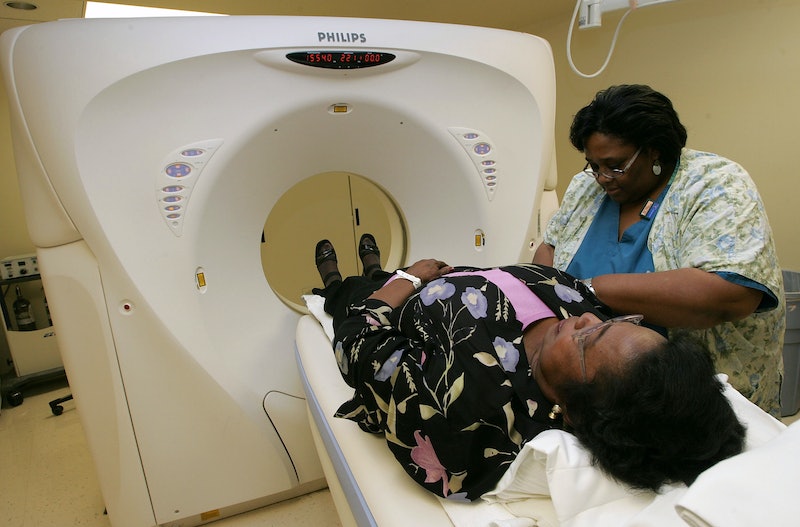 Sometimes it can be hard to look at a big number — 24 million, for example — and comprehend how many people that actually means. One particular hashtag, however, gives those people a voice. "I Am A Pre-existing Condition" on Twitter shows how the GOP's inhumane Obamacare repeal plan will affect individual lives — and not for the better. That alone should be a wake-up call for Republican lawmakers.

The hashtag arose, of course, because of the AHCA's treatment of people with pre-existing conditions that can qualify them for higher premiums or denial of coverage. For example, being a survivor of sexual assault or domestic violence is a pre-existing condition under the terms of this bill, as is having been pregnant or having gotten a C-section. The AHCA will severely hurt mental health coverage, too, erasing the gains that came under the Affordable Care Act for the approximately 20 percent of Americans who struggle with mental illness. And that's not even getting to people who simply get sick or are born with a disease that costs a lot of money to treat — type one diabetes, for example, or Lupus, or a congenital heart defect.

In short, the AHCA getting through the House with such limited provisions for people with pre-existing conditions has left a lot of people fearing for their lives, and now they're all coming out on Twitter.

One Republican congressmen even said that the bill rewards people "who have done things the right way," implying that people with pre-existing conditions must have made some kind of a choice to get to that point.

The discussion surrounding this bill has led more than that one congressman to say things that terribly dehumanize the people whose health will be affected. Jason Chaffetz's now infamous iPhone quote implied that poverty was a choice, and that simply choosing to pay for health care instead of an expensive phone would solve all of the problems. Paul Ryan tried to explain away the pre-existing conditions problem, but only managed to obfuscate the facts and prove that his plan is, in a word, heartless. As many people have pointed out on Twitter, a rapist could keep his inexpensive health insurance while his victim would get those higher premiums for the pre-existing condition of having been the victim of sexual assault.

It's a callous, inhumane bill, bowing to the terms of a callous ideology and leaving actual people out in the cold. I challenge the members of the House of Representatives to look through these hashtagged posts and not feel that they have made a heartless choice. More than that, I challenge all senators considering a vote for this bill to have a quick scroll through and then try to justify it.

#IAmAPre-existingCondition shows the humanity behind the numbers. It's the breast cancer survivors, the vets with PTSD, the diabetics, the sexual assault survivors, the people who require constant pain medication after terrible car accidents. It's the parents whose children survived childhood diseases who thought they were done worrying about how they'd pay for the medication. It's the mothers whose C-sections saved them and their children — or just mothers in general, as most of them went through a pregnancy to get to that point.

Sometimes it's hard to remember that all the calls to resist aren't just in the abstract. This is a great reminder that it's about real people, and it's more important than ever. Resisting this bill isn't about an ideology, or the legacy of a beloved president. It's about real, living, breathing people.