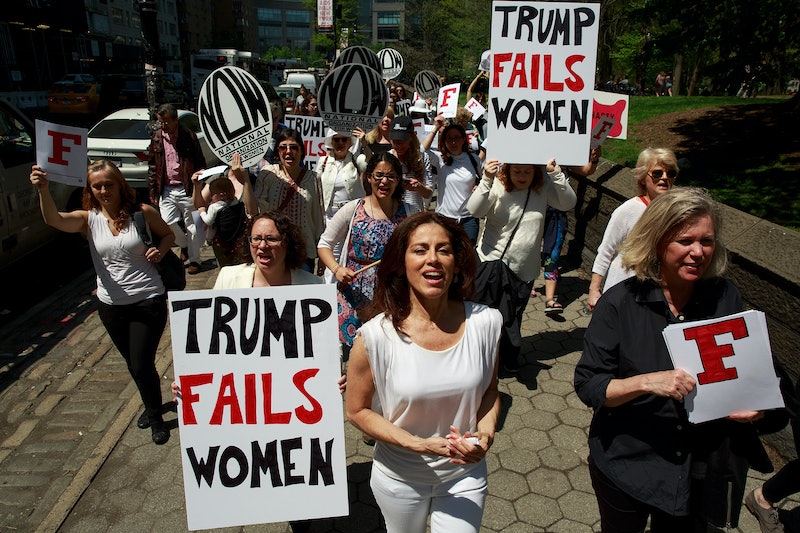 The House of Representatives passed the American Health Care Act on Thursday, and one thing is clear: In Trump’s America, being a woman is a “preexisting condition.” And if this law passes the Senate, insurance companies will be able to charge you as much as they want if you have a preexisting condition. While the Affordable Care Act (aka Obamacare) brought historic changes to the health care industry when it comes to reproductive health and women’s health, the AHCA would strip many of those hard-won gains.

“This is a terribly bad piece of legislation,” Dr. Diane Horvath-Cosper of Physicians for Reproductive Health tells Bustle. “It was bad the first time they tried to bring it up to vote and weren’t able to, and the amendments they’ve added have not made an impact at all. For women, it’s the same bill as before, because it permits the same types of things — including basically not covering contraception.”

The AHCA was poised to go to vote in late March, when House Speaker Paul Ryan pulled the bill in the final hour because the Republicans didn’t have the votes to pass it. Despite the fact that Speaker Ryan said that we’d be “living with Obamacare for the foreseeable future,” the AHCA has risen again, just over a month after it supposedly died. But this time, it has changes that were specifically made to appeal to the hyper-conservative House Freedom Caucus, whose opposition to the original version of the bill was the reason House Republicans weren’t able to get enough votes the first time around.

And it worked. The revised AHCA bill passed the House this afternoon, and will head to the Senate — where it’s expected to face stronger opposition — when it returns from an 11-day recess. And you know what that recess means? Senators are back in their home states; in your home state. It means it’s important that they hear from every woman about just how messed up it is to take away our reproductive health care and still charge us more because of our gender. So in order to get you prepped for the battle ahead, here’s how the AHCA treats being a woman as a preexisting condition.

The new law specifically says that insurance companies can’t practice “gender rating” anymore, which is charging women more than men for the same services. It’s a provision that was introduced under the Affordable Care Act, and on the surface, at least, it’s great that it’s included in the AHCA. However, when you look more closely at the law, it becomes clear that women will be charged more than men for health care, because the AHCA eliminates the essential health provision.

Passage of ACHA would, in effect, make pregnancy both more expensive and more dangerous.

Under the Affordable Care Act, there are 10 “essential health benefits” that health insurance companies legally have to cover. Of the 10, eight disproportionately affect women based simply on our bodies. For example, "maternity and newborn care” — one of the biggest medical expenses a woman might face in her life time, according to Dr. Horvath-Cosper — is on that list. Under the AHCA, states would be able to decide whether or not they will require insurance companies to cover maternity care.

Other essential health benefits that disproportionately affect women are mental health services, prescription drugs, emergency visits, rehabilitative services, preventive services (this includes contraceptives, well-woman visits, domestic violence counseling, well-baby and well-child visits, breastfeeding support, and vision screening for children), and pediatric services. Under the AHCA, states would no longer be required to cover any of those services in their public insurance exchanges.

Before the Affordable Care Act, rape, sexual assault, postpartum depression, C-sections, and surviving domestic abuse could all be considered preexisting conditions. That means that if a woman was raped and she went to the hospital, she could end up paying higher premiums for the rest of her life. Or if she had a C-section or if her husband beat her or if she suffered from postpartum depression, the same thing could happen.

Currently, private insurance plans typically cover abortion — a constitutionally protected health procedure under Roe v. Wade — as long as the state doesn’t ban it, but if the AHCA passes, individuals will no longer be allowed to use their federal financial help in order to buy an insurance plan that offers abortion coverage. So if you get a subsidy from the state (which more than 85 percent of the 20 million people who have enrolled in the health insurance exchanges under the ACA do), you can’t go with a company that covers abortion.

This move effectively coerces insurance companies to drop abortion coverage, because not doing so would result in losing access to the millions of clients in the health insurance exchange. That means even people who get their insurance through their employer or any way other than through the health insurance exchange would lose coverage as well. And as a reminder, a significant proportion of American women will have an abortion in their lifetime.

The cost of birth control falls disproportionately on women, but the Affordable Care Act alleviated much of that cost with its no-copay birth control provision. While the AHCA doesn’t specifically cut out that provision, experts say that it will result in lost coverage for millions of people. For women who lose coverage, that also means losing access to no-copay birth control.

Every woman in this country should have access to health services, including birth control. In my opinion, this should not be a political issue; this is a health issue.

“Every woman in this country should have access to health services, including birth control,” Dr. Gelman says. “In my opinion, this should not be a political issue; this is a health issue. Many women not only use birth control as a contraceptive, but to manage chronic illnesses such as endometriosis, Polycystic Ovary Syndrome (PCOS), Adenomyosis and dysmennorhea. It amazes me that in 2017, this concept needs to be debated.”

More like this
Here’s Where The NHS Nurses’ Strike Currently Stands
By Sophie McEvoy
25 Inspiring Quotes From Black Women To Celebrate Black History Month
By Kyli Rodriguez-Cayro and JR Thorpe
6 Anti-Police Brutality Organizations You Can Support Right Now
By Syeda Khaula Saad and JR Thorpe
Watch Jacinda Arden’s Devastatingly Honest Resignation Speech
By Sam Ramsden
Get Even More From Bustle — Sign Up For The Newsletter
From hair trends to relationship advice, our daily newsletter has everything you need to sound like a person who’s on TikTok, even if you aren’t.