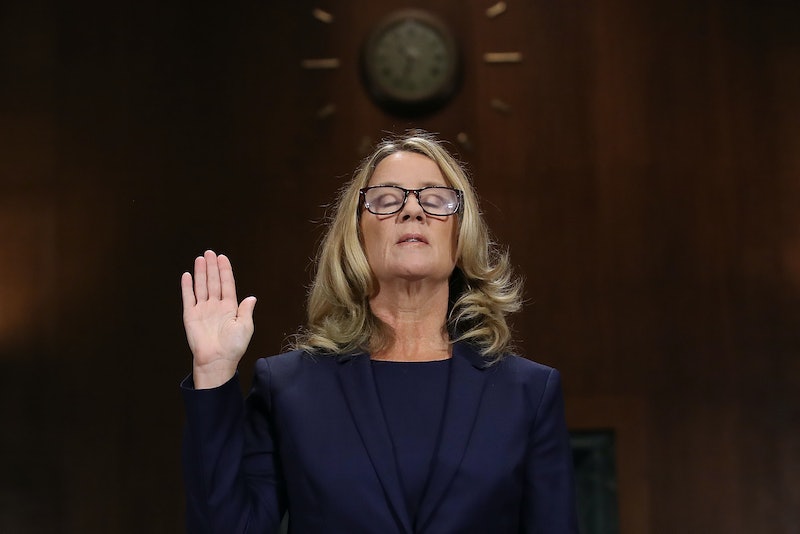 Since Dr. Christine Blasey Ford addressed the Senate Judiciary Committee, I’ve thought about one detail from her testimony constantly: the one-piece swimsuit she wore on the night of the alleged sexual assault.

I think of the way Ford’s voice rose while saying, “Brett groped me and tried to take off my clothes. He had a hard time because he was very inebriated, and because I was wearing a one-piece bathing suit underneath my clothing.” I turn the detail of the one-piece over in my mind, imagining the elasticity of it, and also the sheer coincidence of Ford having worn this, of all things, under her clothing.

Most women can name a seemingly insignificant thing that saved them.

I can imagine that, for the past three decades, Ford has dwelled on her one-piece swimsuit as well, as it seems to be one of the few saving graces she had the night she alleges Brett Kavanaugh attempted to rape her, allegations which Kavanaugh has categorically denied. One of the reasons Ford's allegations seem so credible to some women is because they have their own version of this one-piece swimsuit — which is to say, most women can name a seemingly insignificant thing that saved them from an unwanted sexual experience.

When I got my first car, I was so thrilled with the freedom that I took to driving to a diner in the earliest morning hours and eating by myself. I picked at my omelet and watched the cars speed down the boulevard. I loved this routine, but I wasn't yet aware that being a woman alone in the world during those hours made me susceptible to danger. I learned that fact quickly when a fellow customer followed me to my car and pushed me against it.

A server from the diner was having a cigarette outside and ran to my aid, causing the stranger to run away. The chain of events had happened so quickly that by the time I had registered I was in danger, I was already out of danger. I don’t know if that stranger wanted my body, my wallet, my car, or just to push me, but I do know that if the server hadn't been having a cigarette at the exact same time, the stranger likely would have taken whatever he wanted from me.

And like most women, I imagine, I have more stories in which something seemingly insignificant had saved me — someone accidentally entering the bedroom, a light switch being flicked on, cops breaking up a party.

Those supporting Kavanaugh have argued there’s reason to doubt Ford’s claims because she can astutely recall certain details, but she’s unable to recall the location of the house or how she got home. At a recent rally in Mississippi, President Donald Trump even mocked her inability to recall such details to a crowd delighted with such jokes. But Ford, a psychology professor, explained the biological reason behind such lapses: “The neurotransmitter epinephrine codes memories into the hippocampus, and so the trauma-related experience is locked there, whereas other details kind of drift.”

Something as random as wearing a one-piece swimsuit can feel like a saving grace.

Women often take stock of the environmental elements, weighting the ones working to their benefit, like a street being well lit, and the ones working against them, like walking alone. In the case of Ford's allegation, the specific details she recalls — their being on the second floor, the loud music, the narrow staircase, her one-piece swimsuit, Mark Judge's jumping on the bed — were all specific elements that either made her situation more difficult (the former three) or aided in her escape (the latter two).

They're the types of elements that women so often tally — measuring the weight of a closed door, a dark room, a body stronger than theirs. Women have mental checklists to assess the amount of danger they’re in, and if they’re in danger, how exactly to survive the circumstance.

Women can often feel helpless — our bodies usually outmatched, our credible allegations of sexual assault diminished to punchlines, and the judicial system rarely sufficient. It would be ideal to not live in a world where sexual violence against women is so common and so inconsequential to the perpetrators, but the current reality is that the Rape, Abuse, and Incest National Network reports one in six women will be the victim of an attempted or completed rape within her lifetime. Thus, women do feel helpless, so much so that something as random as wearing a one-piece swimsuit can feel like a saving grace.

This is not to say that men and non-binary people aren’t also victims of sexual violence too, because they are. But men like Kavanaugh — men who are the perfect storm of wealth, privilege, and status — don't have to learn the mental skill of weighing the environmental elements working in their favor and against them. Men like Kavanaugh are the ones with friends in the room, whether that room be at a house party or at a Senate Judiciary Committee hearing.

The Senate confirmed Kavanaugh to the Supreme Court of the United States — giving him a lifetime appointment to the highest court of the land. And I'm still thinking about all the women who have their own version of Ford's one-piece swimsuit, and how our government has failed them.