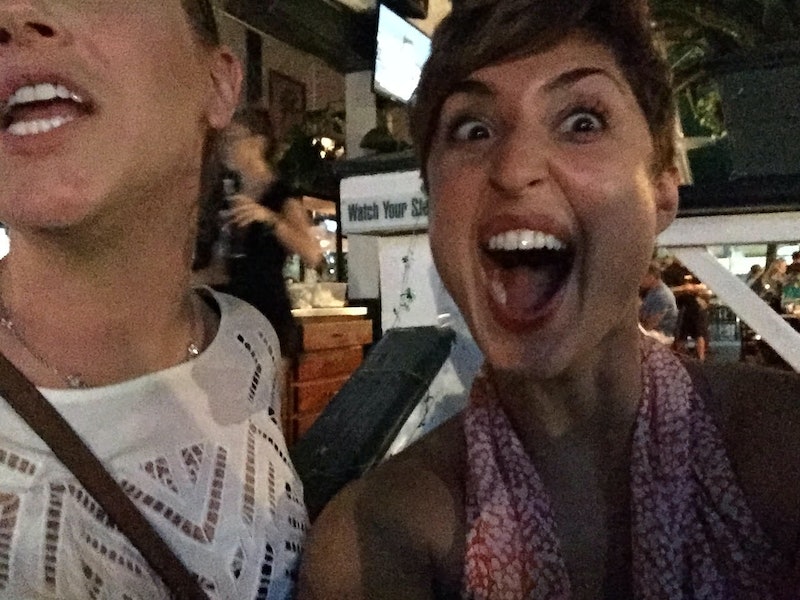 Men in tuxes and the scent of expensive perfume were clouding my judgment. Me? For me? Was I supposed to pay for anything in here? I didn’t know. Do you offer payment when you’ve just scooted past a security checkpoint and lied about your identity to sneak into a high-profile celebrity wedding? Does currency exist in this world? Does anything I say or do matter at this point?

I settled on a martini and can’t remember whether money changed hands. I meditated on what I’d just done.

I'd wedding crashed. Not Chazz Reinhold. Not some archetype of a sexy cat burglar in the shape of Angelina Jolie — me.

Me, who at the age of 5, admitted to turning away from the wall during a kindergarten time-out even though my teacher wasn’t looking; the same girl who, as a teenager, never tried to sneak out of the house and only once — once! — in her entire high school career ever lied about going to a party.

This is the same person who BS’ed her way into a fancy soiree at a ritzy hotel studded with security? I’m very proud to say, as I reflect on the events of that evening, yes, it is. I became someone who breaks the rules that night, and I haven’t once looked back.

Allow me to set the scene: It was late November 2015 in West Palm Beach, Florida. I was just wrapping up a glorious reunion with my old friend Rob at a spot held in equal esteem for its pricey avocado-based menu and turned-up brunches. After hours of giggling and enjoying truffle fries and ceviche, Rob and I made the very adult decision to stay much longer than we’d planned. Why? Frankly, because sh*t was starting to get good.

Almost comically, a scruffy, bearded DJ materialized pretty much out of the earth, tables were moved to make way for bongos and a parade of men in storm trooper suits — the pink wine was flowing, and the vibe was right. I was giddy, I was amped up. I was riding the high on my Rob reunion and looking for trouble.

This excitement, I would later realize, set the pace for the whole night. As I made my way to the bar to refresh our drinks, Rob informed me he needed to leave, likely coming to his senses over how long we’d been there and how much money we’d already spent. I did not ask questions because I didn’t need to. I’d already made two new friends.

After some silly banter and sizing each other up — each of us finally screaming our names into the others’ ears — these friends, I discovered, were buzzing on my frequency.

“You know, there’s that wedding tonight, on the island,” one of them shouted, his face pressed against my ear. “I really want to go.”

I was well aware that the historic hotel hosting the very handsome, very famous couple’s nuptials that evening would be on high alert.

Now, most people have at least a tangential awareness of Palm Beach’s reputation. Generally speaking, it’s synonymous with two things: Old money and exclusivity. Considering my new friend was from out of town, and I really wanted to show him a good time, I started talking myself into the idea of making our way over there. I was well aware that the historic hotel hosting the very handsome, very famous couple’s nuptials that evening would be on high alert. It was in the paper, it was everywhere, but the hotel itself was not surrounded by a moat or behind 20-foot walls. There was only a humble driveway leading to its gate, and all you needed to do to get in was… I didn’t know, act confident? In truth, I’d never done anything so bold before, but I was into it. I was super into it.

“Oh,” I finally exclaimed, swishing the ice in my rum concoction like a lady who’d seen some things. “We are absolutely going.”

And that was that. A few hours and costume changes later, I took off with my new friends in an Uber over the bridge from My Side Of The Tracks to Glamoursville. A mere three miles from our original location, we were a world away from the people we used to be. Well, at least I was.

Under the cover of night (and aided by an exceptionally chill Uber driver—five stars!), we rolled up to the security gate. A car full of underdressed young people, cheerily fumbling with our wallets and squirming like toddlers, was surely not meant to be at this party. But we went for it anyway.

“We’re here with the caterers,” my new friend asserted, leaning over me as I nervously hummed to myself and looked away. The guard asked what we meant. I was sweating bullets, but something changed in me then. I wondered, what’s the worst that can happen? They’ll say no and you’ll turn around and leave.

In a moment of soul combustion, I said, “Let’s pull over up there, we can call them.”

The security guard… was totally fine with this. We passed the gate, pulled up to the doors, hopped out of the car and, without looking too guilty, I turned to take in a marvelous sight. Another vehicle had taken our place in line, and we had done it.

I’d always been afraid of being in trouble, but in my younger years I’d yet to pinpoint what about being “in trouble” really distressed me so.

The next three hours or so were spent strolling around like we owned the place and, truly, wasting the opportunity to make up a great backstory. My new friends and I enjoyed each other’s company so much that we all but ignored the lavish party going on around us. Gorgeous dresses, faces I recognized — nothing else really mattered because the best part was reveling in our sneakiness, and we didn’t have to prove ourselves to anyone else at that point.

I’d always been afraid of being in trouble, but in my younger years I’d yet to pinpoint what about being “in trouble” really distressed me so. The fear of disappointing someone, the guilt I’d feel after, was what kept me in line. Not the stress of some overwhelming consequence — I wasn’t concerned with being labeled a troublemaker, or hearing “no,” it was simply this idea of being out of favor with a person of authority that made me feel squeamish and desperate.

I’ve learned there are stupid risks, and there are calculated risks with personal payoffs. I felt like a total badass that night, and nothing we did was hurting anyone. That, in my eyes, is a successfully sneaky adventure worth the minor consequences that threatened to stop us.

I still need to remind myself that I’m more afraid of the idea of “being in trouble” than what that really means. The thought of being out of favor with people used to stop me from speaking my mind because I was afraid of not being liked and accepted. I’ve learned that is no way to live your brightest timeline.

These days you can find me sneaking bites of garnishes from bar setups and occasionally jaywalking across the street. I'm most likely going to sneak into a hotel pool this summer because ambling through a lobby and standing in an elevator that just happens to be zipping up to the roof is not a crime. "Wait — you have to be a guest? I'm sorry!" This, as they say, is how we do it.

More like this
13 Summer Solstice Quotes To Celebrate The Longest Day Of The Year
By Sadie Trombetta
GIRLI & Q Fell In Love At A Skatepark & Never Looked Back
By Jessica Morgan
Why You're Seeing Green Bandanas At Abortion Rights Protests
By Lexi Inks
How To Come Out Online, According To Trevi Moran
By Melanie Mignucci
Get Even More From Bustle — Sign Up For The Newsletter