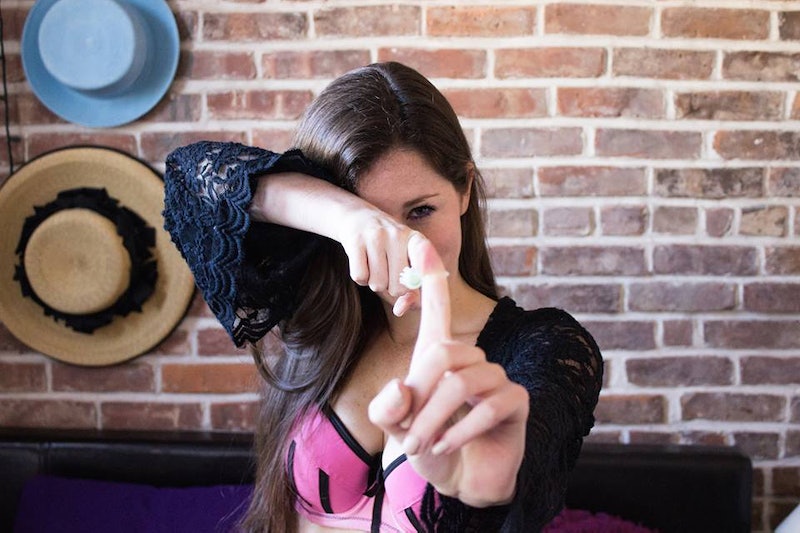 A new sex position every day for a week? No problem! Journalism! I thought. How wrong I was. Oh, how very wrong.

I explained the challenge to my partner. He wasn’t enthused about having me write about his sexual habits. Of course, I’ve written about his sexual habits approximately 6.7 trillion times, so I was used to this little game of cat and mouse. He complains. I explain why we need to do it. He says “Yes” because he is obsessed with me. I promise not to use his name, etc.

I get my way. Everyone is happy. I decided to make the sex spontaneous as possible, while maximizing my chances of pulling this off. I figured we’d start with the positions we love the most: Doggy style, missionary, and open-legged spoon; and then maybe move onto more adventurous positions.

I wanted to avoid cowgirl at all costs. I am a pillow princess and only like to have things done to my body. I don’t like sex that feels like a cardio workout. I don’t want to be forced to wash my hair on a non-hair-washing day because I broke a sweat.

Lastly, it challenge to keep the magic alive. We had to try and avoid making this experience too clinical. Boners are kind of hard to keep ~hard~, when your partner thinks he’s being judged on his performance.

And so, we embarked on this journey. I tried a different sex position, every day for a week and this is what went down.

I had just gotten back from a solo-vacation so I figured we may as well get the show on the road. Obviously, BAE and I were itching to get naked since we hadn’t seen each other in nine days.

The third day was a Saturday, and we were both hella randy so, we were ALL ABOUT THE SEX. We went to our favorite position of all: Lifted Missionary.

Lifted missionary is just missionary with some pillows under your butt for easier insertion. I love this position because I get to do no work whatsoever. I can just lie back and enjoy myself. I finished during sex, but my partner wound up finishing after a la hand job.

This is where sh*t got weird. We talked about doing a 69, which we’ve only ever done a handful of times and were both really into the idea of trying this out. It was an epic fail.

My partner decided he was NOT having it after about 20 seconds. I was “suffocating” him with my vagina, apparently.

Needless to say, the wind was knocked out of my sails and I was back in my robe, scrolling through Octavia Spencer's tweets pretty quickly.

At this point, we were in a routine. Unfortunately the whole, “Keeping it natural” thing hadn’t been working out. To illustrate, I even said, "We have to have sex every day, so what do you want to do?" over dinner.

We had sex in sit to stand, with Fin as part of the fun again. I lit some candles to try to bring our sexy back or whatever. At the end, I could tell my partner really wanted to change positions. but we couldn't so he just soldiered through.

I had almost gotten away with skipping cowgirl, but alas, on day six my time had come. My partner was so excited about the idea of cowgirl, and we were so worn down by the pressure of the experiment, that I was not about to say no.

While I was on top, we had a five minute discussion in which we went through all the positions we had done thus far. Yes, while we were having sex.

After we finished talking about having sex while having sex, and to my surprise and delight, the (present) sex was actually pretty hot. I don't usually come in this position because cardio, but I did this time. Again, he had to finish himself off since I got tired, but c’est la vie.

The final day didn’t feel like the last leg of a journey, even though it certainly was. We were both randy, and everything felt very natural. Perhaps it was endorphins rushing our bodies, since we knew this was almost over.

I have a love/hate relationship with flat doggy. I love this position because I get to lie on my stomach and chill, but I don't like it because I can't orgasm this way. Since i’m lying flat with my legs closed, it’s impossible to reach my clitoris.

Staying in one position took its toll. My partner was so exhausted by the end because, while he loves flat doggy, it's usually his "grand finale" move after a series of other sex positions. Plus, he was wiped out from Crossfit.

My partner and I have enough sex, but we definitely don’t do it every single day. I thought this would be the most challenging aspect of the experiment. We’re very about missionary position. I figured, what the hell, doing just one position couldn’t be that hard for us.

I actually found out a lot about how I have sex; stuff I didn’t even notice. I was surprised to discover that we change positions more often than I realized during sex, and that staying in one position is exhausting.

In most sex positions, one person is doing most of the work. If you stay in said position for a long time, you begin to wonder if perhaps this is the end; that you will cease to exist and perish during this pretzel sex position, due to cardiac arrest. You wonder what your mom will tell her friends about your untimely end, “she died whilst getting the D!”

Anyway, my point is: Doing a new position, every single day, for an entire week is hard AF.