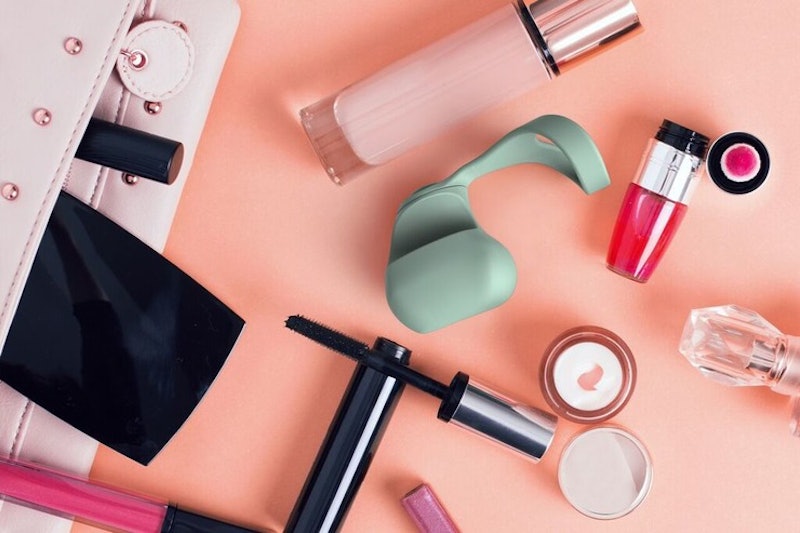 “The whole thing is actually a coincidence,” Fine, Dame Products’ Co-Founder and CEO tells Bustle. “In June 2014, I met Janet through mutual acquaintances that strangely enough, thought we were the same person. Crazy, right? At that time, I had basically been going around from meet up to meet up, looking for engineer to help me bring my concept to life. At the same time, Janet had told a friend that she was starting a sex toy company — and voila! We got in touch, realized how similar our vision was, and got to working."

Considering 75 to 80 percent of women need clitoral stimulation to orgasm, this product, similar to Eva, is also revolutionary in many ways. Its Dame Products' way of taking their mission to close the “Pleasure Gap” between men and women even more, because seriously, the ratio at which men and women achieve orgasm is definitely something that needs to fixed.

In regards to the process for creating Fin, compared to Eva, things were a bit different this time around. As Fine tells Bustle, "We've left ourselves more time and managed our expectations appropriately. We've tested Fin with more people, gathered more data, and acquired better results!"

"We believe that we will not have true gender equality until we have pleasure equality."

"After identifying key features (which for us were: ease of use, versatility, and unobtrusiveness) we got cracking on a range of potential products. Using our fleet of 3-D printers we were able to create prototypes quickly, send them out for testing and then iterate on those designs until we had something we were proud of. It's a human centric design approach, which is not widely used in the space because it takes a lot of work, but we believe it results in better products and your vulva deserves it!"

But Back To That Pleasure Gap

Whether you call it a “Pleasure Gap” or an “Orgasm Gap,” the difference in how often men climax compared to how often women climax in heterosexual relationships is huge. According to a 2015 Cosmopolitan survey, 57 percent of women orgasm “most” or “every time” they have sex with a partner. However, on the other hand, that percentage is 95 for men. The same survey also found that 72 percent of women reported their male partners finished before them, then didn’t even bother to help them achieve orgasm, too. (Come on, guys!) Which, of course, just keeps that orgasm gap wide open, contributing to overall gender inequality.

But Fine and Lieberman want otherwise; they want a future in which that gap no longer exists. “We believe that we will not have true gender equality until we have pleasure equality,” Fine tells Bustle. “Everyone has the right to sexual pleasure!”

And she's right. Between Eva and Dame Products' latest, Fin, we're well on our way to zipping that gap right up, one orgasm at a time, and keeping it closed.