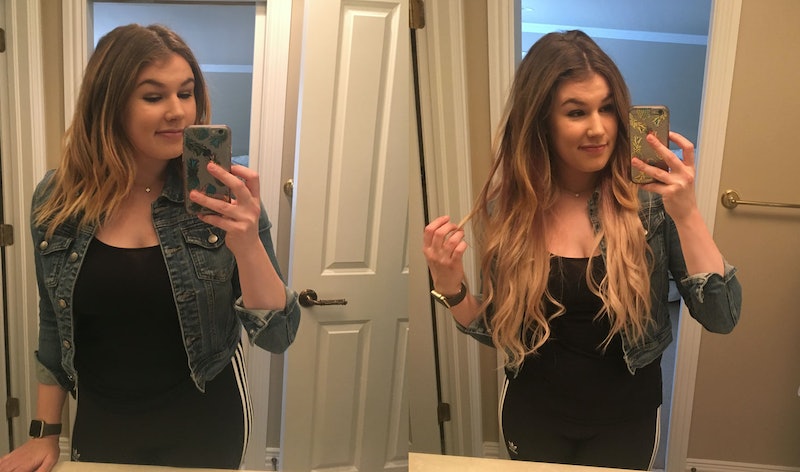 I've cycled through quite a few hair phases over the past 24 years: chunky middle school highlights, ombré, balayage, sideswept bangs, blunt bangs, lobs, and hair short enough that it just barely fit into a ponytail as a little nubbin. And that's just a sampling. But the one hairstyle I could only have in my dreams was silky, lustrous long locks.

Long hair has always felt just out of my realm of possibility (the longest it's ever been was just below my collarbone). When I'm feeling restless — which, admittedly, is often — my first instinct is to change my hair, and the easiest way to do it is to chop some off. Maybe it's a control thing, or a lack of patience. In any case, I've never given my hair a chance to grow out.

In the wake of a big move and a job change, I've been itching to do something different with my hair. So when Barefoot Blonde Hair offered me the chance to make my mermaid aspirations come true and try clip-in hair extensions, I couldn't resist finding out what I'd really look like. Plus, it seemed less risky than plan B, which was dying my hair platinum blonde. (Maybe next time.)

Created by Amber Fillerup Clark, the woman behind the Barefoot Blonde blog and queen of gorgeous, natural-looking hair extensions, Barefoot Blonde Hair Extensions are the latest and greatest to hit the market. There are 20 shades to choose from, and Fillerup Clark matched my gradient hair to a hue called Honey Dipped. There's also a color matching guide on the site, along with some amazing styling tutorials for cool braids and updos that I'll definitely be trying out.

But first, it's all about mastering the basics. I watched her video on how to put in clip-in hair extensions (they're also great for adding volume and thickness to hair that's already long), as well as this tutorial specifically for shoulder-length hair.

Then, I jumped right in. The extensions arrived in a pretty box along with some guidelines. A few big ones to note: You can gently wash, condition, and air dry them flat on a towel them after about 20 wears (they're made of real hair, but since they're not attached to your scalp, they won't produce natural oils). Try not to sleep in them, but if you do, braid them to avoid tangling. You can brush them with a soft bristle brush when they're not wet, and store them in a dry place. I found a handy Pinterest hack to clip them to a ribbon tied around a hanger, so they don't crease when they're stored.

As for blending them in with short hair, Fillerup Clark told me that a curly or wavy style was my best bet. "It breaks up where the ends of where your hair is and gives texture," she says Since they're real hair, you can heat style them, but proceed with caution. "The thing with extensions is that once they are damaged from heat, you can't repair it as well as you can your normal hair."

Use the lowest heat setting that'll do the trick, she says (this is best for keeping your real hair healthy, too). "To style using hot tools, I recommend putting all the extensions together and closing the top off in a drawer so they are secure, and curling them like that. Curl your natural hair and then put the curled extensions in." My hair was already a little wavy (as were the extensions), so I decided to just touch up the ends when I was done.

Another trick for blending them in with shorter hair is to section off the hair below your ears, braid it all to one side, and then bobby pin it to the other side of your head (as shown above). Clip the rest of your hair on top of your head. This helps avoid an obvious line on the underside of your hair where your real hair ends and the extensions begin, and it also gives the first "weft" something to clip onto.

Per this tutorial from Buzzfeed, I also clipped up the small front sections of hair in front of my ear, so I could clip the single-clip wefts to the sides rather than the back.

I was surprised at how secure they felt once you slid the prongs into your hair and "snapped" them toward your head to keep them in place. One thing I learned from trial and error: Make sure you're clipping them into the section of hair that's already down, not accidentally into the section that's still clipped up (it creates a pretty obvious bump when you take the next section down).

Overall, it took me about 15 to 20 minutes to put the extensions in the first time, not including styling time. Even if it took me several hours, though, the result would've been totally worth it.

Pretty neat, right? Truly, I've never felt more like a Disney Princess/the blonde version of Kyle Richards from The Real Housewives of Beverly Hills. Blending them in to look natural takes some practice, but I've been surprised at just how legit they look.

I've found that clipping a couple of front sections of my real hair into a half-up style helps them look more real, and Fillerup Clark also reccomends playing with chunky braids to blend them. "Hairstyles are so fun with clip-ins because you can move them around to make braids and twists thicker," she says. "Once you try a braid with extensions, you won't be able to go back to normal braids."

I don't even think I can go back to normal hair after this. I'm officially a clip-in convert.

More like this
How To Curl Your Hair With Leggings, According To TikTok
By Carolyn Steber
An Honest Review Of BeautyTok's Beloved Sleepy Tie Hair Tool
By Rebecca Strong
This Week’s New Makeup Releases & More Beauty Headlines
By Audrey Noble and Erin Stovall
Indiyah's New Boots Beauty Box Is For Heartbreakers Everywhere
By El Hunt
Get Even More From Bustle — Sign Up For The Newsletter
From hair trends to relationship advice, our daily newsletter has everything you need to sound like a person who’s on TikTok, even if you aren’t.