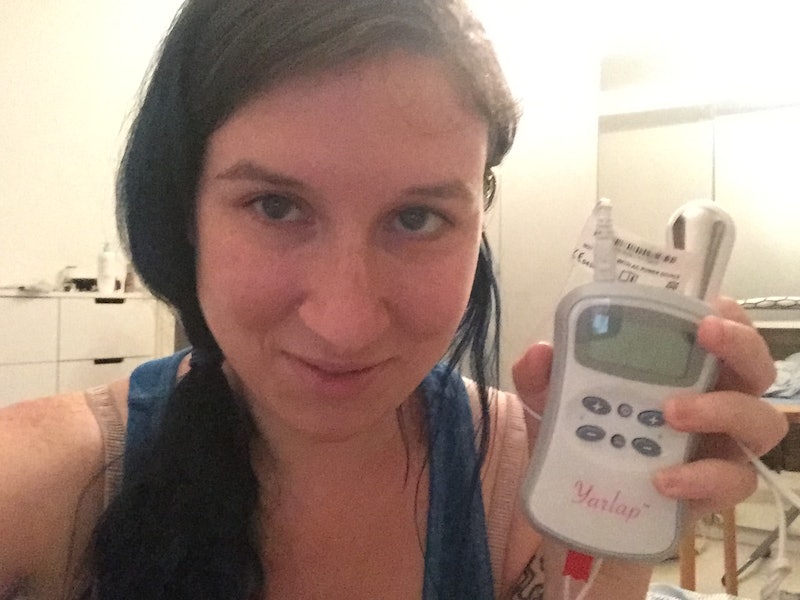 I've always been a fan of Kegel exercises and the various devices that can help you out with them. But when a friend recommended a Kegel exerciser that delivers electric pulses to your vagina, I was a bit skeptical, to say the least. Did I really want an electrical current running through (or anywhere near) my privates?

But then, I talked to MaryEllen Reider, Director of Sales Development for Relevium Labs Inc. — the maker of the Yarlap pelvic floor stimulator — and I became intrigued. The main purpose of the Yarlap is curbing urinary incontinence, which one in three women suffer from, but users have also said it's given them more and better orgasms. And according to a paper in the Journal of Women's Health, Issues, and Care by Yarlap's designer Brent Reider, toned pelvic floor muscles can also help with pain in the lower back, knees, and thighs. So, I decided to give it a shot.

When I first took my Yarlap out of its pink bag, I was pretty intimidated — not just by the whole electricity thing but also by all the buttons on the control panel. But once I got the hang of it, it was pretty simple. You can select from six programs with different pulse frequencies and lengths, and you can also increase or decrease the intensity. It'll go up to 80 mA, but most women stay between 20 and 40. Below 20, I could barely feel it, but above 40, it became painful. Unlike most Kegel exercisers, it doesn't require you to squeeze your muscles — the electrical pulses make them squeeze.

I was experiencing more vaginal contractions, or at least I was more aware of them.

After a few weeks of doing this every few days, I tried to figure out if it had had any impact on my sex life. I don't suffer from urinary incontinence, so I couldn't measure that outcome. And I didn't necessarily find myself climaxing more easily or powerfully. But I did notice one thing: I was experiencing more vaginal contractions, or at least I was more aware of them.

When my partner would touch my clit in a way that felt really good, my vagina would open and close — just once, and not as pleasurably as it does during orgasm, but in a similar way. Now, when I'm sitting on my couch and feel like treating myself, I'll reach down and find that magic spot that can trigger a contraction. I even sometimes feel my vagina contracting after just thinking sexy thoughts.

I asked Reider if this could've been due to the Yarlap, and she said yes. "Your muscles are trained to properly respond to the action of the orgasm, so they’re prepping for the moment," she says.

One anonymous Yarlap user told me the pleasure she gets from it actually does trigger orgasms. She usually orgasms if she does 200-300 Kegel exercises, and since Yarlap does them for her, it usually makes her orgasm without any effort. "It's really taken my multi-tasking to the next level!" she said, adding that a partner of hers could feel her increased vaginal strength.

Another Yarlap user told me she orgasms more easily than she did before using it and has an easier time holding it in when she has to use the bathroom. "Sometimes, when I'd go out for a run, I'd have to pee really badly and a couple of drops of pee would come out before I could sit on the toilet," she said. "That's gone now. High 5, Yarlap."

As our three different experiences show, it's impossible to predict how using a device like Yarlap will affect you. But in general, Kegel exercises are good for you, and this provides a fun and easy way to do them.

More like this
How Do I Deal With Both ED & Premature Ejaculation?
By Sophia Benoit
The Best Time To Date After A Breakup, According To Experts
By Bustle Editors
Are Quality Time & Physical Touch Love Languages Compatible?
By Lexi Inks
Why Experts Say Sleeping With A Fan On Isn’t Totally Risk-Free
By Sophie McEvoy
Get Even More From Bustle — Sign Up For The Newsletter