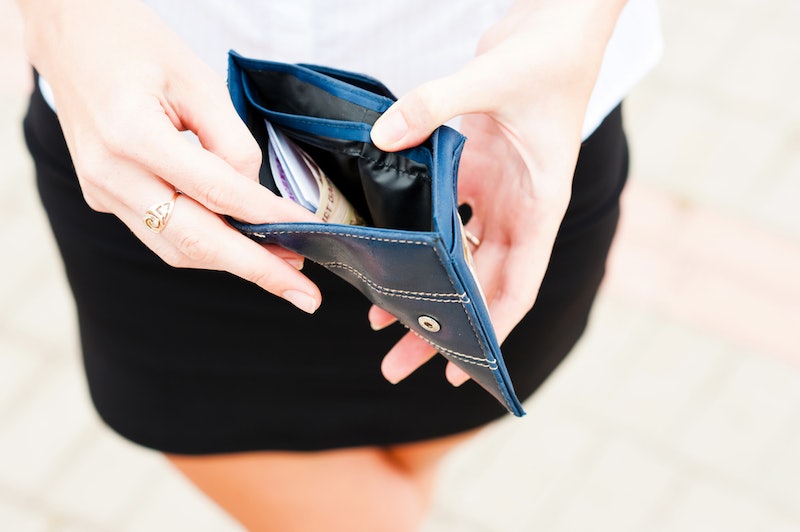 One of my 2019 goals was to get better about saving my hard-earned money and finally take charge of my lack of real approach to finances. You know, adulting 101. So, in an effort to reach that goal at the beginning of the year, I decided to try using the money-saving app Digit for the month of January to see if it would help me learn better saving and spending habits. Though the old me probably would have been too paranoid to actually download an app that has access to my precious but oft-ignored bank account under normal circumstances, the "new" me dove right in — after doing some research and learning that Digit is highly secure.

But let's backtrack. My financial 2019 started with a bang. Well, that bang was actually just the uneventful buzz of a text message from my bank telling me there was some “suspicious activity” in my account. There were apparently two potentially fraudulent attempted charges — $200 at a shoe store, and some random attempt to buy something at a no-name mobile company. While reviewing my account, I also discovered a mysterious monthly charge from a local gym that had apparently gone through three months in a row without my knowledge — which was a sobering reminder of my painfully naïve lack of awareness about what was even going on in that bank account of mine. Oops. In any case, a new debit card was on the way, and so was a fresh start.

As described on Digit's website, "Digit analyzes your spending and automatically saves the perfect amount every day, so you don't have to think about it." The idea is that you'll save money without having to actively do anything at all. By tracking your usual account habits (bills, paychecks, average daily spending), Digit is able to safely and smartly snag a little bit of money here and there to store in a "Rainy Day" fund, without you really noticing that it's doing anything. You can also create goals in addition to the Rainy Day fund and have Digit start saving money for specific things, too.

The app is so confident in its ability to do this safely, in fact, that if an overdraft ever results from a Digit withdrawal, it'll pay the fee for you. Plus, you can set up overdraft protection, so if for some reason things get off and your account ends up dipping below zero, your Rainy Day money will funnel right back in there to make things right. There's also no minimum balance that has to be maintained in Digit, and there's no limit to how many times you can take money out, either.

Digit is free for the first 30 days, and then $2.99 per month after that. Here are some of the highlights from the first month of my experience:

Not to spoil the suspense or anything, but let's cut to the chase: I saved more than $200 in a single freaking month using Digit, which I'm pretty impressed by. I will say, spending felt a wee bit tighter than usual, but it definitely didn't feel like I was $200 short at any point.

I was honestly kind of surprised that saving $200 didn't end up feeling more difficult, given that I have tried doing automatic or manual monthly transfers to my savings in increments smaller than that many times — but I almost always end up having to undo it, or at least pull a little bit of the overly-idealistic transfer amount back into my checking to cover something.

After pondering this phenomenon, my theory is that there’s something about funneling the money out in relatively small, periodic chunks that makes saving easier to manage (at least for me). It’s almost like you suddenly picked up some weird new habit that’s causing you to incrementally spend a little more money, but it's not like a large sum ever goes missing at once, so you kind of just adapt. OK, thanks for letting me wax fancy, feel free to send me your own theories, too. In any case, the long story short is that I saved money, and I didn't really miss it.

2. It Doesn't Require Much Work

I know some people like the feeling of managing many things. But me? I just pray every day for the universe to grant me a personal assistant who can think about all my worldly affairs for me and leave me to ponder the meaning of my own existence in peace. Using this app can definitely be an interactive experience if you want it to be, but you don't have to take advantage of those perks if they're not your style. You can pretty much just ignore the app entirely, and check in here and there to see how much money you've saved without any effort. It's a win-win.

3. I Became More Conscious About Money

An interesting plot twist is that using an app to track my money actually helped me become more financially aware. How is this possible? Well, Digit and I were chatting a lot over the past month. Like, basically, Digit became my text message inbox's new ride-or-die. It all started when I downloaded the app, and it immediately texted me its contact information card and a nice little hello.

Please excuse the 109 unread text messages currently in my inbox. I know it's alarming. I'm working on it.

On Jan. 7, less than a week into my Digit journey, I was notified via text message (very convenient) of my first Rainy Day savings transfer. $6.50! An amount that I would have mindlessly spent in a heartbeat on some sort of over-the-top matcha oat milk lavender latté anyway! The message was accompanied by an enthusiastic GIF, which I appreciated:

So, things carry on. Almost every day, Digit texts me greetings in the morning to let me know what is happening in my bank account, and updates me on the savings it's making. Seeing these daily updates made me more aware of my spending habits, and I knew every morning exactly how much money was in my account.

Toward the end of the month, I low-key thought I was being ghosted. Digit had been silent for like, three days. Did this A.I. just butter me up with "good morning" texts and GIFs all to steal my money and run? I decided to take initiative and ask. Turns out it was still around; it just didn't save any money for me for a few days ~for my protection~ so it stopped updating me.

So, here's the long and short of it. This app was extremely useful for me and I had a positive experience with it. It did its job in that it saved me what I feel is a significant amount of money in a short time without burdening me financially, and it also subsequently helped keep me on top of my finances and stay aware of my budget through its helpful texts and account/spending updates. I think I'm keeping my account even though I'll have to pay $2.99 per month now.

That all said, if you're someone who is already super on top of saving and budgeting and hyper-aware of what's happening in your bank account at all times (Capricorns — I'm lookin' at you), then honestly, Digit might not be the hugest game changer. But if you are, on the other hand, not the best at saving or paying attention to your lil' collection of digital currency, then Digit might be an effective way for you to save some money and learn a little bit about how you spend it. Happy savings!

Bustle may receive a portion of sales from products purchased from this article, which was created independently from our sales department. This article reflects price at publication and may change.