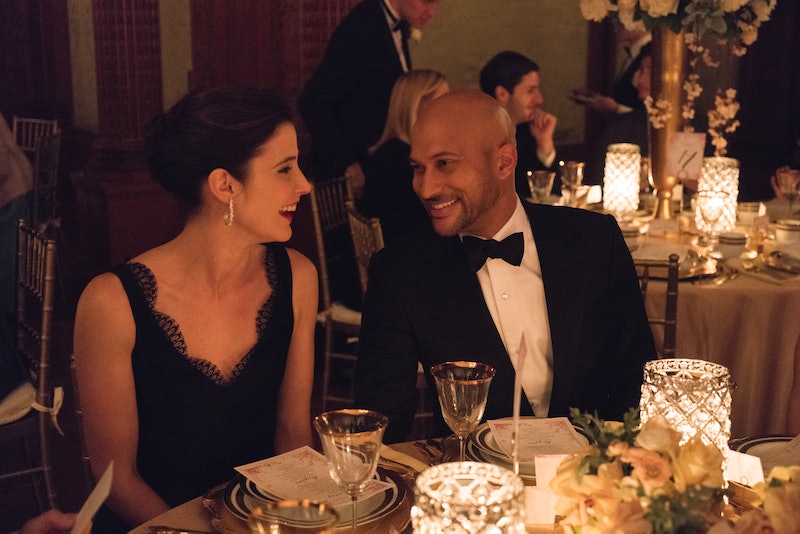 "So it's set in a dystopian hellscape," jokes showrunner Nick Stoller on the set of Friends From College. He was, of course, referring to the present. In 2017, it's difficult for current popular culture to be viewed without a "post-Trump" lens. While most of that is coincidental, as these shows and films were conceived and shot early last year, I and two other journalists visited the set of Friends From College, a Netflix series about nostalgia and how it has the ability to take over our lives, less than a week after the election last November. The new reality was fresh, but the clouds broke for the first time in days (literally and also metaphorically for me) and we got to see a comedic ensemble at work.

Nostalgia is something that Netflix has already banked on heavily, with revivals of Gilmore Girls, Full House, Arrested Development, and Wet Hot American Summer — then in a different but notable way with Stranger Things, a series whose creative sandbox is filled with pop culture nostalgia from the '70s and '80s.

The concept of nostalgia colors the lives of each of these characters in different ways. Jae Suh Park, who plays the bohemian Maryanne, describes it as a kind of "safety" that her character holds onto, even though they need to grow up. "What's appropriate for the present?," she says. For Annie Parisse's character Sam, the nostalgia is about fear and not wanting certain things in life to end. She's "hanging on to an aspect of her past," says Parisse, "and hanging on to her youth. Fearful about stepping forward into 'adulthood."'

For Lisa, played by Cobie Smulders, nostalgia is a burden and a source of insecurity. "They call her 'froshie,'" says Smulders. Lisa joined the group later, when she was a freshman and they were all seniors. "She's always gonna be the young one ... and she never feels quite even with them. She's always gonna have something to prove with this friend group."

Nick, a trust fund kid played by Nat Faxon, uses nostalgia as a reality check. "Nick needs something to ground him," says Faxon, "and something to give him a little bit of direction — whether it be regret or whether it be prognosticating about what could have been." That's what has "shaped his trajectory," according to him.

However, the biggest "user" of nostalgia is Lisa's husband Ethan, played by Keegan-Michael Key. "He's a nostalgia junkie," says Key. "He can't move past his past." At one point in the series, Ethan and Lisa are sort of bluntly referred to as "nostalgia humpers." Can I just say, of course the guy who dated a freshman when he was a senior has trouble letting go of college. He basically went through it twice. Ethan "is trying to derive pleasure from a thing that can't be anymore," continues Key.

On the drive to set upstate, and during breaks that day in 2016, our small group chatted about then-upcoming shows like The Handmaid's Tale and American Gods, which have both now taken on a new meaning and power thanks to this administration. The election didn't pervade the entire day, don't get me wrong. Everyone was ultimately there to work.

As a director, Stoller was almost always on his feet. He would run from the monitors in "Video Village" to the set and give an adjustment, or a joke suggestion. "It's hard comedy," he assures us. "It's not like a cable comedy that's actually a drama."

While the atmosphere was still a little weird with people still processing the election results, everyone was moving not on, but onward — something that can't always be said for the characters on the show.

"For some reason," says Key, "being in this moment is harder than looking back or forward." That's what Friends From College is ultimately exploring. While it's decidedly a comedy that will make you laugh out loud, not chuckle quietly to yourself, it's an exploration into a phenomenon that everyone can relate to, especially now.