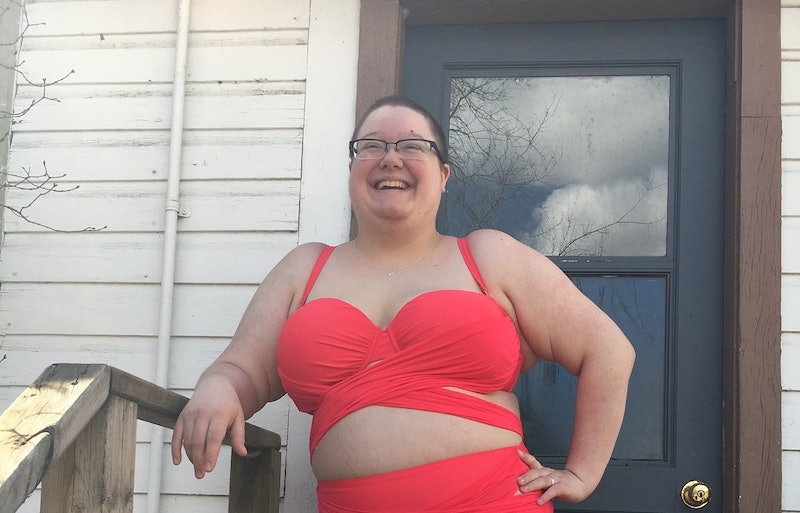 I stopped wearing swimsuits at age 15. I was in the middle of high school, and suddenly it was like I was seeing myself for the first time, and not in a good way: I was plus size, with a self-described Captain America shoulder-to-hip ratio. A peer told me boys didn't want to see ugly girls in swimsuits, so I made sure no one had to.

Now I'm 24, and not a girl—I'm transgender, and identify as both nonbinary and transmasculine, which means I'm not comfortable being called "woman" or "man," but I identify more strongly with masculinity than femininity. For the past nine years, my "swimsuits" have consisted of board shorts and tank tops.

Teenage me had never heard the word "transgender," let alone encountered the myriad of diverse conversations about how we can (and should) decouple things like clothing from set gender roles. Untangling gender is complicated, and sometimes it makes no sense to even me why I now want to embrace some of the traditionally feminine things I didn't embrace as a teen.

When I received an email from inclusive clothing brand Swimsuits For All, who has collaborated with rock star plus size models and designers like GabiFresh and Ashley Graham, I was stoked, but also apprehensive. I'd had my eye on Swimsuits For All's pieces for a while, but that voice from high school kept telling me, You shouldn't wear swimsuits. No one wants to see this. That voice is a terrible secret I have, as a body positive writer: I love all fat bodies, except for mine.

So I sucked it up, thought, Do it now or you never will, and asked Swimsuits For All to send me some pieces from their 2017 collection. The brand spoiled me, sending me three wildly different suits, plus a cover up. I received the ruffled, one-shouldered Portofino, the strappy, eye-catching Wish Underwire Bikini, the classic Wine Crossover Swimdress, and the Black Jumpsuit cover up.

I have to admit, I was worried. I mentioned I have what I see as the Captain America ratio (minus Chris Evans's muscles), and I was anxious that my relatively small hips and big shoulders would throw off the brand's ability to size for my body correctly. I ordered the pieces based on my bust size — 52 inches — tried to align that as closely as I could with my hip size, and hoped for the best. Luckily, the best is exactly what I got.

My hands-down favorite is the Portofino, which amazingly looks incredible, given that it's trying to embrace my shoulders with its delicate strap and neckline. It felt too small as I was putting it on, giving me a momentary hiccup of panic, but once it was on, I realized its size was an advantage. The "too small" squeeze I felt was actually perfect for my hips.

The Portofino doesn't have built-in cups like some of Swimsuits For All's other pieces, but since I'm used to wearing a binder for my chest, I'm pretty used to the feeling of my breasts being pinned in place. If that's uncomfortable for you, you may want to check out one of the brand's cupped pieces.

While I stayed away from swimsuits for personal reasons, I also avoided them for practical ones, like the simple lack of widespread availability for folks my size. I can't wear bikinis that are little more than cute scraps of fabric. I need cups. That considered, the Wish seemed like the ideal choice. It's high-waisted enough that I feel like my stomach is covered, but it also has these legit sexy slits over the hips, which make me feel like a million bucks, even when I'm at my shyest.

I also got this jumpsuit, which is technically a cover up, but which I'm also going to wear literally everywhere with zero shame.

So yes, this was originally supposed to be a review about swimsuits — but when I asked to write a piece about these swimsuits, my editor told me I needed to include photos. And, logically, I knew those photos would ideally be #bodyshots of me in the suits. I felt my stomach shrivel up.

I've used photos of myself for Bustle articles before, but this was a whole new adventure. And looking at the photos I've embedded, I'm not entirely comfortable. I see flaws. I see my genuine laughs (thanks to my wife, who was taking the photos) morph into a slightly manic "I'm really uncomfortable" smile post-mortem. I know people will look at my body and think terrible things. But I also know there are people who will feel warmth toward me, and those are the people who matter.

Like other internalized poisons, this instinctive desire to hide my fat body will take a while to flush out of my system. These #bodyshots are a step forward. Soon, hopefully, I'll take another.