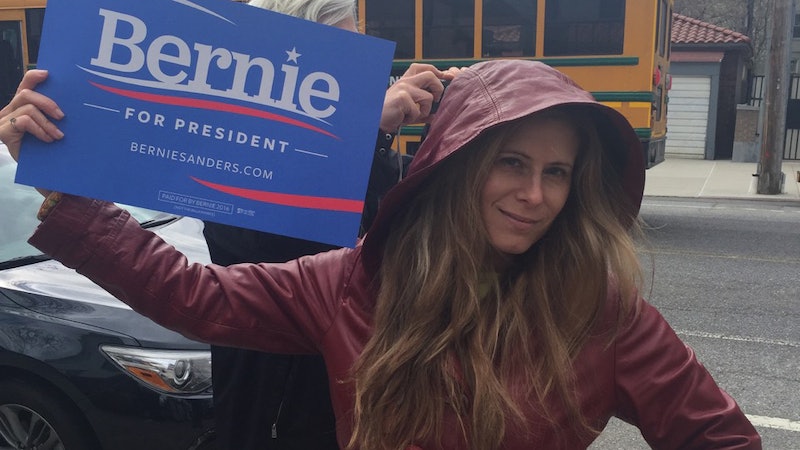 In this op-ed, writer Stefanie Iris Weiss reveals why she's all-in for Elizabeth Warren after being a Bernie Sanders supporter for years.

I’m a longtime Democratic Socialist, like, way before it was cool, so I was over the moon when Bernie Sanders announced his candidacy in 2015. At long last, someone who embodied my progressive values was on the national stage. I’d waited all my life for an answer to the neoliberal Democrats who were mostly fine on social issues but ignored my other policy priorities, so I wept with joy and pride through all of Sanders’ debates with Hillary Clinton.

When Sanders came to New York City for the first time during the primary, I went to greet him at a campaign appearance on East 26th Street in Brooklyn, where he grew up. That is the very street that my mother was raised on, and I spent a lot of my childhood there, so it felt even more like a special homecoming. I wrote glowing op-eds about Sanders.

When he lost the primary, I mourned. But I also volunteered and voted for Clinton in the general, because I knew how dangerous and vile the alternative would be. And yet life under the fascist Trump regime is so much worse than I feared or imagined. It is precisely because of The Handmaid’s Tale-style dystopian nightmare we live through each day that I’ve decided to support a woman in 2020: Elizabeth Warren.

I still adore Sanders and the policies he promotes. I love his grouchiness, his accent, and that he could be a stand-in for my own Jewish zayde (that’s Yiddish for grandpa). But I’ve let go of my dream of seeing the first Jewish president inaugurated, for now.

In turning from Sanders to Warren as my preferred candidate, I took stock of my leftist values and my feminism and landed on something essential: A woman must be president. After all we’ve been through since Trump was elected, that is my bottom line. Lucky for me, a woman who embodies my values is running. Whatever it is, she’s got a plan for that.

She just gets it — she understands marginalized women’s experiences in our culture and our economy.

With a brazen, unapologetic, alleged serial sexual assaulter in the White House, we must replace Trump with a woman. We can only turn the tide of patriarchy and toxic masculinity in this country if a woman debates him, beats him, humiliates him, and forces him out.

Advice columnist E. Jean Carroll’s sexual assault allegation against Trump is a new level of repugnancy that has unleashed my womanly wrath. Then there's the Access Hollywood tape, the women who have come forward to accuse him of varying degrees of sexual assault, and his ex-wife’s (recanted) accusation of rape in her divorce deposition (Trump denies all these allegations, and has called several women who have accused him of sexual misconduct “liars”). All that illustrates a pattern of aggressive, coercive, and abusive behavior toward women that defines who Trump is: a man who does not see women as human beings.

I am, in writer Rebecca Traister’s wise words, “Good and Mad.” My righteous rage must be answered with a woman in the White House.

Even though their plans differ in some ways, for me, Warren is closest to Sanders in all the ways that matter. She believes in the Green New Deal, has a green manufacturing plan, and a plan to stop drilling on public lands. She is a co-sponsor of Medicare for All, and she reaffirmed her commitment to it at the Democratic debate this week. She has a student loan plan that would cancel debt for more than 75% of Americans. Yes, it’s true I’d prefer all college debt be canceled like Sanders is suggesting, but I believe that these details can be worked out and that Warren will move further to the left if the base demands it. I know I will hold her feet to the fire.

Even though Sanders has focused on ending income inequality for years, he has not come out with an exhaustive plan about exactly how to do that, even though he ran in the Democratic primary four years ago. By contrast, Warren put out a comprehensive plan to tax the wealthy a few months ago. I almost shrieked with glee when I read about her "ultra-millionaire tax." She also plans to include assets in assessments of wealth, which no taxation plan has ever done before. I like that Sanders wants to tax Wall Street 0.5% on stock transactions to pay for his student debt plan, but Warren’s plan is much more detailed and far-reaching.

In recent weeks, Warren also came out in favor of decriminalization of sex work. “Sex workers, like all workers, deserve autonomy, but they are particularly vulnerable to physical and financial abuse and hardship,” she said. She just gets it. Warren understands marginalized women’s experiences in our culture and our economy. The next day, Sanders stated he was "open" to decriminalization.

I love that many of Warren’s plans are rooted in a deep understanding of systemic racial and economic injustice and the corruption that feeds it. She has a plan to ban private prisons, an affordable housing plan, a maternal mortality plan, a plan to offer debt relief to Puerto Rico, a universal child care plan. She gets that people of color suffer the most under structural racism. Warren was one of the first candidates to come out for reparations, and on the stump, she shows a deep passion for these issues. Her proposals not only address capitalism’s worst sins, they aim to restructure our system so that it works better for working women, single women, moms, all of us.

After watching Warren’s stunning performance on the debate stage, I know she will persist throughout the primary process and beyond. And I’ll be right there with her.