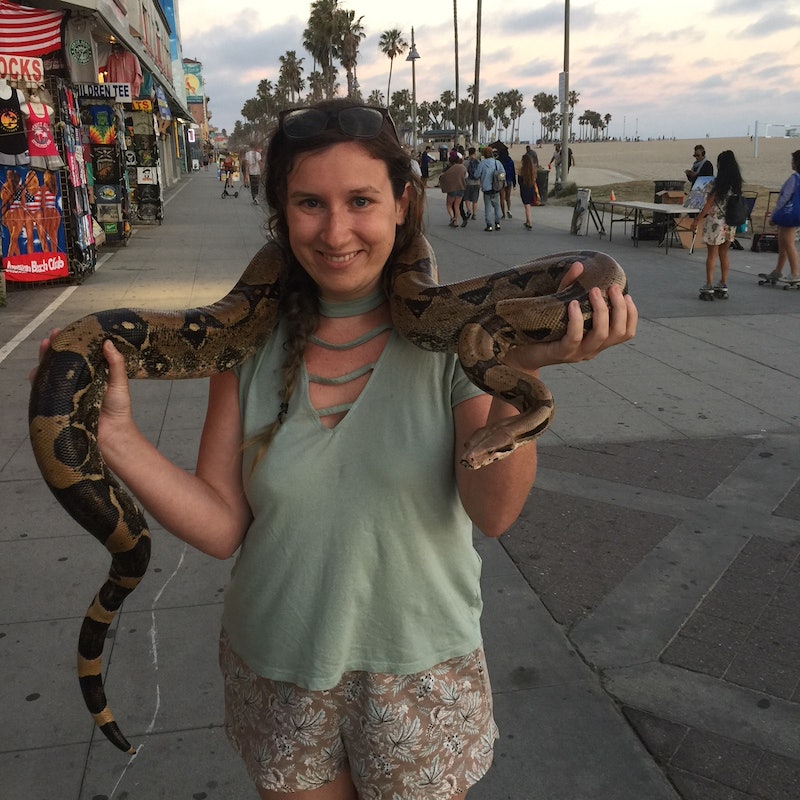 Last month, I was reading Goop's Sex Issue when I came across one of the most Goopy things I'd ever heard of: Sacred Snake Ceremonies, where women dance with snakes to get "out of their heads and into their own bodies and divine feminine power." My first thought was, "That sounds like my worst nightmare." My second was, "That means I have to do it."

Ever since I was a kid, I've had an extreme phobia of snakes. I'll sometimes jump just from seeing people with towels around their necks because I'm so paranoid about coming across a snake. Pretty much anything shaped like a squiggly line puts me on edge. Even though I'm rarely around snakes, I still spend way too much of my life worrying that one will somehow pop up.

But I remember a time in my life when I was not afraid of snakes. I remember holding them at birthday parties and at the local wildlife sanctuary. Around six or seven years old, when the phobia developed, I also developed anxiety about a lot of things. Maybe, I thought, getting to the root of my phobia could help me get to the root of my anxiety.

"No one is the same after a ceremony. It is an initiation into a level of benevolent love and power that is not engrained in concepts or the mind, but deep within the body."

"The snakes help women like nothing else in our culture can," Londin Angel Winters, who holds these ceremonies in Venice, CA, tells Bustle. "They carry the medicine of unapologetic feminine power. Just stepping up to the ceremony forces you to confront your relationship with your own sensuality and embodied power. Then placing a snake on your body and moving with it has the power to awaken something inside of each woman that is truly life-changing. No one is the same after a ceremony. It is an initiation into a level of benevolent love and power that is not engrained in concepts or the mind, but deep within the body."

The idea of stepping into my "divine feminine power" was enticing. After years trudging away at work with little room for pleasure or fun in my life, my inner goddess has been dying to come out. I happened to be headed to LA soon, so I scheduled a private ceremony and willed myself not to think about it for the two weeks leading up to it.

When I arrived on a Monday afternoon, Winters' partner Justin Patrick Pierce led me to the backyard. The first words out of my mouth were, "There won't be snakes there yet, will there?" He reassured me that there weren't, leading me to jump and yelp when Winters came in with a snake around her neck. "I'm sorry," I said. "I'm going to be scared." She reassured me that she'd worked with snake-phobic people before and, after having me sign a waiver explaining the risks of the situation (the snakes aren't poisonous, but they can bite), led me to the shed where the ceremony would take place.

Winters kept her snake around her neck while we talked, which freaked me out at first, but I gradually calmed down as I got used to it. The snake even seemed friendly, nuzzling Winters' head as she spoke about what it means to own your feminine power — or your "omega" power, as she put it. Rather than "masculine" and "feminine," Winters uses the terms "alpha" and "omega" to acknowledge that these traits aren't specific to males or females. However, because we have ascribed gender to them, we've devalued the omega, leading people of all genders to suppress their feminine sides. That's where sacred snake ceremonies come in.

Snakes connect us to our intuition, our sensuality, our pleasure, and other omega traits, Winters explained. Owning your feminine power, she said, means unapologetically listening to the part of you that transcends logic — that just knows things. People who are afraid of snakes are often afraid of their feminine sides, she said. She asked me if I fit that description, and I admitted I did. I was afraid that if I lived from my feminine side, I'd fail to get anything done and would have less success. I got chills as she told me about how she had the same fear until she embraced her femininity, and then even more success came to her.

"Can I ask you something personal?" she then said, as if she'd been divinely guided to say it. "Do you advocate for your sexual needs?" Her question stumped me because the answer seemed to be "yes." I receive even more than I give in the bedroom. I always ask for what kind of touch I need and speak up if something isn't working. But the question lingered in my mind as the session went on.

Since I was too scared to dance with a snake right away, Winters did a dance for me. The snake wound around her neck and waist as they swayed to spiritual music. Their bodies appeared to move as one. Winters' eyes rolled to the back of her head, which she later told me meant she was in another dimension.

There wasn't time to work me up to being able to dance with a snake, but I did take a big leap: I pet the tail several times. The texture of the skin and the way the body moved creeped me out at first, but after a few minutes, I realized it wasn't actually the snake that was creeping me out. The sensation of the snake's body on my skin felt pretty cool. It was my own mind telling me the snake was creepy.

"What about it scares you?" Winters asked. "That tells us about how we relate to other things in life."

"That I can't control what it'll do," I responded. "That it's unpredictable."

"That's how the feminine is," she replied.

After I'd posed for a few photos with Winter and her snake and said goodbye, it occurred to me why she'd asked me about my sex life. I wanted my divine feminine power to be honored and worshipped. I wanted to be out of my head and in my body. I wanted to be in another dimension, like Winters was with her snake. I didn't know exactly what that looked like, but just witnessing her dance gave me a taste of it. As Winters put it, being in the presence of the animal alone provides "snake medicine."

Two days later, I was walking along the boardwalk by Venice Beach when I passed a man holding a snake, who I'd seen there many times. I'd gotten into the habit of walking to the other side of the boardwalk so I wouldn't get anywhere near him. But this time, I walked up to him. As long as my irrational fears governed my behavior, I knew I would not be truly free.

"I'm afraid of snakes," I told him. "But I'm working to overcome that fear."

"Sit down," he said. I obliged, but only after making him promise he would wait for me to take the snake rather than put it on me. I'd figured out by that point that contact with snakes was not so bad when I felt in control. The parallel between snakes and sexuality was becoming obvious.

I surprised myself by being brave enough to put the snake around my neck, and then the man told me to pose for photos. I tried to channel my inner "I'm a Slave 4 U" Britney Spears as I stuck one hip out and put on a mischievous grin.